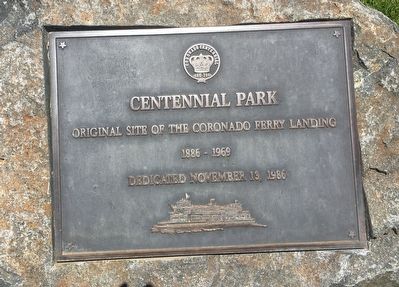 Location. 32° 41.933′ N, 117° 10.335′ W. Marker is in Coronado, California, in San Diego County. Marker is at the intersection of 1st Street and Orange Avenue, on the right when traveling west on 1st Street. Touch for map. Marker is in this post office area: Coronado CA 92118, United States of America. Touch for directions. 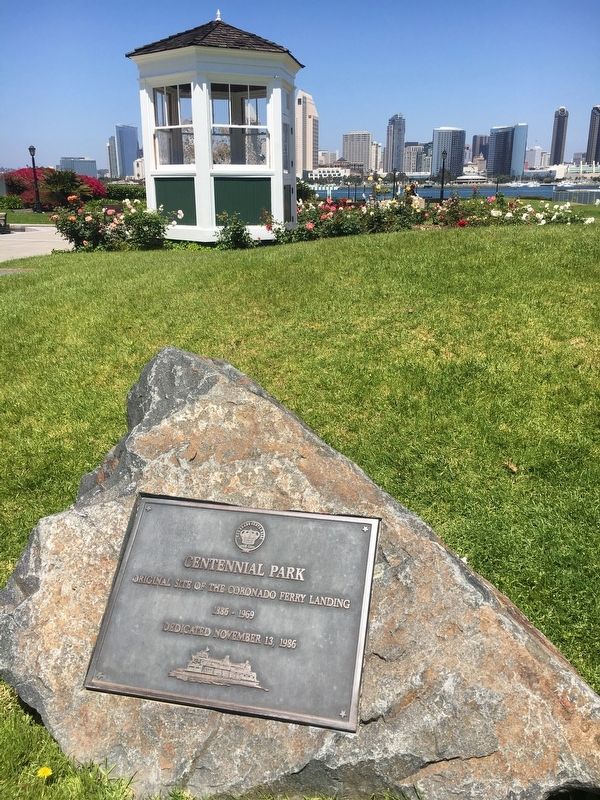 Regarding Centennial Park. Centennial Park offers breathtaking views of the bay, the Coronado bridge and downtown San Diego. It is a hot spot for quinceañera and wedding party photos. The park itself is just steps away, along a beautiful bike/walking path, from the Coronado Ferry Landing which boasts great local eateries and small shops, and even some art galleries. Centennial Park is the historic location that the ferry from San Diego docked to load and unload cars, visitors and commuters. It was still doing this all the way until 1969 when the Coronado Bridge opened. A few local residents, Patty Schmidt, Sally Krummenacher, and Wendy Longley-Cook, were successful in making the area a lovely public park. It opened on the 100th anniversary of Coronado becoming a city, thus "Centennial Park."
Credits. This page was last revised on May 30, 2018. It was originally submitted on May 27, 2018, by Col. James F. Jamison, USMC (Ret) of Coronado, California. This page has been viewed 103 times since then and 25 times this year. Photos:   1, 2. submitted on May 27, 2018, by Col. James F. Jamison, USMC (Ret) of Coronado, California. • Syd Whittle was the editor who published this page.
Share This Page.