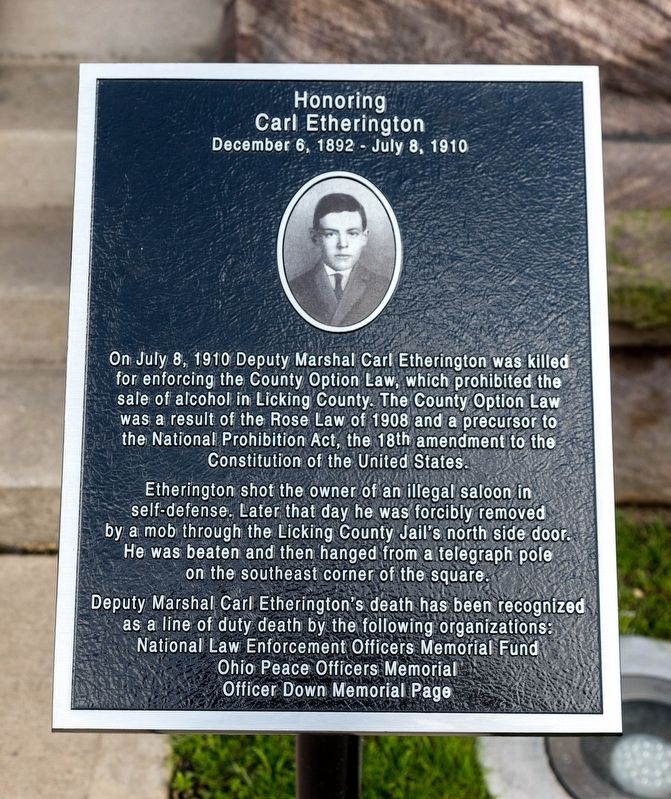 Photographed By J. J. Prats, May 26, 2018
1. Honoring Carl Etherington Marker
Inscription.
Honoring Carl Etherington. December 6, 1892 – July 8, 1910. On July 8, 1910 Deputy Marshal Carl Etherington was killed for enforcing the County Option Law, which prohibited the sale of alcohol in Licking County. The County Option Law was a result of the Rose Law of 1908 and a precursor to the National Prohibition Act, the 18th amendment to the Constitution of the United States. , Etherington shot the owner of an illegal saloon in self-defense. Later that day he was forcibly removed by a mob through the Licking County Jail’s north side door He was beaten and then hanged from a telegraph pole on the southeast corner of the square. , Deputy Marshal Carl Etherington’s death has been recognized as a line of duty death by the following organizations: National Law Enforcement Officers Memorial Fund . Ohio Peace Officers Memorial . Officer Down Memorial Page. . This historical marker is in Newark in Licking County Ohio

On July 8, 1910 Deputy Marshal Carl Etherington was killed for enforcing the County Option Law, which prohibited the sale of alcohol in Licking County. The County Option Law was a result of the Rose Law of 1908 and a precursor to the National Prohibition Act, the 18th amendment to the Constitution of the United States.

Etherington shot the owner of an illegal saloon in self-defense. Later that day he was forcibly removed by a mob through the Licking County Jail’s north side door He was beaten and then hanged from a telegraph pole on the southeast corner of the square.

Topics. This historical marker is listed in this topic list: Law Enforcement. A significant historical date for this entry is July 8, 1910. 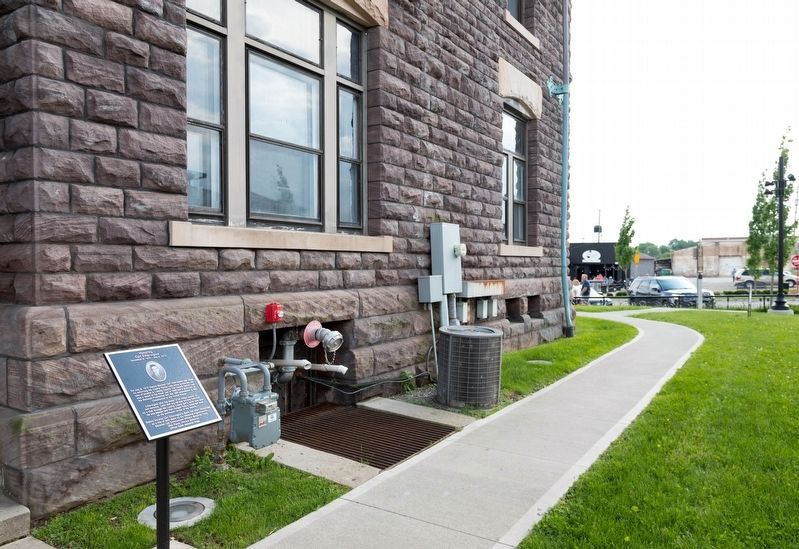 Photographed By J. J. Prats, May 26, 2018
2. Honoring Carl Etherington Marker
It is at the north entrance to the jail.

Click or scan to see
this page online
the right when traveling east on East Canal Street. Touch for map. Marker is at or near this postal address: 46 S 3rd St, Newark OH 43055, United States of America. Touch for directions.

Additional commentary.
1. Blind Tiger Raider
Deputy Etherington is referred to as a “blind tiger raider" in the following newspaper article. “Blind tiger” was an Americanism chiefly of the Southern and Midland United States, for a place where alcoholic beverages are sold illegally. A speakeasy. Also called in places a “blind pig.”
— Submitted May 28, 2018.
2. Article in The Springfield Sun of Springfield, Kentucky, 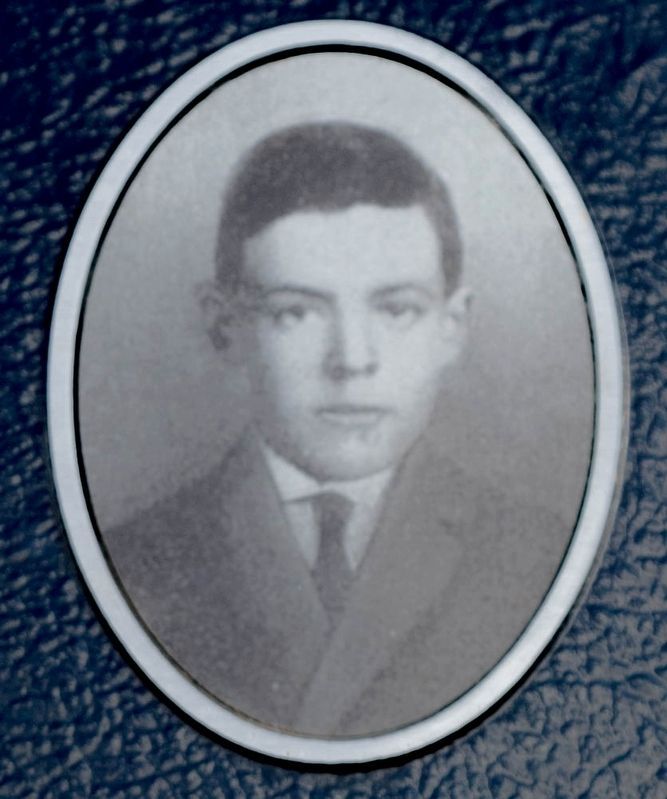 The Sheriff’s Neglect Responsible For The Lynching of Detective Carl M. Etherington, Son of Hartwell Etherington, of Willisburg.
Body Brought To Willisburg For Burial.
The dastardly and cowardly lynching of young Etherington at Newark, O, recently calls for the most searching investigation by the authorities. This Ohio town has long been classed as a “tough” place. Law and order has been ignored to an anarchistic degree, and it is to be hoped that the leaders in this atrocious crime will speedily be brought to justice. Following is an account of the affair:

Newark, O., July 9. — Fully 100 people of this town, unmasked, last night aided in the brutal lynching of Carl Etherington, an anti-saloon Detective. A grand jury investigation of the affair has been ordered and the authorities have caused it to be known that such an investigation will be made as soon as the grand jury shall next convene.

Etherington, who was a native of Willisburg, Washington county, Ky., was employed by the State Anti-Saloon League as a blind tiger raider, was lynched last night at 10:35 o’clock after a day of almost continuous rioting. The doors of the Licking county jail were battered down and Etherington was dragged from his cell. He was shot, kicked, and struck on the head with a hammer before the street was reached, and the finish followed quickly. He was only seventeen years of age.

Etherington early in the evening confessed he killed Wilham Howard, proprietor of the “Last Chance” restaurant and former chief of police, in a raid of alleged “speak oasis,” in a raiding scuffle at 1:30 o’clock yesterday afternoon, and narrowly escaped lynching at that time. When news from the hospital passed over the city, at 9 o’clock last night, the fury of the mob took definite form. Large battering rams were directed upon the doors of the jail, and the deputies were powerless. The doors fell after nearly an hour’s attack.

Etherington was dragged through the streets to the courthouse square and hanged to a tree in the courthouse yard. The horrible affair was witnessed by about 5,000 men, women and children.

It is believed that Etherington asked for permission to make a statement to the mob, and as he attempted to speak somebody struck him a vicious blow on top of the head with a hammer, felling him to the ground, and this blow is believed to have killed him.

Adjutant General Weybrecht says Licking county officials, particularly Sheriff William Linke, are responsible for the lynching here of Detective Carl Etherington, the Kentuckian, who shot former police chief Howard in the blind tiger raid. He has so reported to Gov. Harmon. “The lynching could easily have been prevented,” says General Weybrecht. “The established fact that the mob worked at the jail for two hours tells the story of negligence. If troops had been called for when they should have been, the State of Ohio would not now be disgraced.”

Sheriff Linke did not call out the Newark Company of the Ohio Nation Guard, of the Fourth Regiment. Capt. Priest says he was informed that it was not even necessary to have men at the armory in case of emergency.

The Eubanks anti-mob law, passed at the last session of the Legislature, provides the immediate suspension of the sheriff in case he does not protect prisoners in his custody. Suspension is followed by a hearing before the Governor.

The Governor has suspended the mayor, chief of police and the police captain. New officers were appointed and arrests immediately followed.

The remains of Carl Etherington reached here Sunday night at 8:25, and were met at the train by a large crowd most of whom had gathered to pay a last tribute of respect to the dead and to manifest their sympathy for his family. Many had accompanied the youth’s father, Hartwell Etherington, from his home near Willisburg. Amidst the most pathetic surroundings the coffin was opened for the purpose of identification, the grief of the father being tragic as he knelt by the open coffin and recognized in the battered and mutilated contents his son.

The remains were immediately taken to the Etherington home, near Willisburg, where they remained until the next day, when the funeral was held at the Christian Church, Rev. Jesse Grubbs conducting the services. It is estimated that the crowd in attendance numbered between 2,000 and 3,000 people, probably the largest number that ever attended a funeral in this county.