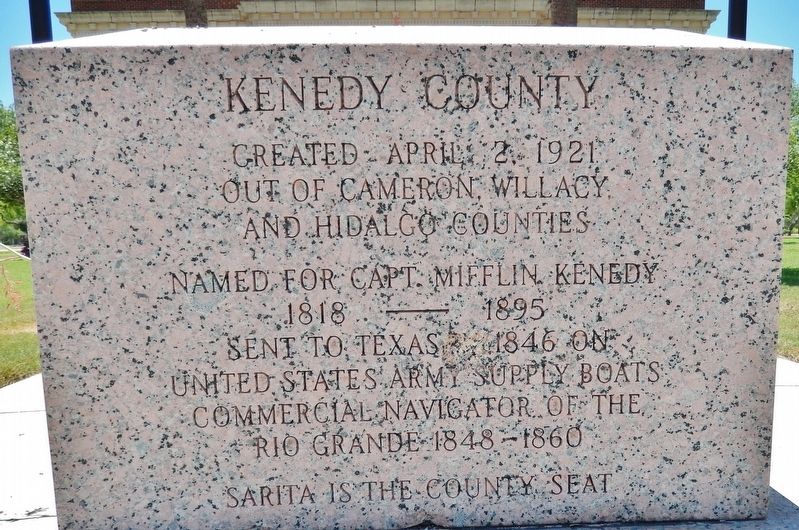 Photographed By Cosmos Mariner, May 17, 2018
1. Kenedy County Marker
Inscription.
Kenedy County. .
Created April 2, 1921 out of Cameron, Willacy and Hildago Counties , Named for Capt. Mifflin Kenedy 1818 , 1895 Sent to Texas 1846 on United States Army supply boats Commercial Navigator of the Rio Grande 1848-1860 , Sarita is the County Seat . . This historical marker was erected in 1936 by Texas Highway Department. It is in Sarita in Kenedy County Texas

Created April 2, 1921
out of Cameron, Willacy
and Hildago Counties

Sarita is the County Seat

Topics and series. This historical marker is listed in this topic list: Government & Politics. In addition, it is included in the Texas 1936 Centennial Markers and Monuments series list. A significant historical date for this entry is April 2, 1921. 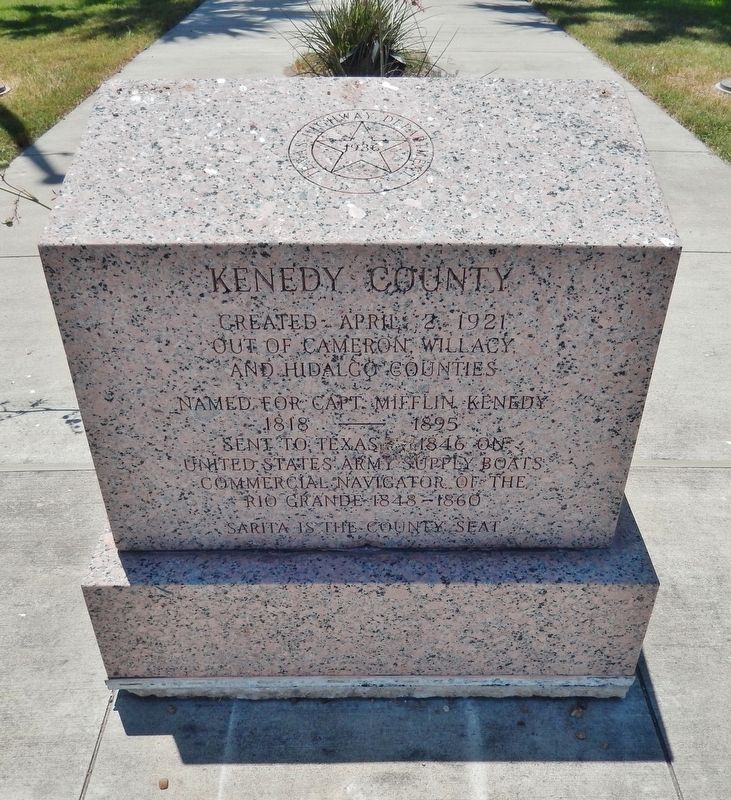 Also see . . .
1. Kenedy County, Texas. Among the oldest artifacts found in the county are stone implements and human remains dating from the Paleo-Indian period (9200 to 6000 B.C.). Though occasional Spanish expeditions crossed the area during the early eighteenth century, the region remained uninhabited by Europeans until the late colonial period. Between the mid-1740s and the early 1750s José de Escandón made several excursions to the lower Rio Grande valley and introduced settlers to the area. (Submitted on May 19, 2018, by Cosmos Mariner of Cape Canaveral, Florida.)

2. Kenedy County, Texas. In 1999, Hurricane Bret struck the county, but damage was minimal because of the low population. The Peñascal Wind Power Project was built near Sarita in the early 21st Century and is expected to slightly raise the population of the area. 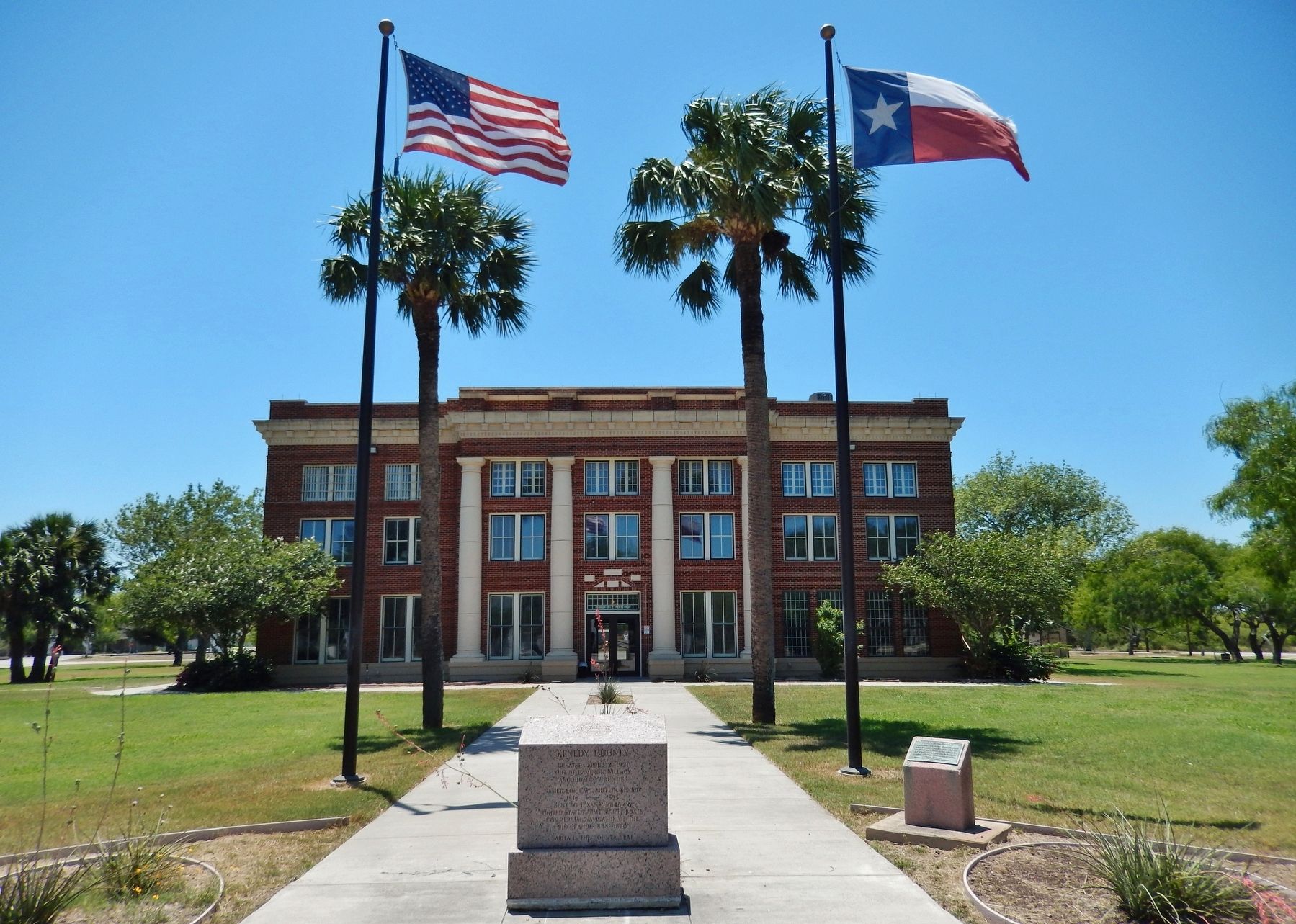 Photographed By Cosmos Mariner, May 17, 2018
3. Kenedy County Marker (wide view; east side of Kenedy County Courthouse in background)
The King Ranch, of which Mifflin Kenedy had been a partner prior to 1868, covers a large part of the county. (Submitted on May 19, 2018, by Cosmos Mariner of Cape Canaveral, Florida.)

3. Mifflin Kenedy. In 1882, Kenedy bought 400,000 acres in Cameron (later Kenedy) County and named it La Parra Ranch after the wild grapevines growing there. He also fenced La Parra, using posts imported from Louisiana. At that same time he organized the Kenedy Pasture Company. Having been successful in steamboating, trading, and ranching, Kenedy in 1876 entered the field of railroad construction to help Uriah Lott build the Corpus Christi, San Diego and Rio Grande line from Corpus Christi to Laredo. (Submitted on May 30, 2018, by Cosmos Mariner of Cape Canaveral, Florida.) 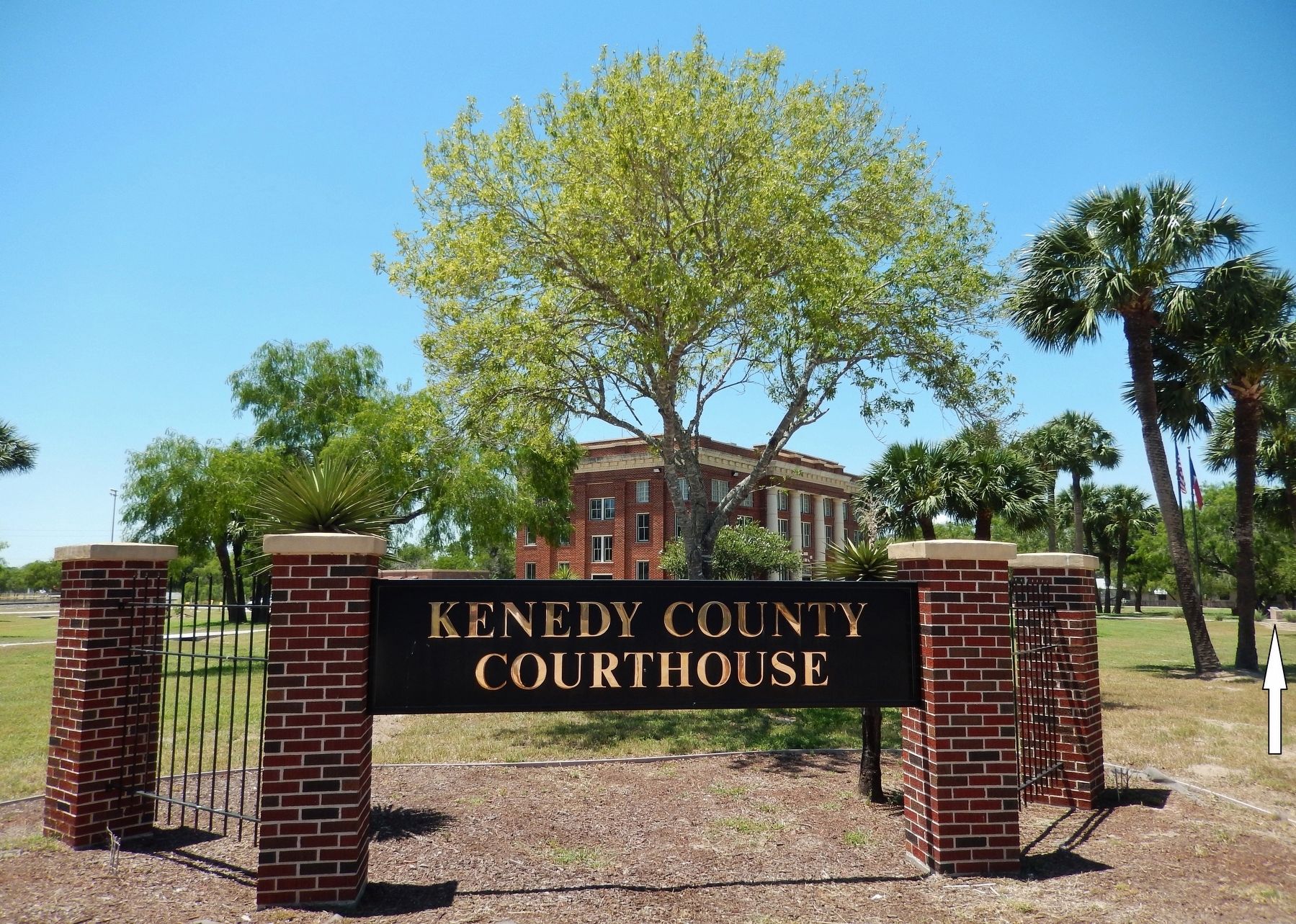