In memory of the women who gave their lives as Army nurses in 1898.

Erected by the Society of Spanish-American War Nurses.

Topics and series. This memorial is listed in these topic lists: Science & Medicine • War, Spanish-American • Women. In addition, it is included in the National Cemeteries series list. 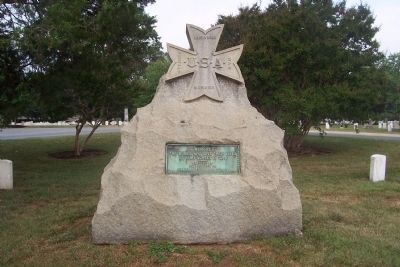 Additional commentary.
1. "Women Were There..."
In 1898 when Teddy went charging up San Juan Hill, after the Battleship Maine blew up in Havana Harbor, sanitary conditions for the wounded soldiers were deplorable. There were typhoid fever epidemics in the camps and few qualified medical personnel. Congress quickly authorized the U.S. Army to procure female nurses but not with military status. They were hired as civilians under contract and over one thousand women were recruited to serve - for thirty dollars a month. From 1898 to 1901 more than 1500 women served in the states, overseas, and on a U.S. Hospital ship. ... 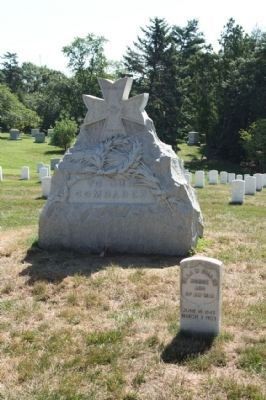 Spanish American War Nurse Clara Maass died as a result of yellow fever. Army Contract Nurse Maass volunteered to participate in an experimental treatment program, after having survived the war. A stamp was issued in her honor in 1976.