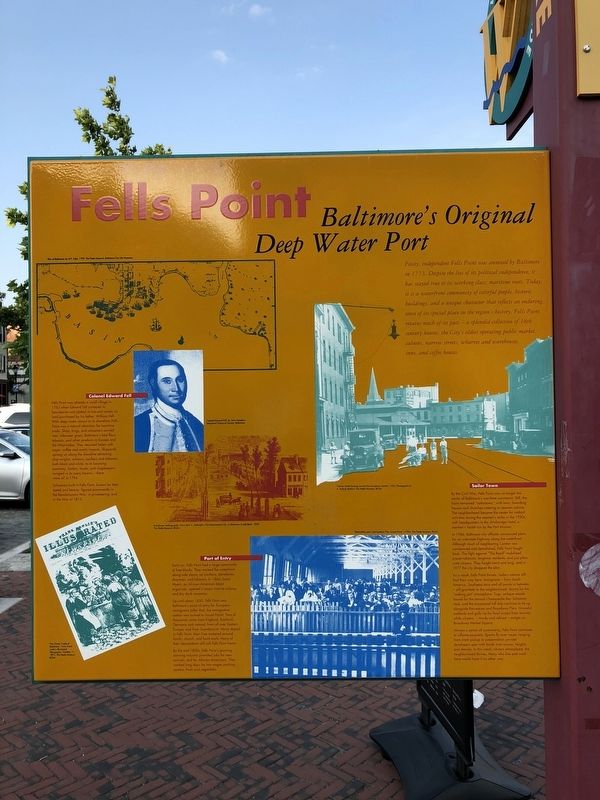 Feisty, independent Fells Point was annexed by Baltimore in 1773. Despite the loss of its political independence, it has stayed true to its working class, maritime roots. Today, it is a waterfront community of colorful people, historic buildings, and a unique character that reflects an enduring sense of its special place in the region's history. Fells Point retains much of its past — a splendid collection of 18th century houses, the City's oldest operating public market, saloons, narrow streets, wharves and warehouses, inns, and coffee houses.

Colonel Edward Fell
Fells Point was already a small village in 1763 when Edward Fell surveyed its boundaries and plotted its lots and streets on land purchased by his father, William Fell. With deep water almost to its shoreline, Fells Point was a natural attraction for maritime trade. Ships, brigs, and schooners carried iron, tidewater grain, Baltimore's best flour, tobacco, and other products to Europe and the West Indies. They returned laden with sugar, 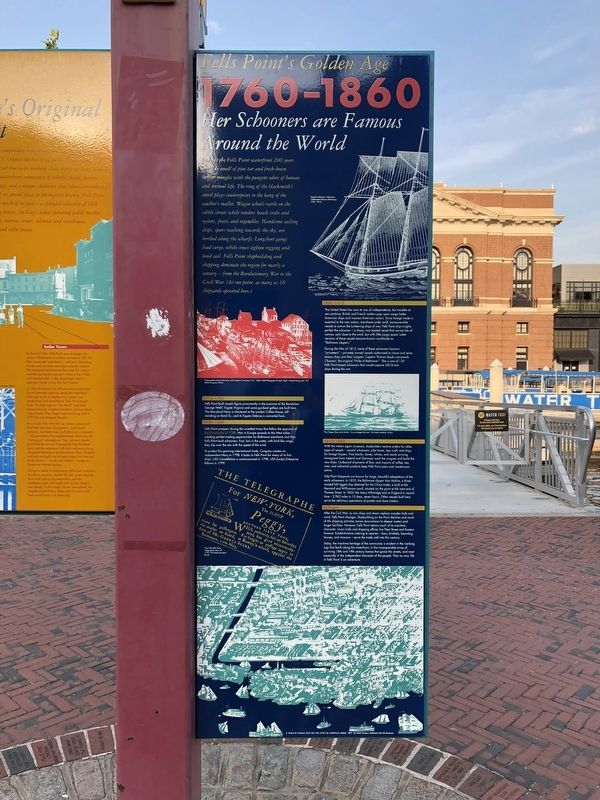 By Devry Jones, June 7, 2018
2. Fells Point Marker
coffee and exotic imports. Shipyards sprang up along the shoreline attracting ship-wrights, artisans, caulkers and laborers, both black and white, to its booming economy. Sailors, locals, and shopkeepers mingled in its many taverns — there were 47 in 1796.

Schooners built in Fells Point, known for their speed and beauty, figured prominently in the Revolutionary War, in privateering, and in the War of 1812.

Port of Entry
Early on, Fells Point had a large community of free blacks. They worked the waterfront along side slaves, as caulkers, stevedores, draymen, and laborers. In 1866, Isaac Myers, an African-American labor organizer, opened a marine railway and dry dock company.

Up until about 1850, Fells Point was Baltimore's point of entry for European immigrants (after that, the immigration station was moved to Locust Point). Tens of thousands came from England, Scotland, Germany and Ireland, from all over Eastern Europe, and from Scandinavia. Many stayed in Fells Point, their lives centered around family, church, and hard work. Many of their descendants still call Fells Point home.

Sailor Town
By the Civil 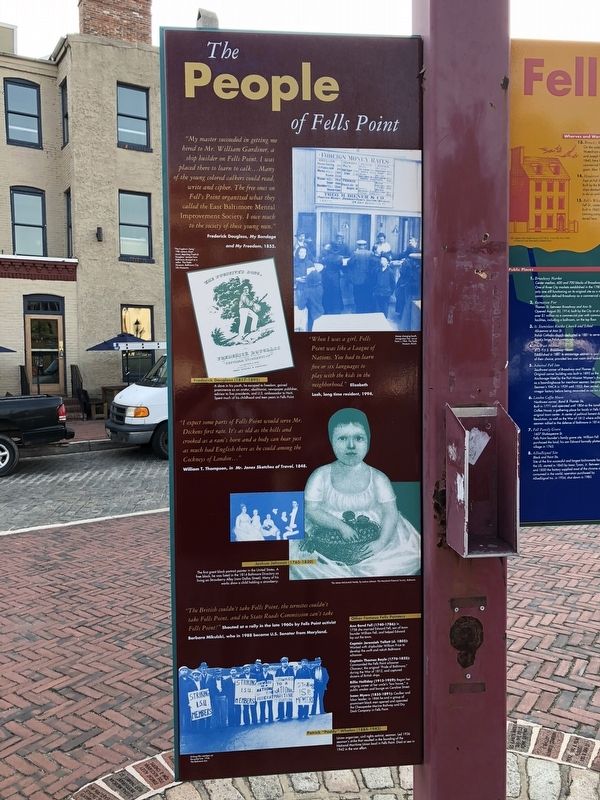 By Devry Jones, June 7, 2018
3. Fells Point Marker
War, Fells Point was no longer the center of Baltimore's maritime commerce. Still, the Point remained "sailortown," with bars, boarding houses and churches catering to seamen ashore. The neighborhood became the center for radical activities during the seamen's strike in the 1930s, with headquarters in the Anchorage Hotel, a seamen's hostel run by the Port Mission.

In 1966, Baltimore city officials announced plans for an interstate highway along the waterfront. Although much of neighboring Canton was condemned and demolished, Fells Point fought back. The fight against "The Road" mobilized preservationists, longtime residents, and just plain irate citizens. They fought hard and long, and in 1977 the city dropped the plan.

As a result, Fells Point thrives. Sailors ashore still find their way here. Immigrants — from South America, Southeast Asia and all points in between — still gravitate to the neighborhood, drawn by the "melting pot" atmosphere. Tugs, antique vessels bound for the annual Chesapeake Bay Schooner race, and the occasional toll ship continue to tie up alongside Recreation and Broadway Piers. Graceful mallards and gulls vie for food scraps from tourists, while citizens — rowdy and refined — mingle on Broadway Market Square. 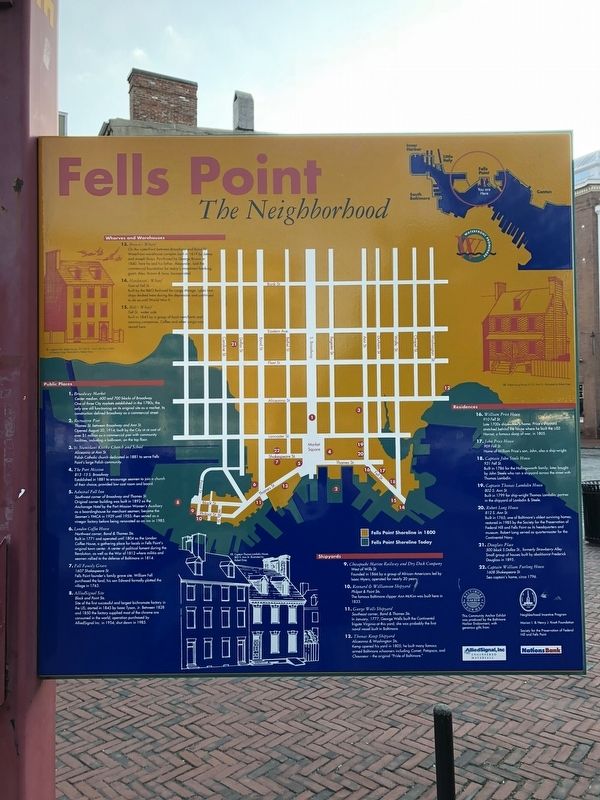 By Devry Jones, June 7, 2018
4. Fells Point Marker
fly over issues ranging from trash pickup to preservation, private developers spar with locals over access, heights, and density. In this vocal, vibrant atmosphere, the neighborhood thrives. Many who live and work here would have it no other way.

[West-facing, right side:]
Fells Point's Golden Age
1760-1860
Her Schooners are Famous Around the World

Imagine the Fells Point waterfront 200 years ago. The smell of pine tar and fresh-hewn lumber mingles with the pungent odors of human and animal life. The ring of the blacksmiths' anvil plays counterpoint to the bang of the caulker's mallet. Wagon wheels rattle on the cobble streets while vendors hawk crabs and oysters, fruits and vegetables. Handsome sailing ships, spars reaching towards the sky, are berthed along the wharfs. longshore gangs load cargo, while crews tighten rigging and bend sail. Fells Point shipbuilding and shipping dominate the region for nearly a century — from the Revolutionary War to the Civil War. (At one point, as many as 18 shipyards operated here.)

1775-1783
Fells Point-built vessels figure prominently in the outcome of the Revolution. George Wells' frigate Virginia and some gunboat galleys are built here. The Maryland Navy is chartered at the London Coffee House, still standing on Bond St., and its frigate 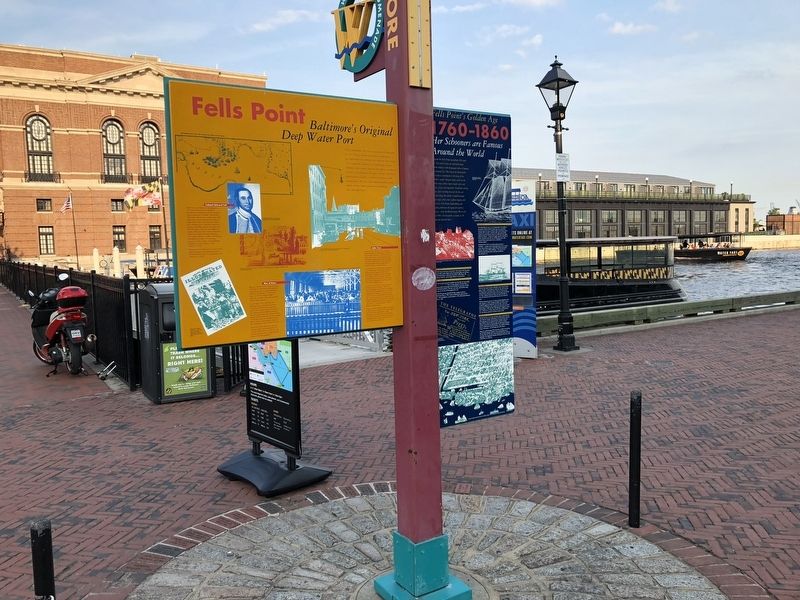 1789-1800
Fells Point prospers during the unsettled times that follow the approval of the Constitution in 1789. War in Europe spreads to the West Indies creating perfect trading opportunities for Baltimore merchants and their Fells Point-built schooners. Fast, low in the water, with bird-like wings, they slip over the sea with the speed of the wind.

To protect this growing international trade, Congress creates an independent Navy in 1798. It looks to Fells Point for many of its first ships: USS Constellation is commissioned in 1798; USS (Lucky) Enterprise follows in 1799.

1800-1815
The United States has won its war of independence, but troubles at sea continue. British and French raiders prey upon cargo-laden American shops and impress American sailors. Since foreign trade is essential to the new nation, merchants order swift, maneuverable vessels to outrun the lumbering ships of war. Fells Point ship-wrights perfect the schooner — a sharp, two-masted vessel that carries lots of canvas, sails close to the wind, but with little cargo space. Latter versions of these vessels become known worldwide as "Baltimore clippers."

During the War of 1812, some of these schooners become "privateers" — privately owned vessels authorized to chase and seize enemy ships 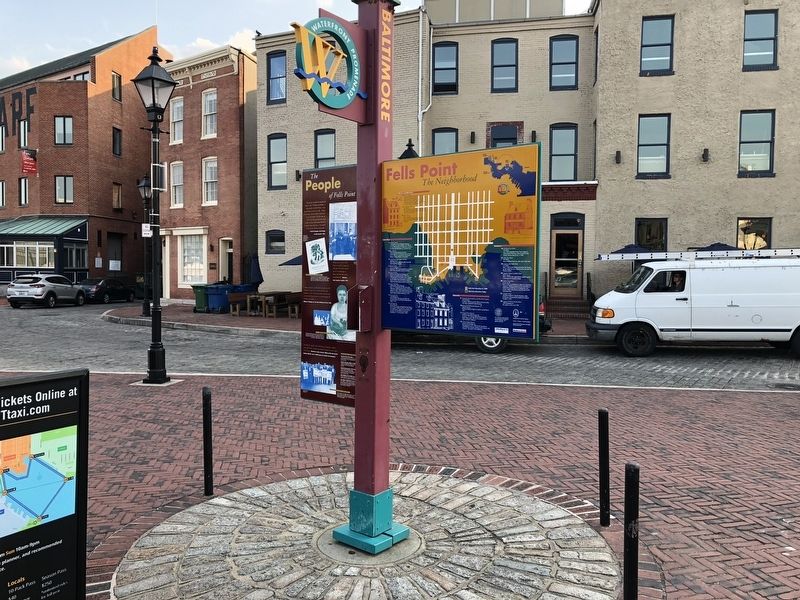 By Devry Jones, June 7, 2018
6. Fells Point Marker
and their cargoes. Captain Thomas Boyle commands Chasseur, the original "Pride of Baltimore." She is one of 130 Fells Point-based schooners that would capture 550 British ships during the war.

Fells Point shipyards are known for large, beautiful adaptations of the early schooners. IN 1833, the Baltimore clipper Ann McKim, a three-masted full-rigged ship destined for the China trade, is built at the Kennard and Williamson yard, situated on the point at the west end of Thames Street. In 1855, the Mary Whitridge sails to England in record time — 2,962 miles in 12 days, seven hours. Other vessels built here serve the nefarious operations of pirates and slave traders.

Epilogue
After the civil War, as iron ships and steam replace wooden hulls and wind, Fells Point changes. Shipbuilding on the Point declines and much of the shipping activities moves downstream to deeper waters 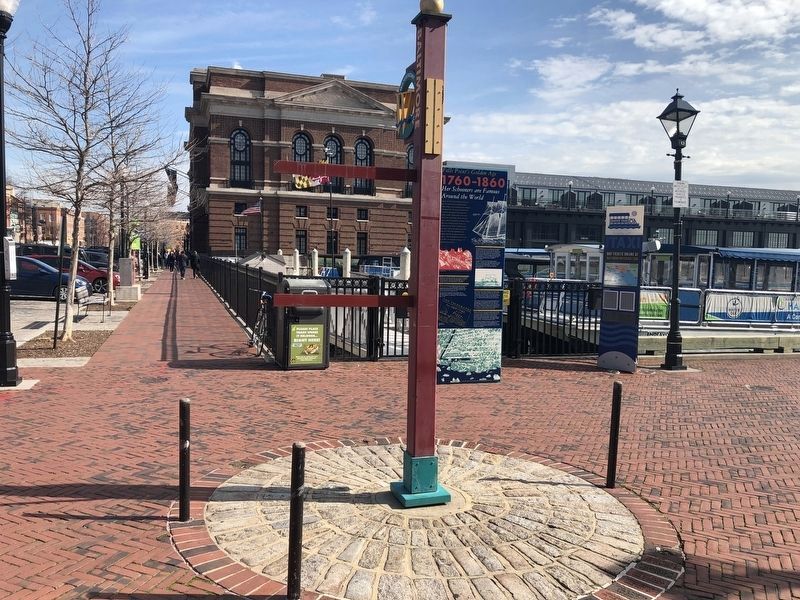 By Devry Becker Jones, February 16, 2020
7. Fells Point Marker
The marker has is partially missing or removed.
and larger facilities. However, Fells Point retains much of its maritime character. Union halls and shipping offices line Fleet Street and Eastern Avenue. Establishments catering to seamen — bars, brothels, boarding houses, and missions — serve the trade well into this century.

Today, the maritime heritage of the community is evident in the working tugs that berth along the waterfront, in the incomparable array of surviving 18th and 19th century homes that grace the streets, and most especially in the independent character of the people. Then as now, life in Fells Point is an adventure.

[East-facing, left side:]
The People of Fells Point

"My master succeeded in getting me hired to Mr. William Gardiner, a ship builder on Fells Point. I was placed there to learn to calk... Many of the young colored calkers could read, write and cipher. The free ones on Fell's Point organized what they called the East Baltimore Mental Improvement Society. I owe much to the society of these young men."
Frederick Douglass, My Bondage and My Freedom, 1855.

Frederick Douglass (1817-1895)
A slave in his youth, he escaped to freedom, gained prominence as an orator, abolitionist, newspaper publisher, advisor to five presidents, and U.S. ambassador to Haiti. Spent much of his childhood and teen years in Fells Point.

"When I was a girl, Fells Point was like a League of Nations. You had to learn five or six languages to play with the kids in the neighborhood."
Elizabeth Losh, long time resident, 1994.

"I expect some parts of Fells Point would serve Mr. Dickens first rate. Its as old as the hills and crooked as a ram's horn and a body can hear just as much bad English there as he could among the Cockneys of London..."
William T. Thompson, in Mr. Jones Sketches of Travel, 1848.

Joshua Johnson (1765-1830)
The first great black portrait painter in the United States. A free black, he was listed in the 1814 Baltimore Directory as living on Strawberry Alley (now Dallas Street). Many of his works show a child holding a strawberry.

Captain Thomas Boyle (1776-1825): Commanded the Fells Point schooner Chasseur, the original "Pride of Baltimore," during the War of 1812, and captured dozens of British ships.

Billie Holliday (1915-1959): Began her singing career at her uncle's "low house," a public smoker and lounge on Caroline Street.

Isaac Myers (1835-1891): Caulker and labor leader; in 1866, he and a group of prominent black men opened and operated the Chesapeake Marine Railway and Dry Dock Company in Fells Point.

Public Places
1. Broadway Market
Center median, 600 and 700 blocks of Broadway
one of the three City markets established in the 1780s; the only one still functioning on its original site as a market. Its construction defined Broadway as a commercial street.

2. Recreation Pier
Thames St. between Broadway and Ann St.
Opened August 20, 1914; built by the City at a cost of over $1 million as a commercial peer with community facilities, including a ballroom, on the top floor.

4. The Port Mission
813-15 S. Broadway
Established in 1881 to encourage seamen to join a church of their choice; provided low cost room and board.

5. Admiral Fell Inn
Southwest corner of Broadway and Thomas St.
Original corner building was built in 1892 as the Anchorage Hotel by the Port Mission Women's Auxiliary as a boardinghouse for merchant seamen; became the Seamen's YMCA in 1929 until 1955; then served as a vinegar factory before being renovated as an inn in 1985.

6. London Coffee House
Northwest corner, Bond & Thames Sts.
Built in 1771 and operated until 1804 as the London Coffee House, a gathering place for locals in Fells Point's original town center. A center of political foment during the Revolution, as well as the War of 1812 where militia and seamen rallied to the defense of Baltimore in 1814.

8. AlliedSignal Site
Block and Point Sts.
Site of the first successful and largest bichromate factory in the US; started in 1845 by Isaac Tyson, Jr. Between 1828 and 1850 the factory supplied most of the chrome are consumed in the world; operation purchased by AlliedSignal Inc. in 1954; shut down in 1985.

Wharves and Warehouses
13. Brown's Wharf
On the waterfront between Broadway and Bond St.
Waterfront warehouse complex built in 1819 by James and Joseph Biays. Purchased by George Brown in 1840; here he and his father, Alexander, laid the commercial foundation for today's investment banking giant, Alex, Brown & Sons, Incorporated.

14. Henderson's Wharf
Foot of Fell St.
Built by the B&O Railroad for cargo storage. Lyles Line ships docked here during the depression and continued to do so until World War II.

15. Belt's Wharf
Fell St., water side
Built in 1845 by a group of local merchants and canning companies. Coffee and other cargo was stored here.

18. Captain John Steele House
931 Fell St.
Built in 1786 for the Hollingsworth family; later bought by John Steele who ran a shipyard across the street with Thomas Lambdin.

20. Robert Long House
812 S. Ann St.
Built in 1765; one of Baltimore's oldest surviving homes; restored in 1985 by the Society for the Preservation of Federal Hill and Fells Point as its headquarters and museum. Robert Long served as quartermaster for the Continental Navy.