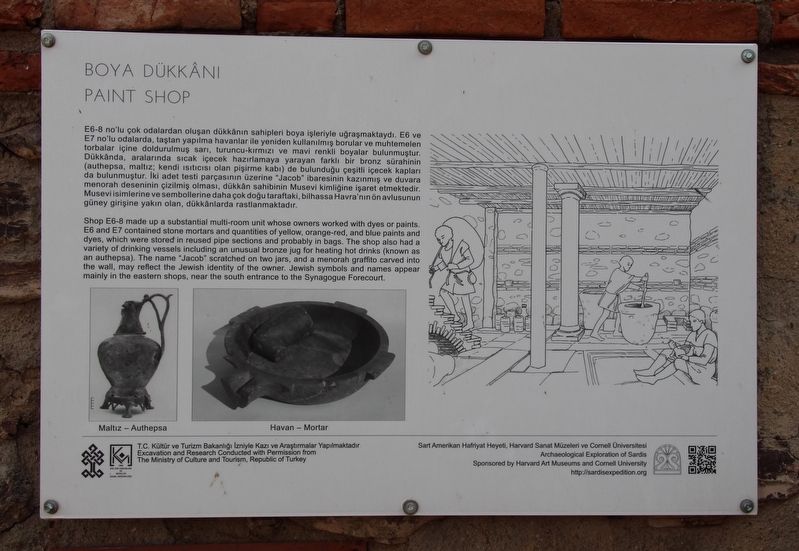 Shop E6-8 made up a substantial multi-room unit whose owners worked with dyes or paints. E6 and E7 contained stone mortars and quantities of yellow, orange-red, and blue paints and dyes, which were stored in reused pipe sections and probably in bags. The shop also had a variety of drinking vessels including an unusual 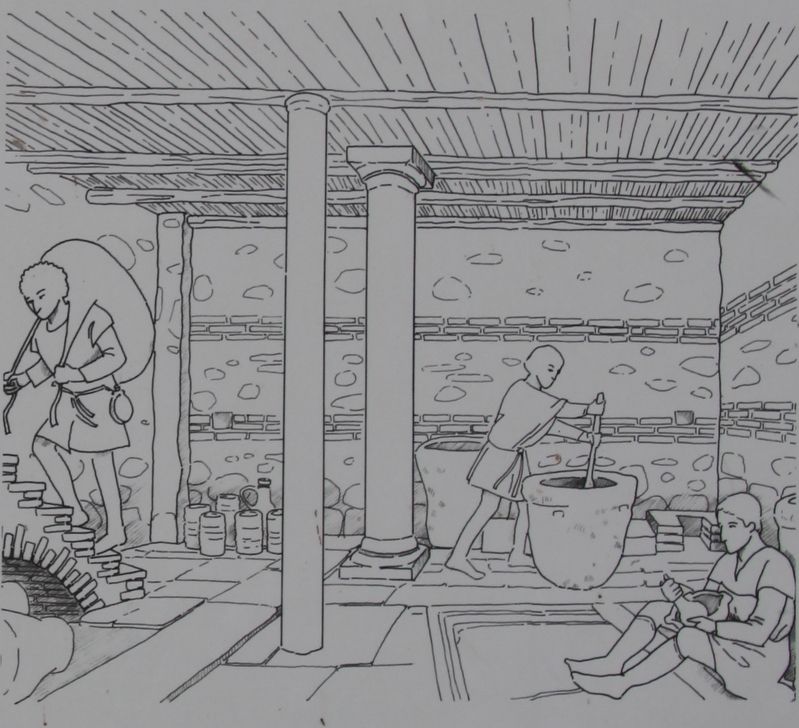 By Dale K. Benington, June 16, 2018
2. (Jacob's) Paint Shop Marker
A close up view of the supposed paint shop scene, that is displayed on this marker.
bronze jug for heating hot drinks (known as an authepsa). The name "Jacob” scratched on two jars, and a menorah graffito carved into the wall, may reflect the Jewish identity of the owner. Jewish symbols and names appear mainly in the eastern shops, near the south entrance to the Synagogue Forecourt.

Erected by The Ministry of Culture and Tourism, Republic of Turkey, and the Harvard Art Museums and Cornell University.

Location. 38° 29.289′ N, 28° 2.399′ E. Marker is near Sart, Manisa, in Salihli (district). Marker can be reached from Kenan Evren Cd. just east of Sart Yolu, on the left when traveling east. This marker is on the grounds of the Sardis Archaeological Park, near the Roman Bath-Gymnasium and Synagogue, amongst the "Byzantine Shop" ruins that line the Roman Avenue, just outside the south wall of the Synagogue. Touch for map. Marker is in this post office area: Sart, Manisa 45370, Turkey. Touch for directions. 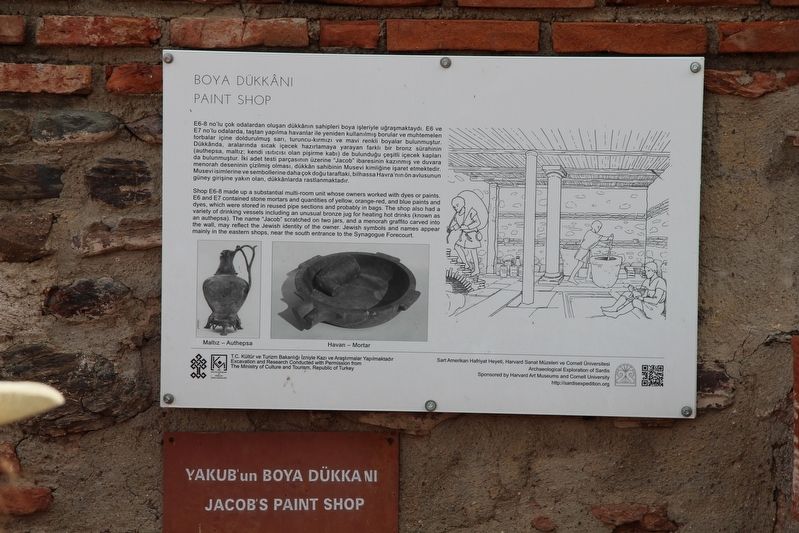 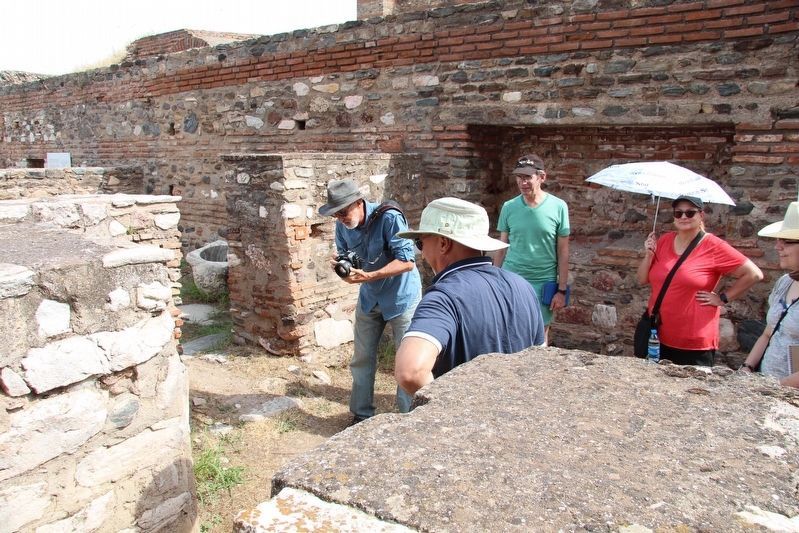 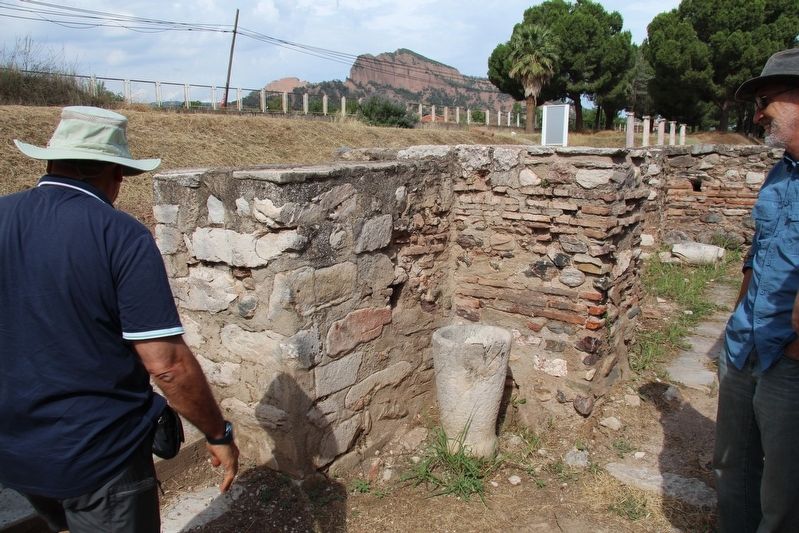 By Dale K. Benington, June 16, 2018
5. (Yakub'un) Boya Dükkáni / (Jacob's) Paint Shop
View of Dr. Fairchild discussing and looking towards the documented existing etching of a menorah, that is located on the stonework, at the entrance to Jacob's Paint Shop. 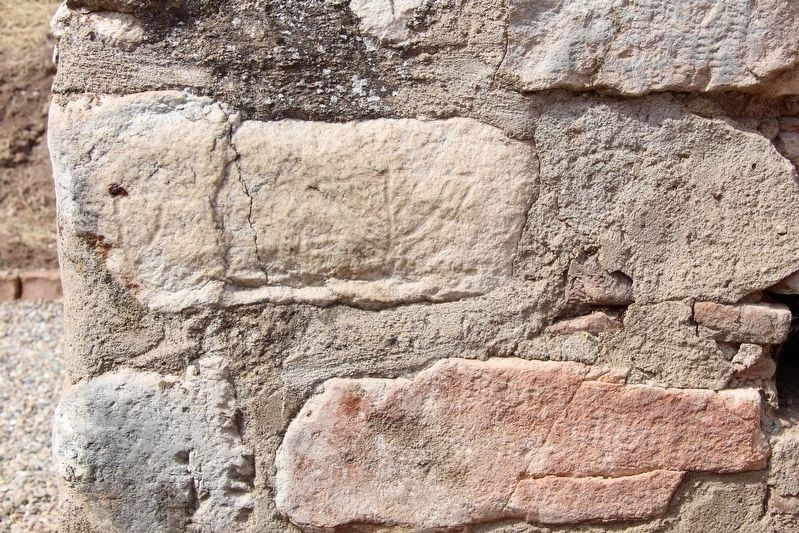