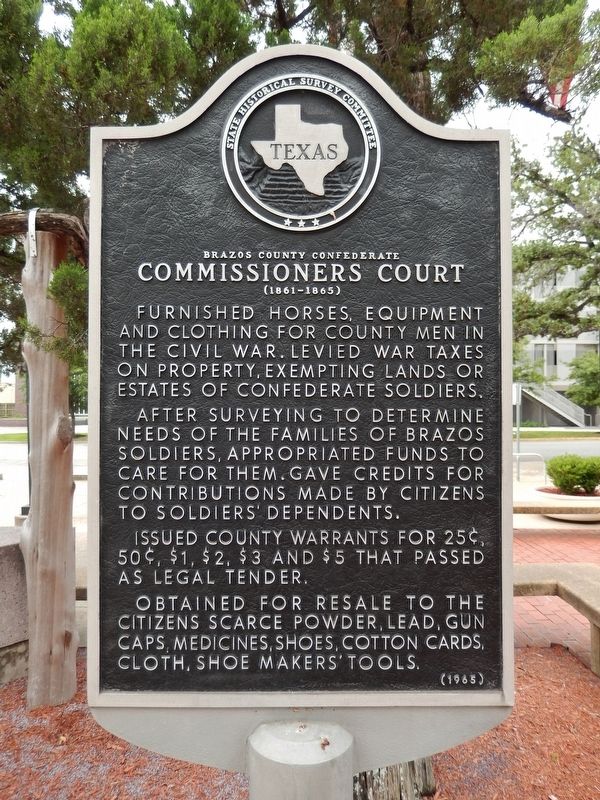 By Cosmos Mariner, May 26, 2014
1. Brazos County Confederate Commissioners Court Marker
Inscription.
Brazos County Confederate Commissioners Court. . Furnished horses, equipment and clothing for county men in the Civil War. Levied war taxes on property, exempting lands or estates of Confederate soldiers. . . After surveying to determine needs of the families of Brazos soldiers, appropriated funds to care for them. Gave credits for contributions made by citizens to soldiers' dependents. . . Issued county warrants for 25 (cents), 50 (cents), $1, $2, $3 and $5 that passed as legal tender. . . Obtained for resale to the citizens scarce powder, lead, gun caps, medicines, shoes, cotton cards, cloth, shoe makers' tools. . This historical marker was erected in 1965 by State Historical Survey Committee. It is in Bryan in Brazos County Texas

After surveying to determine needs of the families of Brazos soldiers, appropriated funds to care for them. Gave credits for contributions made by citizens to soldiers' dependents.

Location. 30° 40.421′ N, 96° 22.248′ W. Marker is in Bryan, Texas, in Brazos County. Marker can be reached from the intersection of East 26th Street and North Washington Avenue, on the right when traveling west. Marker is located in small plaza near Brazos County Courthouse main entrance. Touch for map. Marker is at or near this postal address: 300 East 26th Street, Bryan TX 77803, United States of America. Touch for directions. 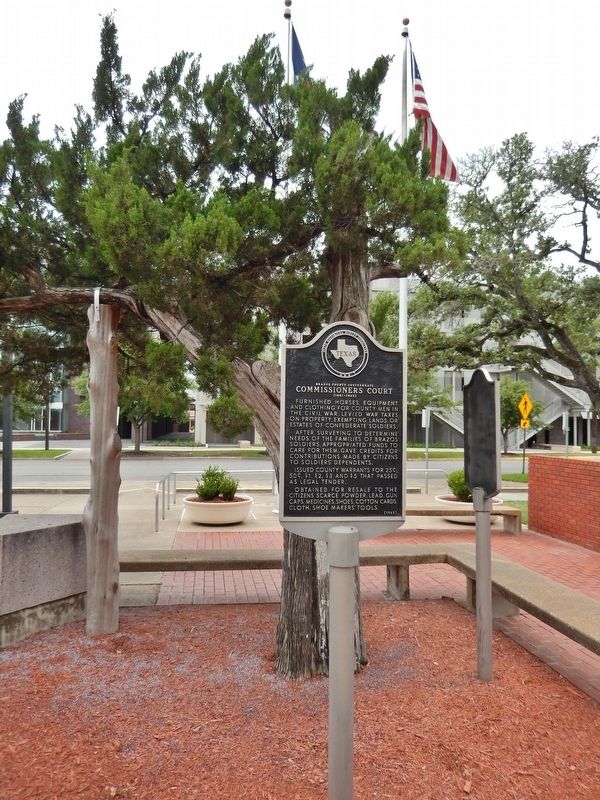 Also see . . .  Brazos County Commissioners Court.
On the eve of the Civil War, Brazos County had a mixed economy of small farms and a few larger plantations, with a population of 1,713 whites and 1,063 slaves. Of the 118 slaveholders in the county, seventy-seven owned fewer than five slaves, and only four owned more than fifty. The county voted 215 to 44 for secession in 1861 and mobilized its inhabitants for the war. The railhead at Millican became an important transportation center for the Confederate war effort, and a training camp was established nearby in 1861. Local men formed companies or parts of companies in the Twenty-first and Twenty-fifth Texas Cavalry regiments, the Tenth Texas Infantry regiment, and other army units, and participated in various home and state guard units. During the war the Brazos County Commissioners Court acted to gather supplies for the Confederacy and assist the indigent families of men serving in the armed forces. (Submitted on December 7, 2017, by Cosmos Mariner of Cape Canaveral, Florida.)