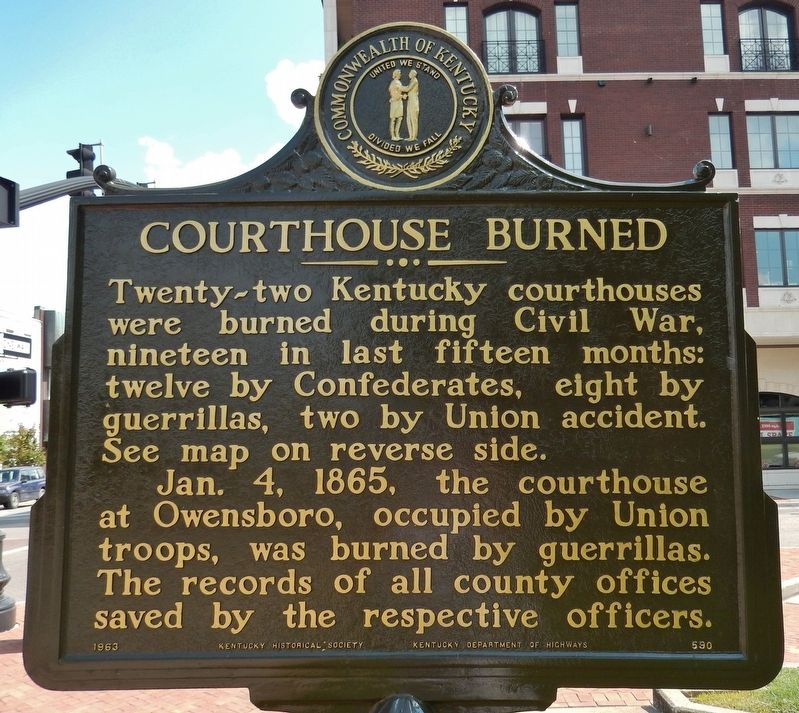 By Cosmos Mariner, September 17, 2017
1. Courthouse Burned Marker
Inscription.
Courthouse Burned. . Twenty-two Kentucky courthouses were burned during Civil War, nineteen in last fifteen months: twelve by Confederates, eight by guerrillas, two by Union accident. See map on reverse side. . . Jan. 4, 1865, the courthouse at Owensboro, occupied by Union troops, was burned by guerrillas. The records of all county offices saved by the respective officers. . This historical marker was erected in 1963 by Kentucky Historical Society & Kentucky Department of Highways. It is in Owensboro in Daviess County Kentucky

Jan. 4, 1865, the courthouse at Owensboro, occupied by Union troops, was burned by guerrillas. The records of all county offices saved by the respective officers.

Other nearby markers. At least 8 other markers are within 9 miles of this marker, measured as the crow flies. Daviess Countians Who Served (here, next to this marker); Daviess Co. U.S. Colored Troops in the Civil War 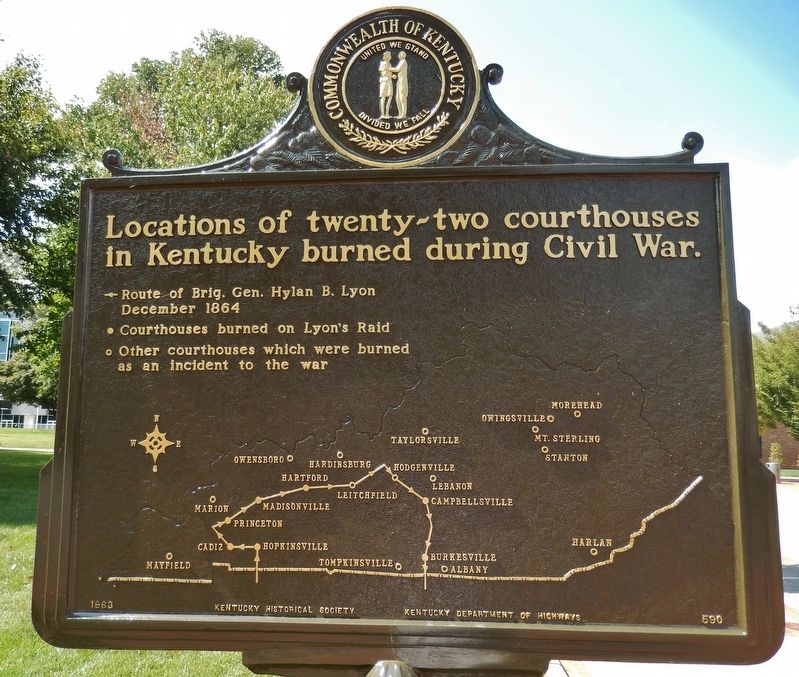 By Cosmos Mariner, September 17, 2017
2. Courthouse Burned Marker (side 2; map of Kentucky Courthouses burned during the Civil War)
The twenty-two Kentucky courthouses burned during the civil war were located at: Mayfield, Cadiz, Marion, Princeton, Hopkinsville, Madisonville, Owensboro, Hartford, Hardinsburg, Leitchfield, Tompkinsville, Hodgenville, Taylorsville, Lebanon, Campbellsville, Burkesville, Albany, Harlan, Stanton, Mt. Sterling, Owingsville and Morehead.
(within shouting distance of this marker); Medal of Honor Winners (within shouting distance of this marker); Wendell H. Ford (about 300 feet away, measured in a direct line); George Graham Vest / "Tribute to a Dog" (about 300 feet away); Confederate Congressional Medal of Honor (about 400 feet away); Vietnam Honor Roll (approx. 8 miles away in Indiana); Abraham Lincoln (approx. 8.1 miles away in Indiana). Touch for a list and map of all markers in Owensboro.

Also see . . .
1. William Davison, a Confederate guerrilla. Hawesville was the birthplace of William Davison, a Confederate guerrilla captain and son of Dr. Hardin Davison. Davison's band of marauders terrorized civilians in the river counties of western Kentucky in 1864. Davison died in 1865 from wounds suffered while he was burning the Owensboro-Daviess County Courthouse. He was buried in a shallow grave in southern Hancock County and was moved to the Hawesville Cemetery after the war. (Submitted on July 6, 2018, by Cosmos Mariner of Cape Canaveral, Florida.) 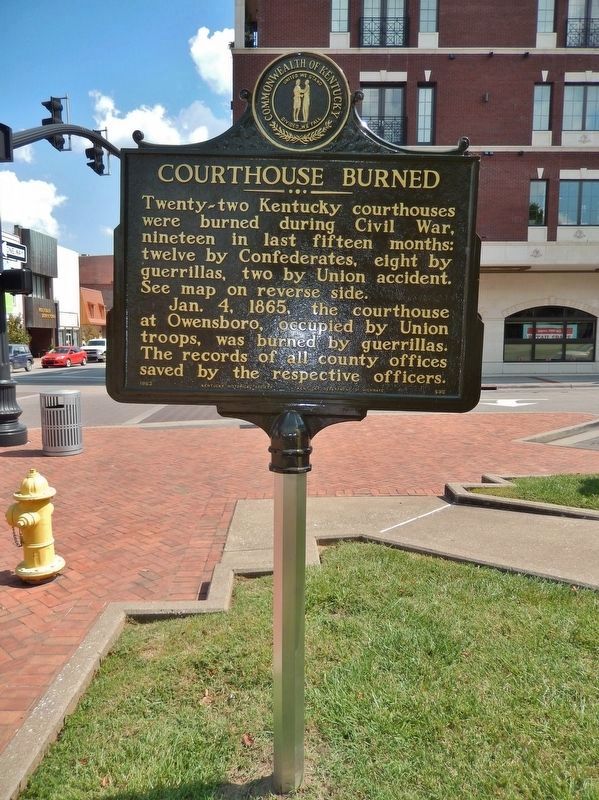 By Cosmos Mariner, September 17, 2017
3. Courthouse Burned Marker (side 1; tall view; looking east along West 2nd Street)
Regiment, William “Bill” Davison resigned after the Emancipation Proclamation was issued and became a Confederate guerrilla. Davison then traveled to Hancock and Daviess counties to assemble a group of guerrillas called “Davison’s Hyenas.” Davison had orders to burn every courthouse that was occupied by the United States Colored Troops (USCT). As the Daviess County courthouse was used to quarter three companies of USCT troops, Davison set his sights on this building. (Submitted on July 7, 2018, by Cosmos Mariner of Cape Canaveral, Florida.) 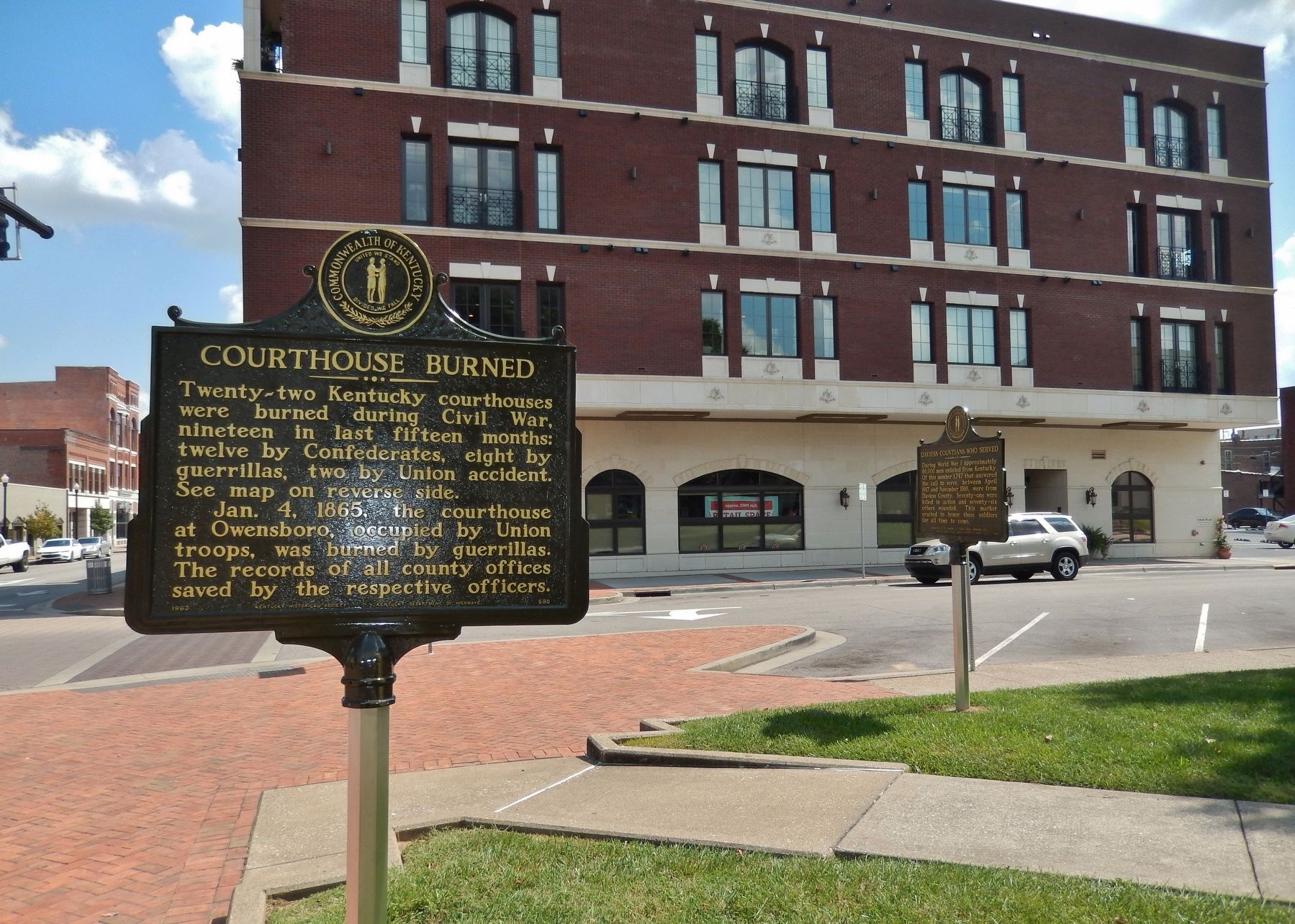 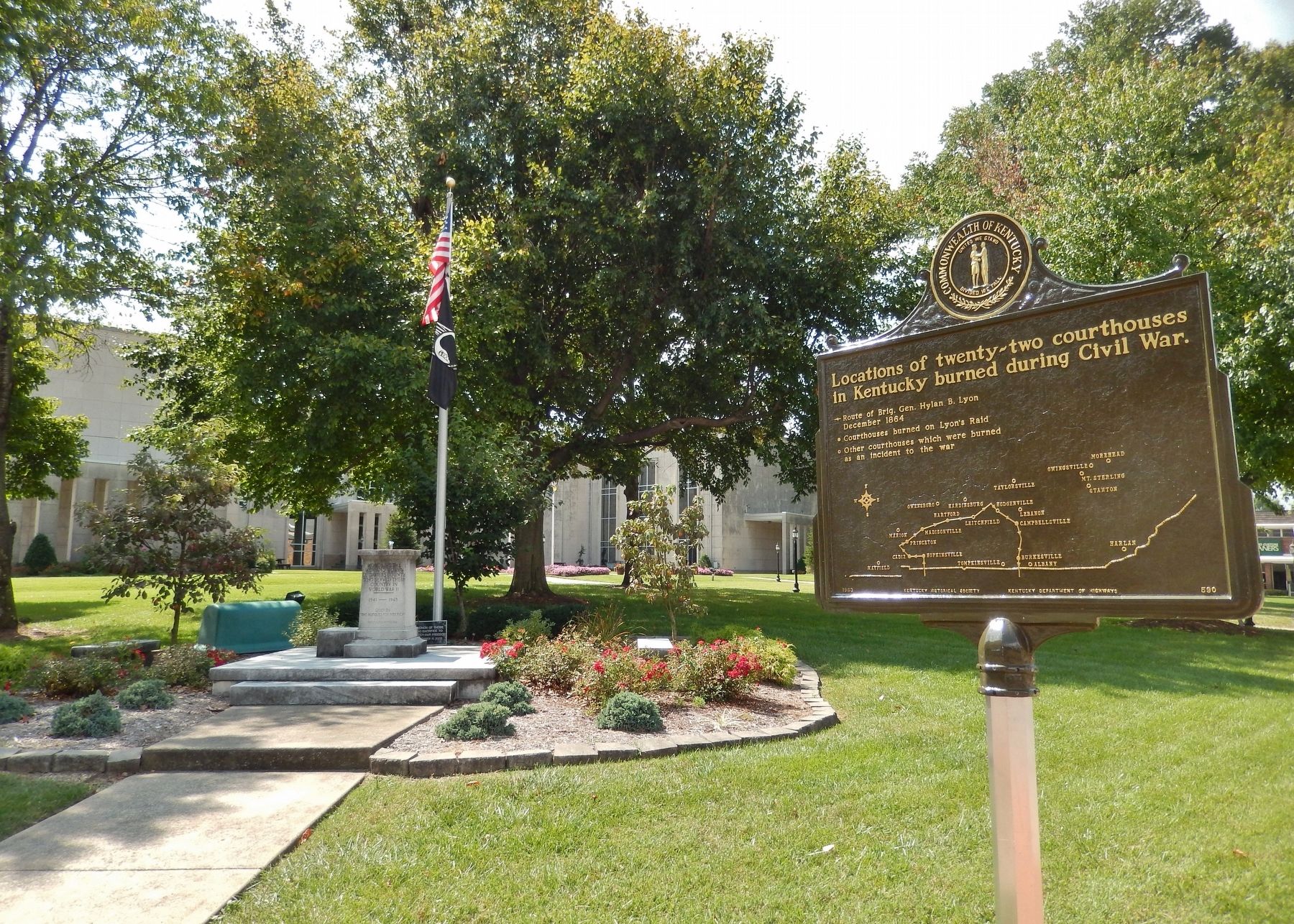