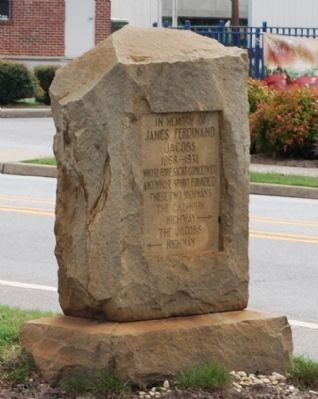 Topics. This historical marker is listed in this topic list: Roads & Vehicles. A significant historical year for this entry is 1868.

Location. 34° 27.55′ N, 81° 52.683′ W. Marker is in Clinton, South Carolina, in Laurens County. Marker is on Jacobs Highway, on the left when traveling south. Marker is located at the intersection of SC Highways 56 (Jacob's Highway) and 72 (Calhoun Highway). Touch for map. Marker is in this post office area: Clinton SC 29325, United States of America. Touch for directions. 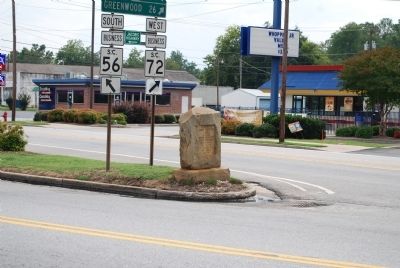 Photographed By Brian Scott, September 27, 2008
2. James Ferdinand Jacobs Marker
The marker is best viewed from the sidewalk. I would not recommend trying to view it upclose due to the traffic on the two highways.

Click or scan to see
this page online
Malcolm A. MacDonald (approx. 0.6 miles away); William Plumer Jacobs, D.D., LL.D. (approx. 0.7 miles away); Eugene Blakely Sloan (approx. 0.8 miles away); Henry Clinton Young (approx. one mile away). Touch for a list and map of all markers in Clinton. 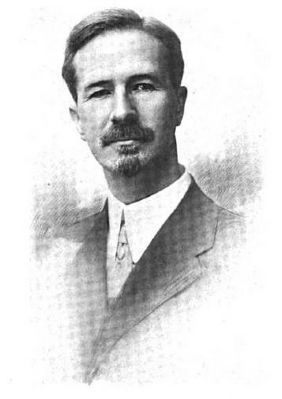 History of South Carolina, Vol 3 by Yates Snowden
3. James Ferdinand Jacobs
(1868-1931)
In addition to his printing enterprises. Jacobs was responsible for naming Maxwell House Coffee and its slogan: Good to the Last Drop.
He received his A. B. degree in 1888, and studied theology in the Princeton Theological Seminary and Columbia Theological Seminary, completing his three years' course in the spring of 1891.

In that year he married Miss Mary Elliott Duckett, of Clinton. Their three sons are William Plumer, James Ferdinand and Thomas Dillard Jacobs. On completing his theological studies Mr. Jacobs was elected as professor of Biblical Literature and Philosophy in the Presbyterian College of South Carolina, and also financial agent of that institution. Those duties made up his work for seven years.

The great business of which he is now the head is the result of his long experience in religious publication work. On leaving his chair in the Presbyterian College he leased the Southern Presbyterian, the organ of the Southern Presbyterian Church in the southeast. He was its editor and publisher seven years, and three years after taking charge he bought the paper and after increasing its circulation 300% finally sold the publication to Dr. Thomas B. Converse of Louisville, who moved it to Atlanta. In the meantime Mr. Jacobs developed what was known at first as the South Carolina Religious Press Advertising Syndicate, later the Religious Press Advertising Syndicate, and still later Jacobs & Company, the present title of the business. With an increasing clientele as advertising managers for standard religious weeklies of white denomination in the South and lower Middle West, this became the largest special advertising agency in America, and the only important religious press advertising agency. The advertising management of about three-fourths of the standard religious weeklies of white denominations in the above area are vested in the unexcelled facilities and resources of Jacobs & Company.

The members of the firm besides Mr. Jacobs include his sister-in-law, Miss C. E. Duckett, and his three sons above named. The business has a much larger scope than the ordinary advertising agency. It has developed the technical facilities for service, including departments of commercial art, photo-engraving, electrotyping, nickeltyping and fine printing, including color printing. These graphic arts departments represent the only such combination with an advertising business to be found anywhere in the United States.

It is the distinction of the business that it maintains offices in New York, Chicago and St. Louis as well as in many of the leading southern cities. All the general clerical as well as the manufacturing and graphic arts work is done in the home office at Clinton. The firm occupies its own fireproof office building with 30,000 square feet of floor space. Mr. Jacobs' firm initiated the idea of measuring advertising prices in ratio to circulation, also measuring quality of circulation by the ratio of the net circulation income of a publication to its theoretical circulation income.- The first principle is now firmly established in American advertising methods.

The system and service furnished by this firm have been the means of saving many religious publications from extinction and have given others the needed resources for increased development. The company has also maintained the strictest ideals for the religious press, and those in close touch with the financial conditions affecting the religious press regard Jacobs and Company as one of the chief bulwarks of these institutions.