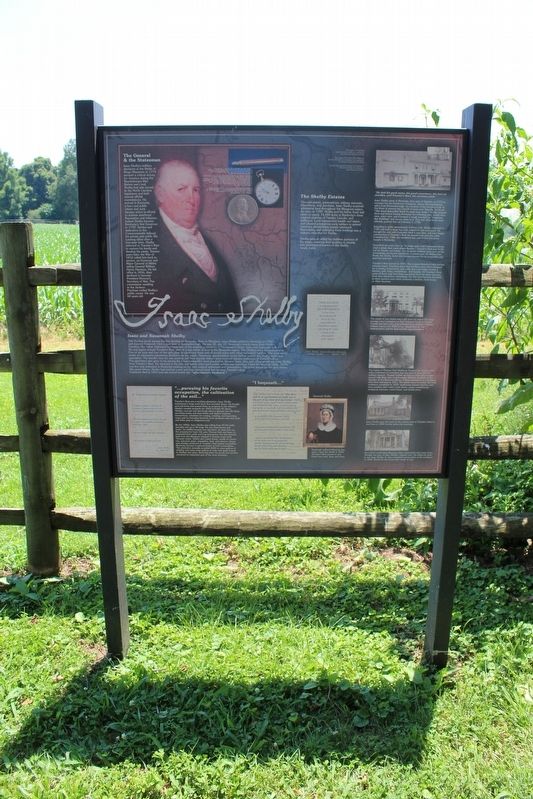 The General and Statesman
Isaac Shelby’s military decisions at the Battle of King’s Mountain in 1779 secured a critical victory for America during the Revolutionary War. Before war’s end, Shelby had also served in the North Carolina legislature and held several official commissions. He arrived in Kentucky a hero and soon became active in efforts to achieve statehood. Reputation and influence helped Shelby become Kentucky’s first Governor in 1792. Service and dedication to the Commonwealth defined his private and public life. Leaving office after a four-year term, Shelby returned to Traveler’s Rest to nurture his family and develop his estate. Sixteen years later, the War of 1812 called him back to service, as Governor and Major General of Militia aiding General William Henry Harrison. He left office in 1816, then declined to become President Monroe’s Secretary of War. The commission resulting in the Jackson Purchase ended Shelby’s public career. He was 68 years old.

“I bequeath to my son Evan Shelby my Spy Glass.” This gift from Commodore Oliver Hazard Perry was taken from the British flagship 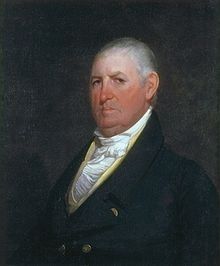 Click or scan to see
this page online
captured during his victory at the Battle of Lake Erie in 1813.

President Monroe appointed Isaac Shelby and Andrew Jackson in 1818 to negotiate the Jackson Purchase, where the Chickasaw Indians ceded their lands west of the Tennessee River with the limits of Kentucky and Tennessee to the United States. Isaac Shelby lost this picket watch while on the mission. Son Thomas Hart Shelby found and later received it as a gift from his father.

“I give and bequeath to my beloved wife Susannah Shelby my Gold Meddal…” Congress presented this Medal of Honor to Isaac Shelby for service during the War of 1812 at the Battle of the Thames.

I thank God that all is now peace and that he has suffered me to live to see Kentucky become of the free, respectable and independent States, and taking her stand as such, in the first councils of the Nation. Isaac Shelby Lincoln County, Kentucky to Adam Cooper April 7, 1821.

Isaac and Susannah Shelby
The Shelby’s stood among the first families of Kentucky. Born in Maryland, Isaac Shelby settled in Kentucky in 1782 and married Susannah Hart a year later at Boonesborough. He was 32, she 19. Susannah’s family came from North Carolina. Her father Nathaniel had been one of the original proprietors of Henderson’s Grant. Isaac and Susannah built a life and legacy around Traveler’s Rest, part 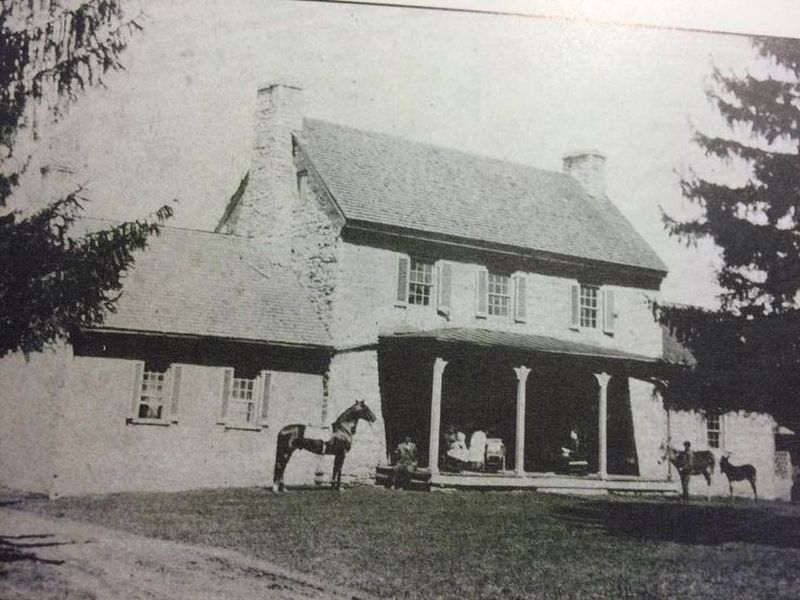 By Tom Bosse
3. Traveler's Rest
of a vast estate of land in the Bluegrass region. The Shelbys were devoted parents. Five of six boys and four of five girls grew to adulthood there and all would marry with other influential families. The sons would reside on substantial plantations dived from the estate. Numerous grandchildren would further extend the Shelby name and reputation. The family’s love for one another and how warmly visitors were received became hallmarks of Traveler’s Rest. The plantation also grew to be among the Commonwealth’s most productive. Several times, duty and office would all Isaac Shelby from Traveler’s Rest. He returned to his wife and family when each public service was complete. Upon his death in 1826, Shelby was the only individual in Kentucky residing on his own original settlement and preemption. His grave stands on the spot where, fifty years before, Shelby had pitched a tent and first claimed land that became Traveler’s Rest. Susannah died in 1833 and was buried beside her “affectionate husband”.

“…pursuing his favorite occupation, the cultivation of the soil…”
Traveler’s Rest was a working plantation. Isaac Shelby maintained a large work force that included slaves. He bought and sold them and passed them as property to his children. Shelby’s taxable property for 1804 included 42 slaves. Shelby’s account and day books allow a glimpse 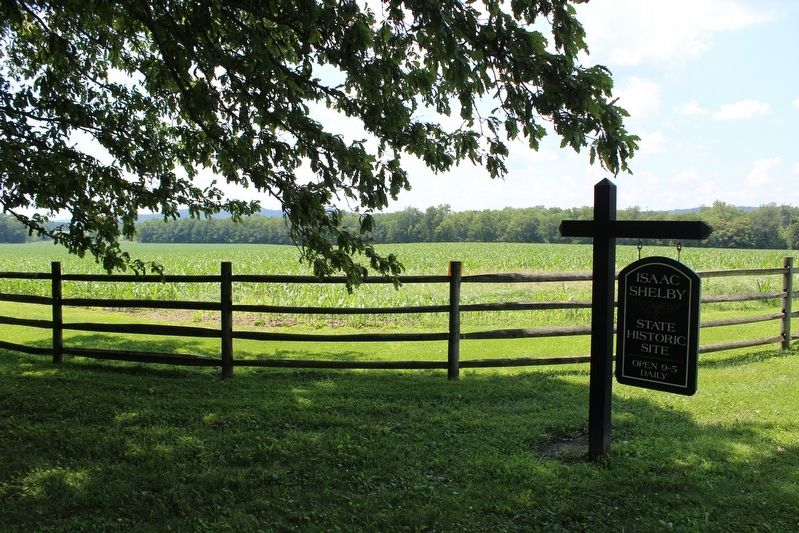 By the 1820s, Isaac Shelby was selling from 40-50 cattle annually and up to 40 hogs. He also bred horses and mules. As wildlife became less abundant, he kept deer on the property for food. His sons Thomas Hart and Isaac Jr. expanded both cattle and hog enterprises; the first dressed beef from the Bluegrass shipped to Europe came from Thomas’ estate. Shelby also raised sheep, mostly for home use, and grew grain, vegetables, fruit, and tobacco. Hemp and whiskey produced at Traveler’s Rest helped antebellum Kentucky become a national leader in both commodities. The plantation annually provided 2000 or more gallons of whiskey and many more gallons of cider and apple brandy in Shelby’s last years. Bartering these for goods and services remained an important part of the local economy.

“I bequeath…”
Isaac Shelby’s 1826 will specified “that here shall be no appraisement nor public sale of any part of my estate after my dissease.” Shelby assured his estate would remain in family hands and distributed land, slaves, personal property and species to Susannah, their ten children who gave birth to over 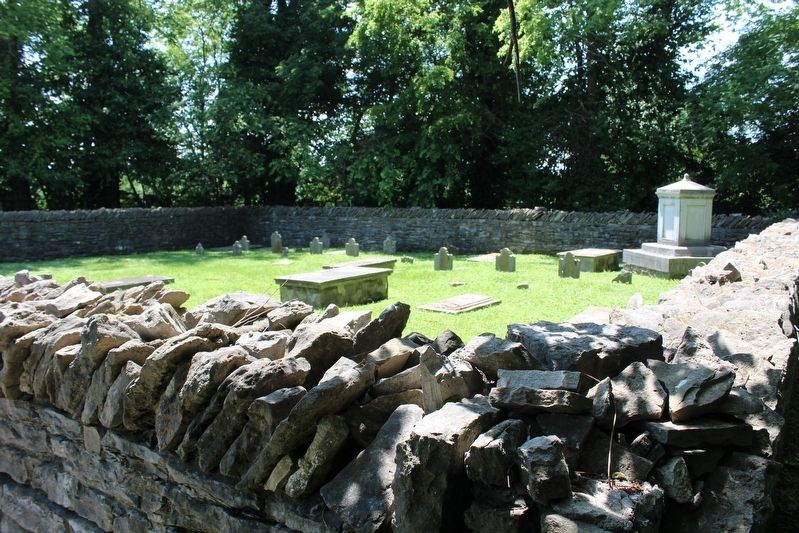 …to my beloved Wife Susannah Shelby all my Hous hold furniture, and Plate.

…I also give and bequeath to my beloved wife all my stock of Horses, mules, cattle, sheap…

…I lend to my beloved Wife the plantation…all the Slaves now in my possession, and the Farming Utensils for and during her life. When they shall descend to my son Alfred Shelby and his heirs…

The Shelby Estates
Through grants, preemptions, military warrants, inheritance, and purchase, Isaac Shelby acquired substantial land throughout the Bluegrass region. As early as 1789, Shelby and his father Evan laid claim to nearly 14,000 acres in Kentucky’s three original counties of Fayette, Lincoln, and Jefferson. Land represented wealth and status and allowed prosperous early settlers to extend Southern slaveholding society westward. Maintaining and enlarging these holdings was a primary objective for Shelby.

Shelby gave or willed his children portions of his estate, assuring their position in society and continued influence of the Shelby family name. 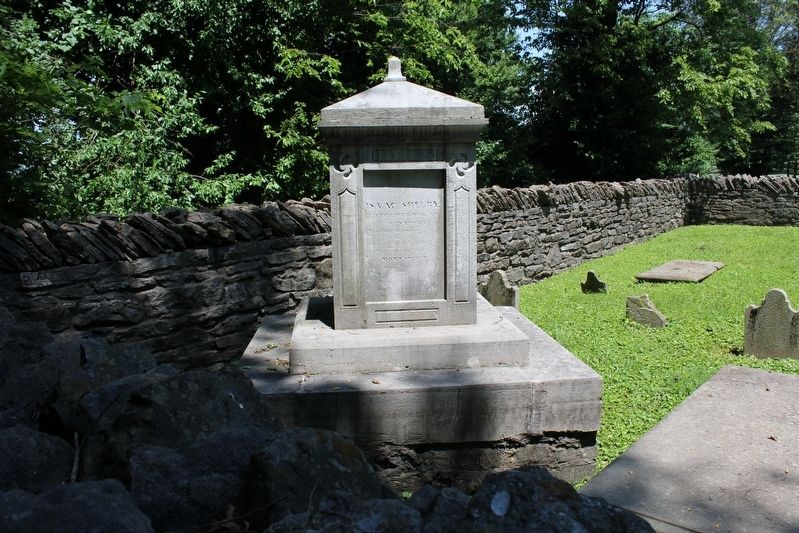 Isaac Shelby came to Kentucky, then part of Virginia, in 1775 as surveyor for Henderson Company. About 30 mountainous miles from Boonesborough, on a branch of the Hanging Fork of Dix River in present day Lincoln County near Danville, he found “the most beautiful land he had ever seen.” Shelby camped there and before leaving Kentucky the following year, would clear cane, plant corn, and construct a rough structure to “improve the holding” and secure claim to it. This and other tracts were officially granted to him on February 7, 1780.

Intending to settle permanently at Knob Lick, Shelby returned in 1782 and built a large log cabin where his tent had stood. He brought his new wife Susannah back a year later, and soon began construction of Traveler’s Rest on cleared land near the cabin. Completed by 1786, the residence was one of the first stone houses in Kentucky.

Described ten years later as “a large and well improved farm, and a plain but neat stone house,” Traveler’s Rest was fertile soil for Shelby and family – ten of eleven children were born at the increasingly productive plantation. Located near the Wilderness Road, the Shelby home also became known for its hospitality and gracious welcome.

Traveler’s Rest burned in 1905. The original detached brick kitchen remains intact. Southern plantation kitchens were often designed for a variety of functions, and under one roof might contain a kitchen, well, dairy, smokehouse, and laundry. At Traveler’s Rest, some of these may have been separated from the main structure. Over time plantation outbuildings like this have become identified as slave quarters even when primarily a kitchen, loom house, or other structure.

Location. 37° 33.977′ N, 84° 47.029′ W. Marker is near Stanford, Kentucky, in Lincoln County. Marker can be reached from Isaac Shelby Road. Marker is located at the Isaac Shelby State Historic Site. Touch for map. Marker is in this post office area: Stanford KY 40484, United States of America. Touch for directions.