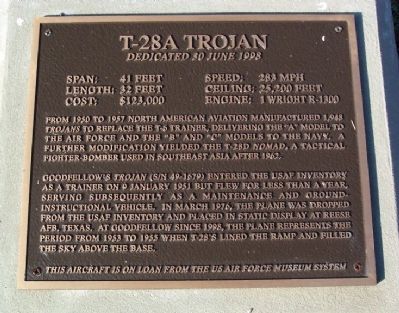 From 1950 to 1957 North American Aviation manufactured 1,948 Trojans to replace the T-6 trainer, delivering the "A" Model to the Air Force and the "B" and "C" Models to the Navy. A further modification yielded the T-28D Nomad, a tactical fighter-bomber used in Southeast Asia after 1962.

Goodfellow's Trojan (S/N 49-1679) entered the USAF inventory as a trainer on 9 January 1951 but flew for less than a year, serving subsequently as a maintenance and ground-instructional vehicle. In March 1976, the plane was dropped from the USAF inventory and placed in static display at Reese AFB, Texas. At Goodfellow since 1998, the plane represents the period from 1953 to 1955 when T-28's lined the ramp and filled the sky above the base.

This aircraft is on loan from the US Air Force Museum system.

Topics. This historical marker is listed in these topic lists: Air & Space • Education 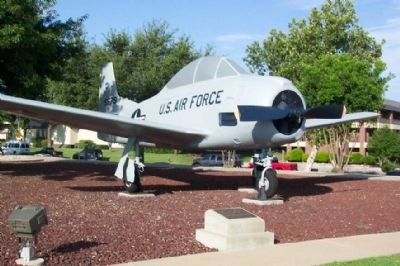 More about this marker. Access is restricted since marker is on an active United States Air Force base.