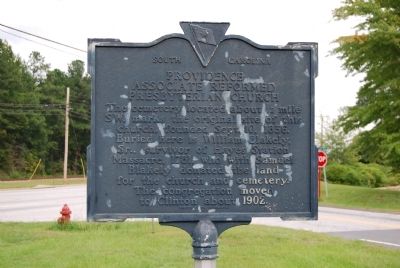 The cemetery located about 1/2 mile SW, marks the original site of the church, founded Sept. 10, 1836. Buried here is William Blakely, Sr., survivor of Hayes Station Massacre, 1871, who with Samuel Blakely donated the land for the church and cemetery. The congregation moved to Clinton about 1902.

Topics. This historical marker is listed in these topic lists: Cemeteries & Burial Sites • Churches & Religion. A significant historical date for this entry is September 10, 1941.

Other nearby markers. At least 10 other markers are within 2 miles of this marker, measured as the crow flies. William C. Dobbins Highway (within shouting distance of this marker); Malcolm A. MacDonald

Additional commentary.
1. About the Hayes Station Massacre
Located on land owned by the Laurens County Historical Association, the [site was the location] of a small American post known as Hayes Station. Named for its commander, Colonel Joseph Hayes, the post was garrisoned by forty Patriot soldiers.

In November 1781, following the Cloud's Creek Massacre, a communique was dispatched to Colonel Hayes informing him that Bloody Bill Cunningham was on a rampage in the area and ordering him to abandon his base.

Hayes had just returned from a scouting expedition on which he had found no evidence of Cunningham or his men. As a consequence, he decided to disregard the order and remain at his post. Word of his decision was sent to a nearby American installation in the event that aid might be needed.

Shortly thereafter, a group of Cunningham's marauders appeared at Hayes Station with a warning that if any shots were fired from the fort, all the Patriots there would die. No sooner had the words been spoken than a blast from a Patriot gun felled one of the Tories.

Presently, Bloody Bill arrived on the scene. Rather than launching an assault, he sent a courier under a flag of truce with the proposition that if the Patriots surrendered Hayes Station, no blood would be shed. On the other hand, he promised that resistance would be met with indiscriminate slaughter.

Wary because of Bloody Bill's lack of integrity and confident that Patriot reinforcements would arrive in time to chase the Tories away, Colonel Hayes refused to capitulate. A gunfight of several hours' duration ensued. To end the stalemate, Cunningham's men fired flaming ramrods onto the roof of the outpost. Fire quickly engulfed the building. Unable to breathe in the smoke-filled inferno, Colonel Hayes led his coughing and choking soldiers out with their hands in the air.

True to his promise, Bloody Bill promptly strung up Hayes and one of his men. But before the hanging was completed, the pole holding the rope gave way. As the two half-dead men gasped for air, Cunningham finished them with his sword.