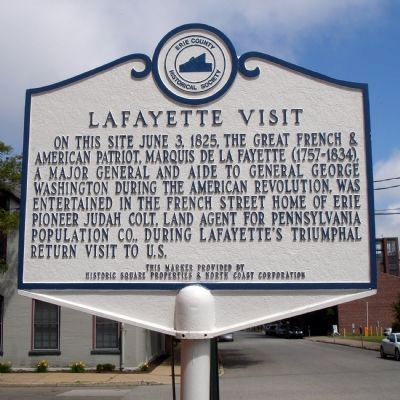 June 24, 2008
1. Lafayette Visit Marker
Inscription.
Lafayette Visit. . On this site June 3, 1825, the great French and American patriot, Marquis de La Fayette (1757-1834), a Major General and aide to General George Washington during the American Revolution, was entertained in the French Street home of Erie Pioneer Judah Colt, land agent for Pennsylvania Population Co., during Lafayette’s triumphal return visit to U.S. . This historical marker was erected by Erie County Historical Society and the Historic Square Properties and North Coast Corporation. It is in Erie in Erie County Pennsylvania

Topics and series. This historical marker is listed in these topic lists: Notable Events • Patriots & Patriotism. In addition, it is included in the Lafayette’s Farewell Tour series list. A significant historical month for this entry is June 1825.

Other nearby markers. At least 8 other markers are within walking distance of this marker. Erie Steam Bakery (here, next to this marker); O'Donnell House (a few steps from this 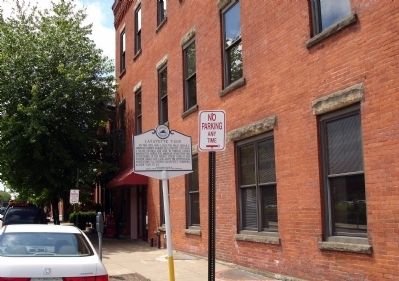