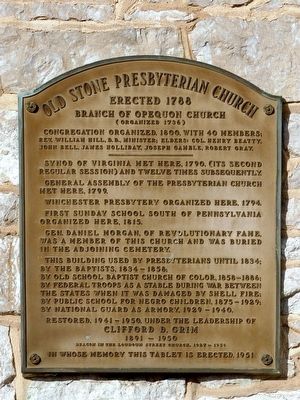 Photographed By Allen C. Browne, October 18, 2015
1. Old Stone Presbyterian Church Marker
Inscription.
Old Stone Presbyterian Church. Erected 1788. , Branch of Opequon Church (organized 1736), Congregation organized, 1800, with 40 members; Rev. William Hill, D.D., Minister; Elders: Col. Henry Beatty, John Bell, James Holliday, Joseph Gamble, Robert Gray., Synod of Virginia met here, 1790. (Its second regular session) and twelve times subsequently., General Assembly of the Presbyterian Church met here, 1799., Winchester Presbytery organized here, 1794., First Sunday School south of Pennsylvania organized here, 1815., Gen. Daniel Morgan, of Revolutionary fame, was a member of this church and was buried in the adjoining cemetery. , This building used by Presbyterians until 1834; by the Baptists, 1834-1858; by Old School Baptist Church of Color, 1858-1886; by Federal troops as a stable during War between the States when it was damaged by shell fire; by Public School for Negro Children, 1875-1929; by National Guard as armory, 1929-1940. ,
Restored, 1941-1950, under the leadership of , Clifford D. Grim , 1891-1950 , Deacon in the Loudoun Street Church, 1927-1950 , in whose memory this tablet is erected, 1951.. . This historical marker was erected in 1951. It is in Winchester Virginia

Gen. Daniel Morgan, of Revolutionary fame, was a member of this church and was buried in the adjoining cemetery. 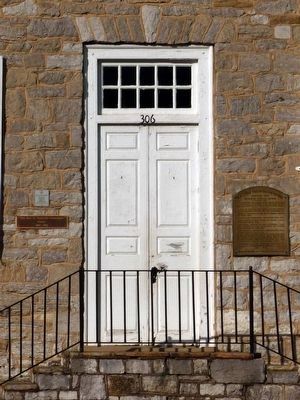 Topics and series. This historical marker is listed in this topic list: Churches & Religion. In addition, it is included in the American Presbyterian and Reformed Historic Sites series list. 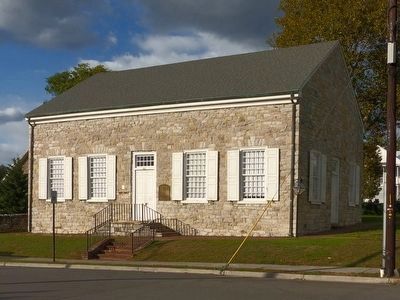 Constructed in 1788 of native limestone, this church served as the meeting site of the Synod of Virginia in 1790 and of the PCUSA General Assembly in 1799. Winchester Presbytery was organized here in 1794. After 1834, the building served as a Baptist church (1834-1858); the Old School Baptist Church of Color (1858-1886); a public school for African American children (1875-1929); and a National Guard armory (1929-1940). Returned to the ownership of the First Presbyterian Church of Winchester in 1932, extensive renovations of the building began in 1944 and were completed in 1950. The building has since been used for meetings of the presbytery and synod. 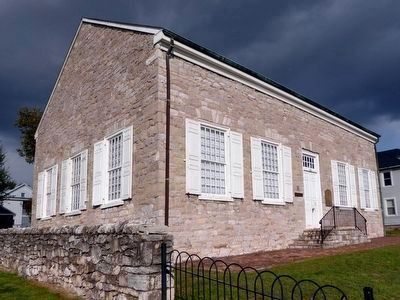 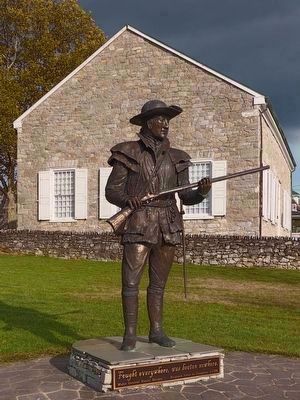 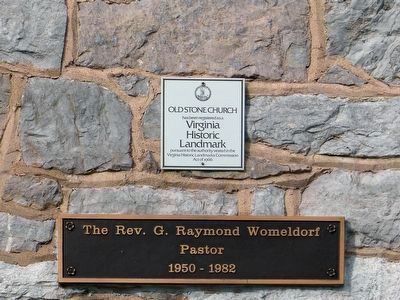 Photographed By Allen C. Browne, October 18, 2015
6. Old Stone Church
has been registered as a
Virginia
Historic
Landmark
Pursuant to authority vested in the Virginia Historic Landmarks Commission Act of 1966