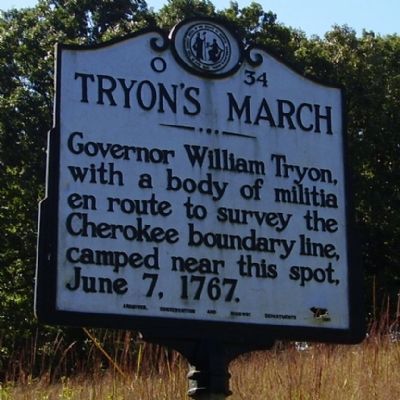 Photographed By Stanley and Terrie Howard, October 4, 2008
1. Tryon's March Marker
Inscription.
Tryon's March. . Governor William Tryon, with a body of militia en route to survey the Cherokee boundary line, camped near this spot June 7, 1767. . This historical marker was erected in 1951 by Archives, Conservation and Highway Departments. It is in Kross Keys in Polk County North Carolina

Governor William Tryon, with a body of militia en route to survey the Cherokee boundary line, camped near this spot June 7, 1767.

Topics and series. This historical marker is listed in these topic lists: Colonial Era • Native Americans. In addition, it is included in the North Carolina Division of Archives and History series list. A significant historical month for this entry is June 1931. 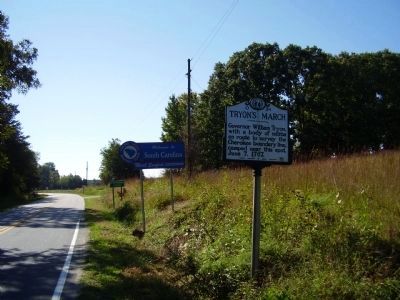 Regarding Tryon's March. William Tryon (1729–88) was an English colonial governor in North America. After a distinguished army career he was appointed (1764) lieutenant governor of North Carolina and succeeded (1765) Arthur Dobbs as governor. Tryon was an able administrator but became unpopular with the colonists because of his rigorous suppression (1771) of the Regulator movement.

In 1771 he was appointed governor of New York, and at the outbreak of the American Revolution he was forced to remain on a British ship in the harbor. Tryon returned to power when William Howe took the city (1776), and later (1777, 1779) he led Tory raids in Connecticut. 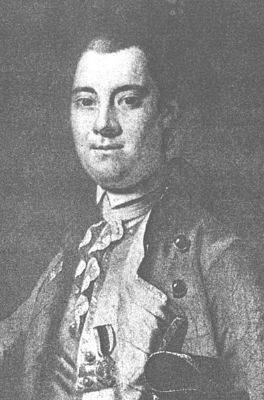