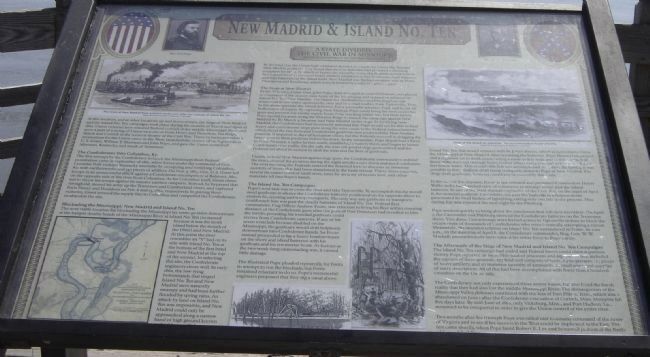 At this location, and at other locations up and down stream, the Siege of New Madrid and the Island No. Ten campaigns took place during the months of March and April of 1862. Union victories here ensured Federal control of the middle Mississippi River and were part of a string of Union victories at Forts Henry and Donelson, Pea Ridge, Shiloh and Corinth in the western theater of the Civil War. These victories provided momentum for the Union cause in the West, launched the careers of such generals as U.S. Grant, William T. Sherman and John Pope, and gave the Union control of Missouri, Kentucky, and much of Tennessee.

The Confederates Take Columbus, Ky.
The first attempt by the Confederacy to block the Mississippi from Federal penetration came in September of 1861, when forces under the command of Leonidas Polk violated Kentucky neutrality by occupying and fortifying Columbus, Ky. with earthenworks and 140 pieces of artillery. On Nov. 7, 1861, Gen. U.S. Grant led troops in an unsuccessful attack against a Confederate encampment at Belmont, Mo, on the opposite side of the river from Columbus. As for Columbus itself, Grant chose 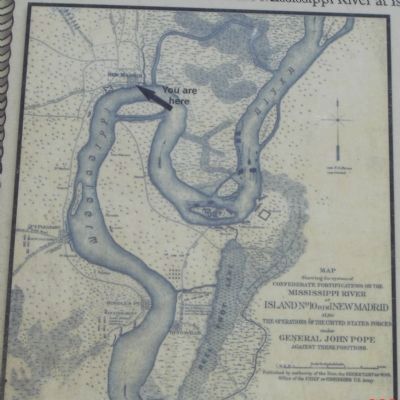 Click or scan to see
this page online
not to throw his troops against its massive earthen ramparts. Instead, he bypassed that stronghold, moved his army up the Tennessee and Cumberland rivers, and captured Forts Henry and Donelson on Feb. 6 and 13, 1862, respectively. In gaining these victories, Grant severed the supply line to Columbus and compelled the Confederates to abandon the site.

By the time that the Union high command decided to assault the Island No. Ten and New Madrid positions, they found that Confederates had prepared a daunting reception for them. To attack or bypass the island 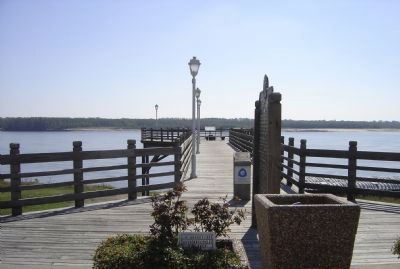 October 10, 2008
3. New Madrid & Island No. Ten Marker
The marker is on a boardwalk overlook which offers an outstanding view of the river bend.
by water, the Federals would have to face a gauntlet of 43 pieces of heavy artillery emplaced in five Tennessee shore batteries and four batteries on the island itself. New Madrid was flanked on either side by Forts Thompson and Bankhead, which were defended by a total of 24 heavy guns.

The Siege at New Madrid
In late February, Union Gen. John Pope, then stationed in central Missouri, was placed in command of the 20,000-man Army of the Mississippi and ordered to advance on Island No. Ten/New Madrid. The Island No. Ten batteries could be supplied and reinforced in two ways: upstream by river and by a road leading from Tiptonville, Tenn. to the shore opposite the island defenses. For a successful advance, Pope had to cut off both routes of supply. By capturing New Madrid, Pope could bring the river under his guns and prevent any enemy supply boats from reaching Island Nu. Ten from below. Pope moved his army along the Sikeston Ridge to launch his campaign against New Madrid, the Confederates had incorrectly assumed that Pope would not be able to haul heavy and cumbersome siege guns along the miry roads to the Federal entrenchments, which faced the two forts and Confederate gunboats that protected New Madrid position. It required 10 days of herculean effort, but the Federals succeed in dragging the heavy guns to their positions before the town. In the meantime, Pope 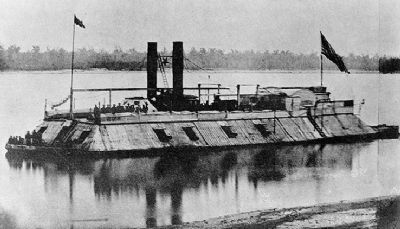 4. USS Carondelet
The Carondelet was a "City Class" river ironclad produced by James Eads in St. Louis, Missouri. These were called "Pook Turtles" for their designer, S.M. Pook. At the time of the campaign this ironclad carried four 8-inch smoothbore, one 42-pdr smoothbore, six 32-pdr smoothbore, one 50-pdr rifled gun, one 30-pdr rifled gun, and a 12-pdr howitzer. The Carondelet saw action in all the major naval operations in the west including Fort Donelson, Siege of Island No. Ten, Battle of Memphis, actions against the CSS Arkansas, and the Vicksburg and Red River campaigns. She was disarmed as sold at the end of the war.

[U.S. Naval Historical Center]
dispatched a force to Point Pleasant, 11 miles further south, established a battery there, and began to harass Confederate river traffic. On the 13th, the four 128-pound siege guns arrived and the Federals set about in earnest to shell the forts and the fleet of gunboats.

Unable to hold New Madrid against siege guns, the Confederate commanders ordered the evacuation of the position during the night amidst a rain storm and much confusion. The next morning the Federals entered the deserted forts to discover an immense quantity of stores that had been abandoned in the hasty retreat. Thirty-three cannons, several thousand stand of small arms, tents for an army of 10,000 men, and other materials fell into Pope's hands.

The Island No. Ten Campaigns
Pope's next task was to cross the river and take Tiptonville. To accomplish this he would need gunboats to silence the Confederate batteries positioned on the opposite shore to contest his crossing and troop transports. The only way any gunboats or transports could reach him was past the deadly batteries of Island No. Ten. Federal fleet commander, Flag Officer Andrew Foote, was reluctant to bring his fleet within shooting distance of the Confederate guns after the guns of Fort Donelson had revealed to him the terrific pounding his ironclad gunboats could receive from Confederate cannons. If any of his seven ironclads 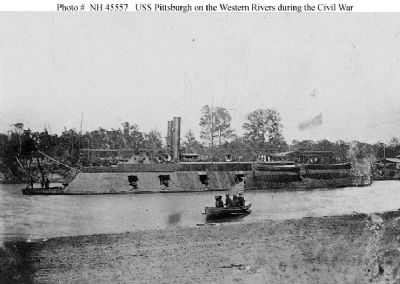 5. USS Pittsburg
Like the Carondelet, the Pittsburg was a "City Class" ironclad river gunboat, also built by Eads at St. Louis, Missouri in 1861. The Pittsburg was armed at the time of the campaign with two 30-pdr rifled cannon, three 8-inch smoothbores, two 42-pdr rifled guns, six 32-pdr smoothbores, and one 12-pdr howitzer. She also saw action in all the major western naval operations on the Mississippi and was sold after the war as excess.

[U.S. Naval Historical Center]
became disabled on the Mississippi, the gunboats would drift helplessly downstream into Confederate hands. So Foote instead proceeded to lay a heavy bombardment on the shore and island batteries with his gunboats and his ten mortar boats. As furious as the two-week-long cannonading was, it caused little damage.

The frustrated Pope pleaded repeatedly for Foote to attempt to run the blockade, but Foote remained reluctant to do so. Pope's resourceful engineers proposed that they dig a canal above Island No. Ten that would connect with St. John's Bayou, which in turn emptied into the Mississippi at New Madrid, thus bypassing the batteries. Pope blessed this project and a regiment set to work constructing a canal 50 feet wide and 12 miles long, 6 of those miles were cut through heavy timber where every tree had to be sawed off 4 1/2 feet below water. This remarkable feat was accomplished in 19 days. By April 4, it was possible to ferry shallow-draft troop transports down to Pope at New Madrid. The deep-draft gunboats, however, could not be moved by this route.

In face of this impasse, Foote at last relented and permitted Commodore Henry Walke and a hand-picked crew of volunteers to attempt to run past the Island batteries. In one of the most dramatic episodes of the Civil War, on the night of April 6, the ironclad gunboat, Carondelet, ran past the batteries in a furious 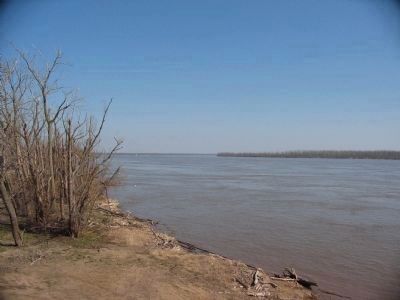 By Craig Swain, March 17, 2009
6. Looking Upriver from the Marker Loction
The river has shifted course with time, so the location of St. John's Bayou is not easily visited today. The swampland was drained in the first half of the 20th Century when the New Madrid Floodway was installed to drain the land and control flooding. That floodway enters the Mississippi River just behind the trees on the left of this photo.
storm, punctuated by vivid flashes of lightening, taking only two hits in the process. This daring feat was repeated the next night by the Pittsburg.

Pope worked quickly to bring about the conclusion that was now inevitable. On April 7, the Carondelet and Pittsburg silenced the Confederate batteries on the Tennessee shore. This done, Union troops were ferried across to Tiptonville in time to block the escape route of thousands of Confederates who were frantically attempting a retreat. Meanwhile, the stranded soldiers on Island No. Ten surrendered to Foote. At 2:00 a.m., on the morning of April 8, the Confederate commander, Brig. Gen. W.W. Mackall, unconditionally surrendered his entire force to Pope's army.

The Aftermath of the Siege of New Madrid and Island No. Ten Campaigns
The Island No. Ten campaign had ended and Federal forces could claim a glorious victory. Pope reported an incredible haul of prisoners and equipment that included the capture of three generals, 273 field and company officers, 6,700 privates, 123 pieces of heavy artillery, and an immense quantity of ammunition, small arms, and supplies of every description. All of this had been accomplished with fewer than a hundred casualties on the Union side.

The Confederacy not only experienced these severe losses, but also faced the harsh reality that they had also lost the middle Mississippi 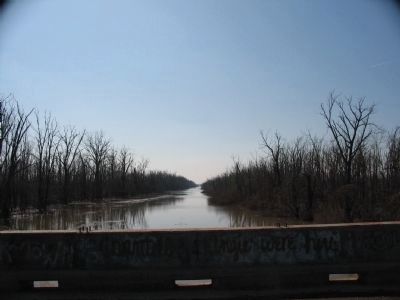 By Craig Swain, March 17, 2009
7. New Madrid Floodway
The New Madrid Floodway now drains the bottom land once known as St. John's Bayou. This long, straight, and wide ditch also serves as flood control in the event of high water on the Mississippi River. However, as result, the location where Pope's steamboats worked through the swamp is today dry farmland.
River. The disintegration of the Mississippi Valley defenses continued with the loss of Fort Pillow, Tenn., which was abandoned on June 1 after the Confederate evacuation of Corinth, Miss. Memphis fell five days later. By mid-June of 1862, only Vicksburg, Miss., and Port Hudson, La., remained to be conquered in order to give the Union control of the entire river.

Two months after his triumph Pope was called east to assume command of the Army of Virginia and to see if his success in the West could be duplicated in the East. The test came shortly, when Pope faced Robert E. Lee and Stonewall Jackson at the Battle of Second Bull Run.

Topics and series. This historical marker is listed in this topic list: War, US Civil. In addition, it is included in the Former U.S. Presidents: #18 Ulysses S. Grant, and the Missouri - A State Divided: The Civil War in Missouri series lists. A significant historical month for this entry is April 1862.

More about this marker. In the upper left is a drawing of The levee at New Madrid from a sketch made soon after the capture of Island No. Ten. In the lower left is a map of Mew Madrid and surrounding area from an official military report. In the lower center are drawings of the tree cutting operations. In the upper right is a View of the attack on Island No. Ten by Commodore Foote's flotilla. Portraits of Gens. Pope and Mackall flank the title.

Also see . . .
1. The Battle of New Madrid and Island No. 10. Page offering a summary of the campaign and links to official reports from both sides. (Submitted on October 10, 2008, by Craig Swain of Leesburg, Virginia.)