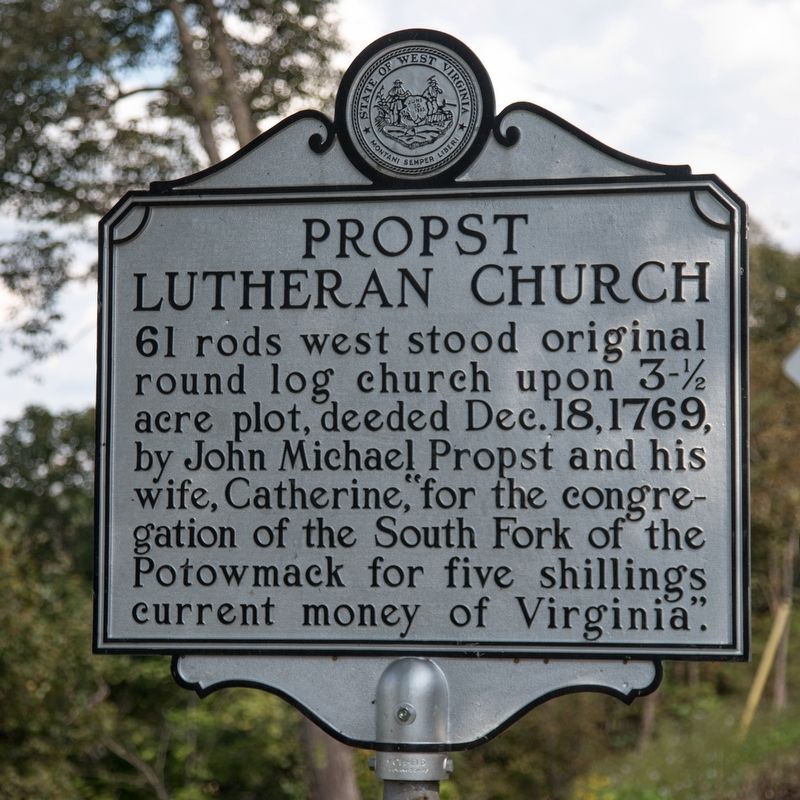 61 rods west stood original round log church upon 3½ acre plot, deeded Dec.18, 1769, by John Michael Propst and his wife, Catherine, “for the congregation of the South Fork of the Potowmack for five shillings current money of Virginia.”

Topics and series. This historical marker is listed in these topic lists: Churches & Religion • Colonial Era. In addition, it is included in the West Virginia Archives and History series list. A significant historical date for this entry is December 18, 1769. 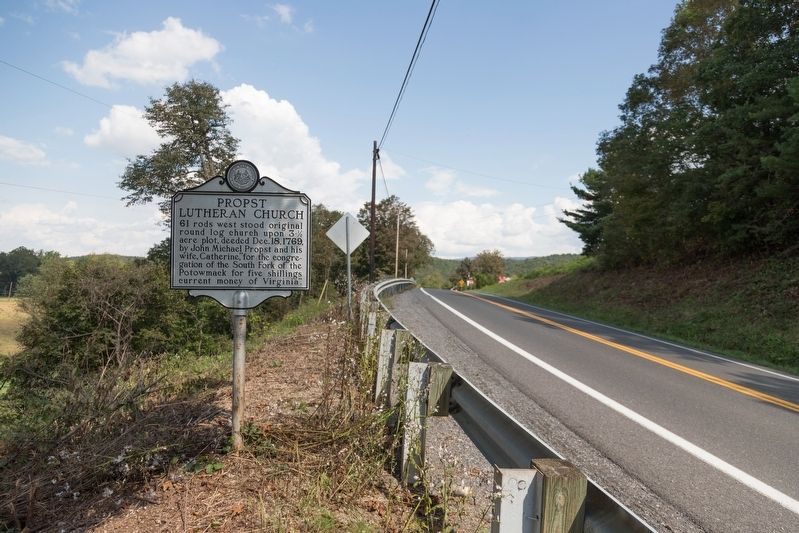 Also see . . .  Old Propst Church Building and Site - National Register of Historic Places Inventory Nomination Form. West Virginia Department of Arts, Culture and History website entry:
Statement of Significance.
It was in about 1760 that German immigrants had first established strong community ties in the valleys of what is now Pendleton County, West Virginia. The fertile plains between the mountains were inviting to the industrious people who began to farm here. An outgrowth of their activity in the form of a formal Lutheran congregation seemed only natural, and they carried their ambitions a little further when making additional use of quarters and pastors for the education of their children. The name of the Propst Church is fitting, also, for it was constructed on land deeded by John Michael Propst for perpetual use of the Lutheran immigrants.

The architecture of the Propst Church is very plain and simple, but even in its simplicity the building is of interest, for it is a link with the pioneer beginnings of its congregation, a group which was in existence within a few years after the first settlement within present Pendleton County, West Virginia. Early establishment of religious institutions by German immigrants indicates that the church was a great influence in the settlement of the area.

One Roger Dyer probably made the first permanent settlement in what is now Pendleton County in 1747. Soon after, others followed, among whom was John Michael Propst. Propst located in the South Fork region sometime before 1749 when, it is recorded, he entertained in his home a group of Moravian missionaries from Bethlehem, Pennsylvania. The first legal record of John Propst in then Augusta County, Virginia, was a deed for 110 acres of land along the South Fork, dated 1753.

A congregation was in existence in 1760, but the first church building was probably not constructed until a few years later. The land that John Michael Propst sold to the congregation (for the nominal sum of 5 shillings) and on which the first church house was erected was not bought by Propst until 1761. He sold 312 acres to the church commissioners for “the members of the congregation of the Lutheran church at the South Fork of Potowmack” in 1769. The first building may have been in existence at the time John Propst sold the land to the congregation in 1769, but it is unlikely that it was there when he bought the land in 1761.

The first church was of round-log construction with clay chinking between the logs and a log chimney with a clay lining. When the second church was built, the first was relocated to the opposite end of the property and used as a German public school where children of members were taught by the minister or others.

The first resident minister of the Propst Church was one Peter Mischler who emigrated from Germany in 1761. In 1769 Mischler appeared before the Evangelical Lutheran Ministerium of Pennsylvania in Philadelphia to gain admission to that body as a preacher. He was not accepted by the Ministerium because he did not meet the qualifications, and it was claimed that he had been involved in church disturbances and revolts in the past. Mischler was told to reappear before the Ministerium the following year, but there are no indications that he did so. It is known that Mischler was preaching in the South Fork area in the early 1770s, as he sued the congregation for non-payment for his reading in church and teaching the children. This would make Mischler one of the first teachers as well as ministers and the Propst congregation one of the oldest religious and educational groups in the area. Peter Mischler served the congregation for almost forty years until his death in 1812.

The second church was built of hewn logs and was located where the corner of the cemetery is at present. It was used until about 1885. At that time the home of the area resident by the name of Jack Hoover burned. Since there were plans being made to build a new church, Hoover requested the logs from the old building for use in constructing a new house. The church was dismantled and the logs marked and transported to Broad Run where they were reassembled. The building was later made into a barn and was still in use a few years ago.

The third church building was erected about 1887. It is a simple frame building painted white. Rectangular in shape, there are three windows on each of the two longer sides. The front of the church retains some of the features of the earlier church for it has two separate entrances possibly indicating a stringent separation of the sexes during worship. The steps for the entrance doors are cut stones taken from the foundation of the second building. The raised, goblet-shaped pulpit was also an influence from the earlier church. Abandoned in 1920, it remained vacant and deteriorating until restoration work was started in the late 1960s. By 1974 the structure had been refurbished with minimal effort, and the church and its surrounding land were once more an important part of the community which it had helped to found and watched grow over two centuries. (Submitted on September 27, 2018.)
Credits. This page was last revised on January 27, 2022. It was originally submitted on September 27, 2018, by J. J. Prats of Powell, Ohio. This page has been viewed 385 times since then and 6 times this year. Photos:   1, 2. submitted on September 27, 2018, by J. J. Prats of Powell, Ohio.
Share this page.