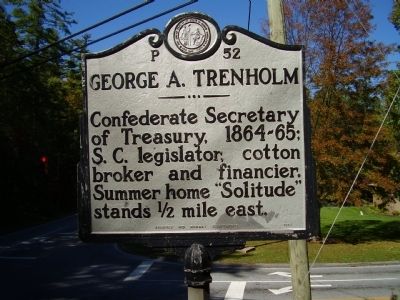 Other nearby markers. At least 8 other markers are within walking distance of this marker. St. John in the Wilderness (about 500 feet away, measured in a direct line); C.G. Memminger (about 600 feet away); Flat Rock (approx. 0.7 miles away); Connemara (approx. ¾ mile away); Carl Sandburg 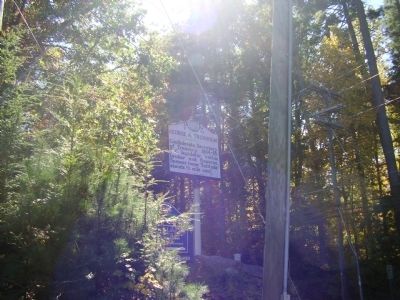 Click or scan to see
this page online
(approx. ¾ mile away); The Old Flat Rock Post Office (approx. 0.8 miles away); Outdoor Inspiration (approx. 0.9 miles away); A Home for Champions (approx. one mile away). Touch for a list and map of all markers in Flat Rock. 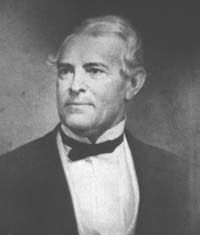 October 12, 2008
3. George A. Trenholm
George Alfred Trenholm (February 25, 1807 – December 9, 1876) was a prominent politician in the Confederate States of America. George Alfred Trenholm was born in Charleston, South Carolina. At the age of sixteen he left school and went to work for a major cotton broker, John Fraser & Co. in Charleston. By 1853 he was head of the company. When the Civil War broke out, John Fraser & Co. became the Confederate government's overseas banker and financed its own fleet of blockade runners. Trenholm was appointed Confederate Secretary of the Treasury on July 18, 1864. He fled Richmond with the rest of the government in April, 1865. Due to illness he resigned on April 27, 1865. He was later briefly imprisoned at Fort Pulaski near Savannah, Georgia.
Credits. This page was last revised on June 30, 2021. It was originally submitted on October 12, 2008, by Stanley and Terrie Howard of Greer, South Carolina. This page has been viewed 1,259 times since then and 8 times this year. Photos:   1, 2, 3. submitted on October 12, 2008, by Stanley and Terrie Howard of Greer, South Carolina. • Craig Swain was the editor who published this page.
Share this page.