Canal Winchester and the Ohio and Erie Canal 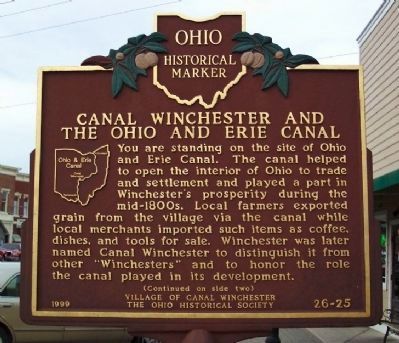 [Marker Front]:
You are standing on the site of Ohio and Erie Canal. The canal helped to open the interior of Ohio to trade and settlement and played a part in Winchester's prosperity during the mid-1800s. Local farmers exported grain from the village via the canal while local merchants imported such items as coffee, dishes, and tools for sale. Winchester was later named Canal Winchester to distinguish it from other "Winchesters" and to honor the role the canal played in its development.
(Continued on side two)

[Marker Reverse]:
(Continued from side one)
Construction of the Ohio and Erie began in 1825 and the first canal boat sailed through Winchester in 1831. The entire 308-mile length of the waterway, from Cleveland to Portsmouth, opened in 1832. The advent of the railroad in Ohio in the 1850s heralded the end the canal era. The last canal boats passed through Winchester in 1901. After many years of decline, the Ohio and Erie Canal was abandoned in 1913.

Erected 1999 by Village of Canal Winchester and The Ohio Historical Society. (Marker Number 26-25.) 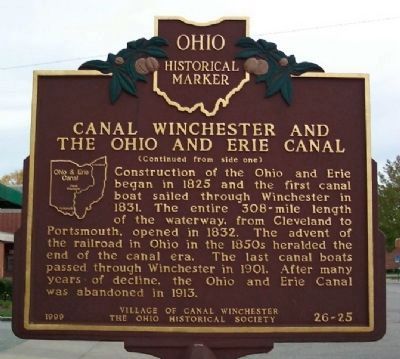 
Topics and series. This historical marker is listed in these topic lists: Industry & Commerce • Man-Made Features • Waterways & Vessels. In addition, it is included in the Ohio and Erie Canal, and the Ohio Historical Society / The Ohio History Connection series lists. A significant historical year for this entry is 1825. 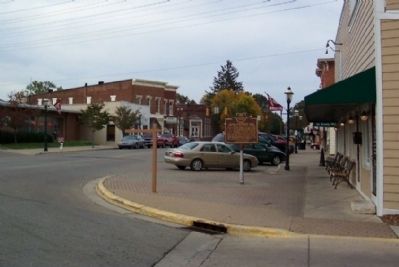