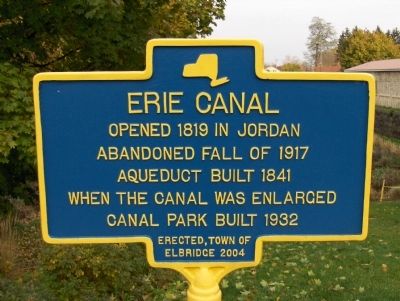 Photographed By Frank Sadowski, November 12, 2007
1. Erie Canal Marker - Jordan, New York
Inscription.
Erie Canal. .
Opened 1819 in Jordan Abandoned Fall of 1917 Aqueduct built 1841 when the canal was enlarged Canal Park built 1932. . This historical marker was erected in 2004 by Town of Elbridge. It is in Jordan in Onondaga County New York

Topics and series. This historical marker is listed in these topic lists: Industry & Commerce • Notable Places • Waterways & Vessels. In addition, it is included in the Erie Canal series list. A significant historical year for this entry is 1819.

Location. 43° 3.954′ N, 76° 28.4′ W. Marker is in Jordan, New York, in Onondaga County. Marker is on North Main Street (New York State Route 317), on the right when traveling north. The marker is located within the Jordan Canal Park in the Village of Jordan. Touch for map. Marker is in this post office area: Jordan NY 13080, United States of America. Touch for directions.

Other nearby markers. At least 8 other markers are within one mile of this marker, measured as the crow flies. The Canalway Trail: Jordan/Jordan Aqueduct and Summit (within shouting distance of this marker); The H. Dodge House (about 300 feet away, measured in a direct line); Jordan (about 700 feet away); Sperry & Rockwell (approx. 0.2 miles 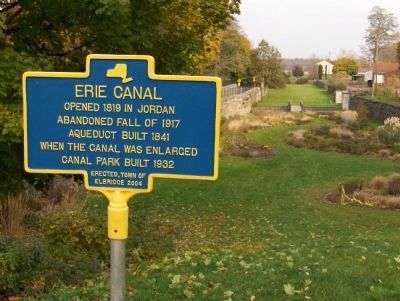 Photographed By Frank Sadowski, November 12, 2007
2. Erie Canal Marker - Jordan Canal Park
The remains of the Jordan Aqueduct, which formerly carried the Erie Canal across the Skaneateles Creek, can be seen in the background of this photo.

Regarding Erie Canal. The Village of Jordan (incorporated in 1835) is within the Town of Elbridge of Onondaga County, New York. Jordan is the larger of two villages in the Town of Elbridge (the other being The Village of Elbridge) and located in the northwest section of the town. This settlement became a center of trade and manufacturing with the building of the Erie Canal, which passed directly through town. The remains of the Jordan aqueduct are now in a park in downtown Jordan. Later, the main railroad line that traveled the length of New York State ran through Jordan. The fortunes of the village declined when the canal closed in 1917 and the railroads lost business to the trucking industry. Although the New York State thruway runs through the Town of Elbridge, and very close to Jordan itself, there was no exit built for the town. 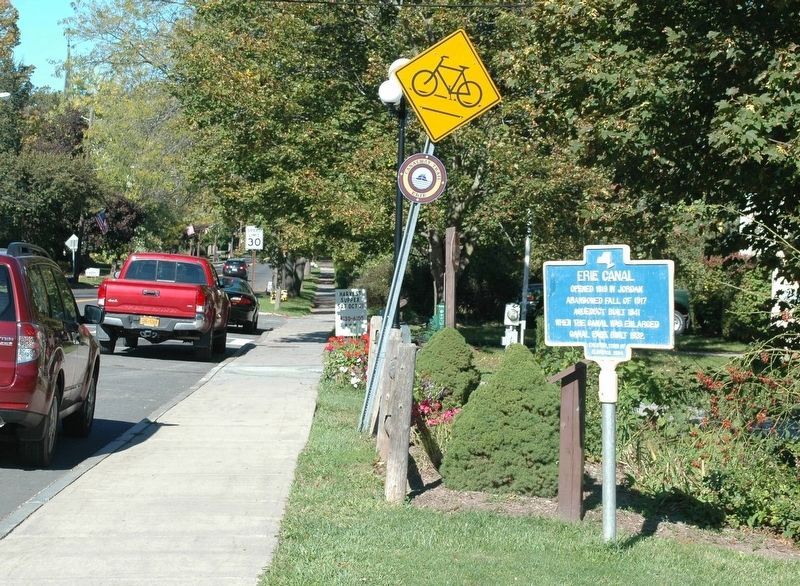 Photographed By Howard C. Ohlhous, October 20, 2017
3. Erie Canal marker on the east side of North Main Street in Jordan
the Erie Canal over Skaneateles Creek. It was abandoned in the fall of 1917 at the end of the canal season. Currently in the Jordan Canal Park you can walk through two of the four aqueduct arches and examine the magnificent stonework. The abandoned canal bed has been made into a garden park including benches and a trail which runs along the bottom of the old canal prism with views of the old canal walls. A modern foot bridge, a recent feature of the Jordan Canal Park, spans the creek and is built on top of the sections of the aqueduct that originally supported the wooden trough that contained the canal water.

Also see . . .  The Erie Canal - The Jordan Aqueduct, Jordan, N.Y. ,. for a comprehensive series of photos of the aqueduct in the Jordan Canal Park. (Submitted on October 15, 2008, by Howard C. Ohlhous of Duanesburg, New York.)