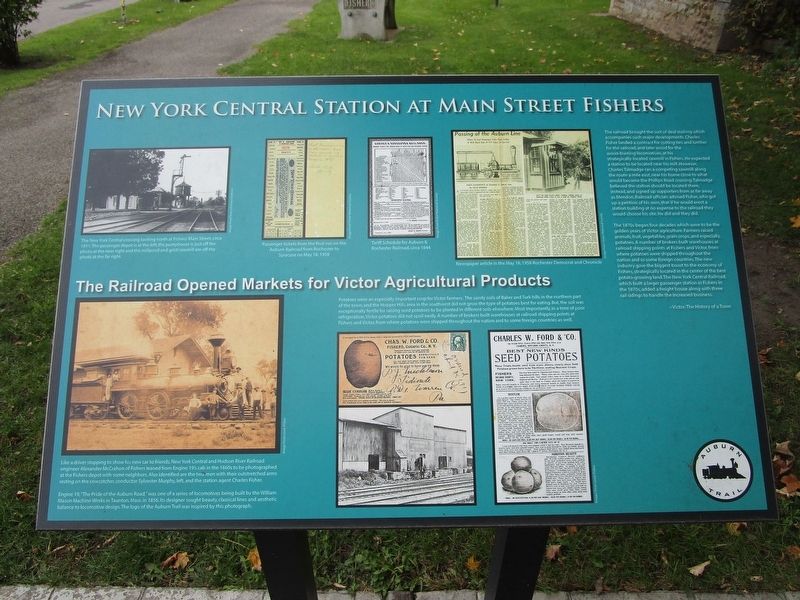 The railroad brought the sort of deal making which accompanies such major developments. Charles Fisher landed a contract for cutting ties and lumber for the railroad, and later wood for the wood-burning locomotives, at his strategically-located sawmill in Fishers. He expected a station to be located near his saw mill. However, Charles Talmadge ran a competing sawmill along the route a mile east, near his home close to what would become the Phillips Road crossing. Talmadge believed the station should be located there, instead, and signed up supporters from as afar away as Mendon. Railroad officials advised Fisher, who got up a petition of his own that if he would erect a station building at no expense to the railroad they would chose his site. He did and they did.

The 1870s began four decades which were to be the golden years of Victor agriculture. Farmers raised animals, fruit, vegetables, grain crops, and especially, potatoes. A number of brokers built warehouses at railroad shipping points at Fishers and Victor, from where potatoes were shipped throughout the nation 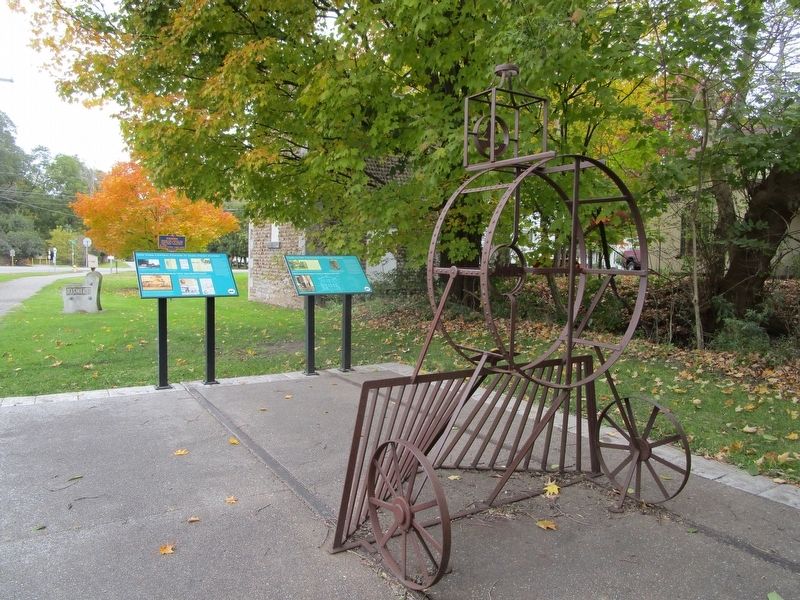 By Anton Schwarzmueller, October 26, 2018
2. New York Central Station at Main Street Fishers Marker
Northward. Left marker.
and to some foreign countries. The new industry gave the biggest boost to the economy of Fishers, strategically located in the center of the best potato-growing land. The New York Central Railroad, which built a larger passenger station in Fishers in the 1870s, added a freight house along with three rail sidings to handle the increased business.
~Victor: The History of a Town.

Passenger tickets from the final run on the Auburn Railroad from Rochester to Syracuse on May 18, 1958.

Newspaper article in the May 18, 1958 Rochester Democrat and Chronicle.

Potatoes were an especially important crop for Victor farmers. The sandy soils of Baker and Turk hills in the northern part of the town, and the Hopper Hills area in the southwest did not grow the type of potatoes best for eating. But, the soil was exceptionally fertile for raising seed potatoes to be planted in different soils elsewhere. Most importantly, in a time of poor refrigeration, Victor potatoes did not spoil easily. A number of brokers built warehouses at railroad shipping points at Fishers and Victor, from where potatoes were shipped throughout the nation and to some foreign countries as well.

Like a driver stopping to show his new car to his friends, New York Central and Hudson River Railroad engineer Alexander McCrahon of Fishers leaned from engine 19's cab in the 1860s to be photographed at the Fishers depot with some neighbors. Also identified are the two men with their outstretched arms resting on the cowcatcher, conductor Sylvester Murphy, left, and the station agent Charles Fisher.

Engine 19, "The Pride of the Auburn Railroad," was one of a series of locomotives being built ay the William Mason Machine Works in Taunton, Mass. in 1856. Its designer sought beauty, classical lines and aesthetic balance to locomotive design. The logo of the Auburn Trail was inspired by this photograph.

Topics. This historical marker is listed in these topic lists: Agriculture • Railroads & Streetcars.