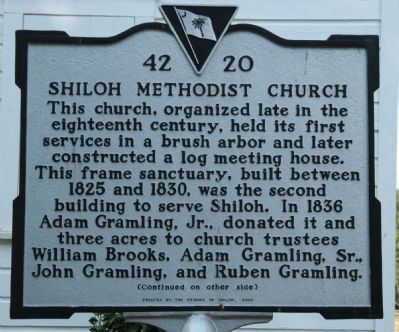 Photographed By Michael Sean Nix, October 18, 2008
1. Shiloh Methodist Church Marker front
Inscription.
Shiloh Methodist Church. . , [Front]: , This church, organized late in the eighteenth century, held its first services in a brush arbor and later constructed a log meeting house. This frame sanctuary, built between 1825 and 1830, was the second building to serve Shiloh. In 1836 Adam Gramling, Jr., donated it and three acres to church trustees William Brooks, Adam Gramling Sr., John Gramling, and Ruben Gramling., [Reverse]: , Shiloh Methodist Church was the mother church of many Spartanburg County Methodist churches and some affiliated with other denominations. It was active until about 1915, when its last 14 members transferred to Inman Methodist Church. The old sanctuary, still an important part of the community, has been the site of an annual homecoming service since 1915. . This historical marker was erected in 2000 by Friends of Shiloh. It is Near Inman in Spartanburg County South Carolina

[Front]:
This church, organized late in the eighteenth century, held its first services in a brush arbor and later constructed a log meeting house. This frame sanctuary, built between 1825 and 1830, was the second building to serve Shiloh. In 1836 Adam Gramling, Jr., donated it and three acres to church trustees William Brooks, Adam Gramling Sr., John Gramling, and Ruben Gramling.

[Reverse]:
Shiloh Methodist Church was the mother church of many Spartanburg County Methodist churches and some affiliated with other denominations. It was active until about 1915, when its last 14 members transferred to Inman Methodist Church. The old sanctuary, still an important part of the community, has been the site of an annual homecoming service since 1915.

Topics. This historical marker is listed in these topic lists: Cemeteries & Burial Sites • Churches & Religion. A significant historical year for this entry is 1825. 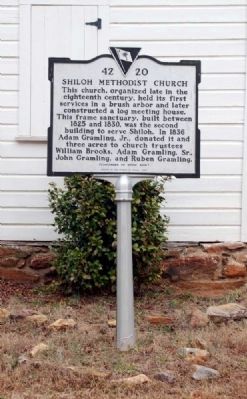 Click or scan to see
this page online
near Inman, South Carolina, in Spartanburg County. Marker can be reached from Blackstock Road (State Highway 40) 0.2 miles north of New Cut Road, on the right when traveling north. Church sits well off the road down a dirt drive way and may have a gate blocking access. Touch for map. Marker is in this post office area: Inman SC 29349, United States of America. Touch for directions.

Regarding Shiloh Methodist Church. The church is an unadorned, one room, rectangular building clad in whitewashed horizontal wood siding. There is a church cemetery that contains grave markers dating from 1816 to 2004. The markers are a mix of granite headstones, old markers that are barely readable or unreadable, and a number of plain field stones. Shiloh Methodist was a circuit church that was dependent on a traveling minister.

The church is one of a handfull of Methodist 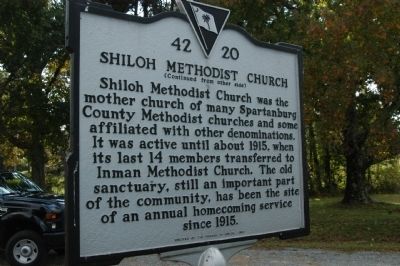 Also see . . .
1. Shiloh Methodist Church, South Carolina Department of Archives and History. Shiloh Methodist Church, built between 1825 and 1830, is significant as a particularly intact example of the vernacular meeting house form of ecclesiastical architecture common in rural churches in the late eighteenth and early nineteenth centuries. (Submitted on October 18, 2008, by Kevin W. of Stafford, Virginia.)

Additional commentary.
1. Shiloh Methodist Church
Located within a remarkable intact rural setting, Shiloh Methodist Church is a simple, unadorned, one-room, rectangular building constructed in a common or vernacular meeting house form and clad in whitewashed horizontally-applied drop or German siding. The rear of the building features a small, three-sided polygonal bay, which is centered on the building, provides additional interior space at the chancel area, and irritates the apse on churches of antiquity. The building sits upon its original foundation of undressed, mortared, slacked, random stone, some of which measures over 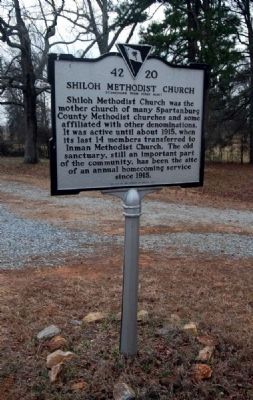 Photographed By Brian Scott, February 17, 2011
4. Shiloh Methodist Church Marker -
Reverse
54' wide. The gable-front roof is steeply pitched, and was originally covered with wood shakes that have since been overlain with asphalt shingles. The original rough-hewn roof rafters, some of which still have bark on them, are intact. Exposed rafter extensions at the eaves are carved or fashioned to have a bird's mouth shape, the only architectural ornamentation on the building. Purlins on each gable are exposed as well.

The three-bay wide facade consists of a central double-leaf entrance with flanking windows. The eight windows are actually cased openings with no sashes and are protected by single-leaf battened shutters composed of five vertically-arranged boards fastened together by an upper and lower horizontally applied rails or battens on the interior. Shutter hardware appears to be non-original steel strap hinges with hook-and-screw eye locking. Doors are constructed of multiple vertically-arranged boards with three, interior, applied, horizontal rails, similar to the shutters. The front door is a four-foot six inch wide double-leaf door, and the side door is single. There are reports that a left side door existed, but was closed off at some point in the past. Steps leading up to the doors are poured concrete and are not original.

The interior walls are whitewashed, 11 1/4" wide, horizontal boards. The existing whitewashed, board and batten ceiling is 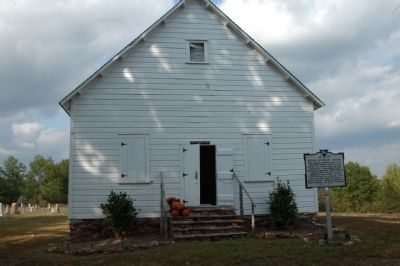 Photographed By Michael Sean Nix, October 18, 2008
5. Shiloh Methodist Church and Marker
Front view of church
not original and is reported to have been installed to prevent birds from nesting in the rafters. The original ceiling was apparently replaced in more recent years. The existing floor material is unfinished, narrow board, tongue-and-grove pine, which is not original. A pair of 7 1/4' x 7 1/4" trimmed wood post occur 48" apart in the center of the building, and apparently help support the ceiling joists of roof structure. A short, vertical, steel strap is visible at the exterior of the wall eave top plate in the same location as the posts, which would seem to indicate some sort of horizontal bar spanning across the building there.

The building has never been wired for electricity or electrical lighting. Candles were used to light the interior space and were placed on simple, wall-mounted, wooden candlesticks; these are still in place, and at least some are original. The original, eleven-foot-long, unfinished pews are still in the building and are of two different designs. Most pews are constructed with basks and seats created from up to fifteen-inch wide pine planks, fastened to solid wood and panels by wedged, mortise and tenon joints. A six-inch high, raised chancel platform with rounded corners occurs at the front of the church, along with a twenty-eight inch high picket alter or communion rail. A crude, built-in pulpit is located at center and leading edge of an additional 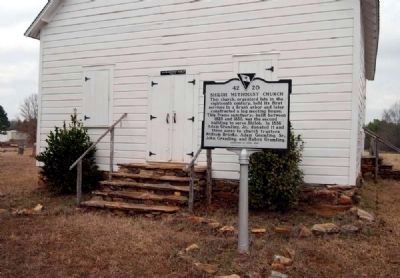 Photographed By Brian Scott, February 17, 2011
6. Shiloh Methodist Church Entrance and Marker
six-inch high platform that forms a hexagon plan shape within the three sided polygonal bay or apse. The polygonal bay creates, on the interior of the building, a ten-foot wide niche with canted wall and ceiling planes.

The church cemetery occupies the back portion of the three-acre lot. The grave markers in the cemetery, dating from 1816 to 2004, are a mixture of granite headstones, still in good condition, old markers with barely-legible lettering, and some with unreadable letters even by tracing the stones, many graves are marked by plain field stones. The Friends of Shiloh Committee, with the assistance of a land surveyor, determined by using a probe that remains are present in many of the spots marked by field stones. These graves are now also marked with plain granite stones.

Significance
Shiloh Methodist Church, built between 1825 and 1830, is significant as a particularly intact example of the vernacular meeting house form of ecclesiastical architecture in rural churches in the late eighteenth and early nineteenth centuries. It is the earliest surviving church sanctuary in Spartanburg County and one of the earliest in the South Carolina upcountry. Its congregation, founded shortly after the American Revolution, is the "mother church" of several Methodist churches in the area and churches of other denominations as well. The church's simplicity 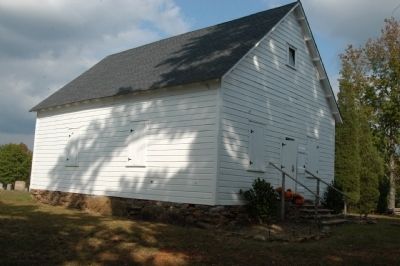 Photographed By Michael Sean Nix, October 18, 2008
7. Shiloh Methodist Church
Side view of church
of form and materials, as well as its strikingly rural and pastoral setting, has been preserved for more than 175 years.

Tradition has it that prior to construction of its first permanent church the congregation met as a coup as early as 1786 in a nearby brush arbor and later in camp meetings. The first preachers at the camp meetings were Revs. John Mason and Thomas Davis, assigned to the Broad River Circuit (including current Cherokee, Chester, Fairfield, Greenville, Newberry, Spartanburg, Union, and York Counties in 1787.

Shiloh was part of the Broad River Circuit 1785-1802, the Saluda Circuit 1802-1805 and the Enoree Circuit 1805-1833. The original sanctuary built on this site was of hand-hewn logs. After this building burned, the present sanctuary was constructed to replace it.

The three-acre site, which the deed describes as "Shiloh meeting house on Lawson Fork," was donated to the congregation through its trustees by Adam Gramling, Jr., in 1836. Trustees during the 1830s soon after this church was built, included William Blackburn, William Brooks, Enoch Duncan, Walter Farrow, Adam Gramling, Sr., John Gramling, Ruben Gramling, Hosea Kennedy, and Asa Waldrop.

Shiloh Methodist Church was a circuit church for most of its existence, dependant on a minister traveling circuit to preach at several churches. About 1915, the last fourteen members 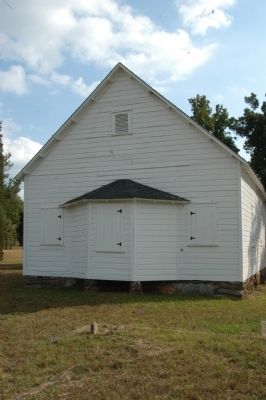 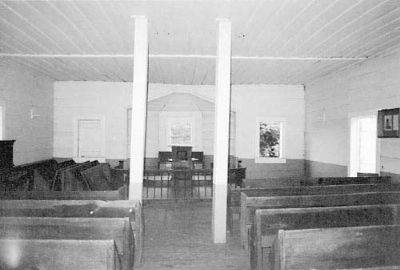 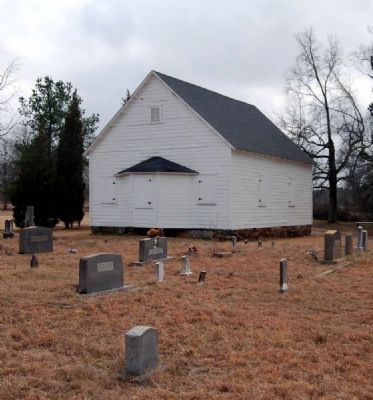 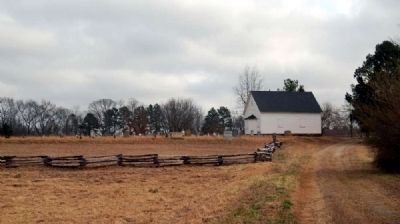 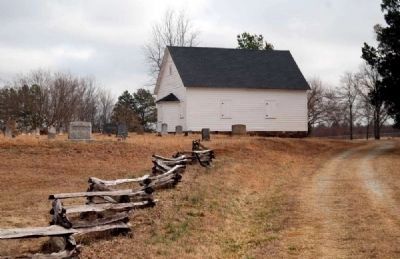 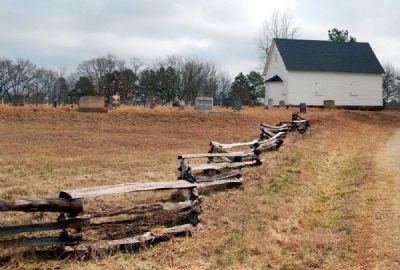 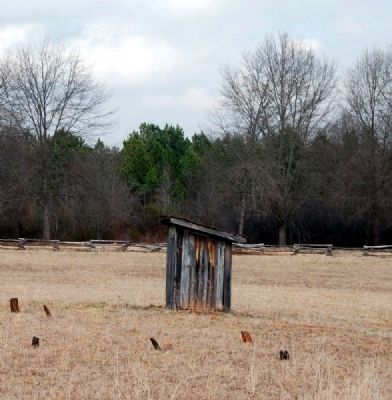 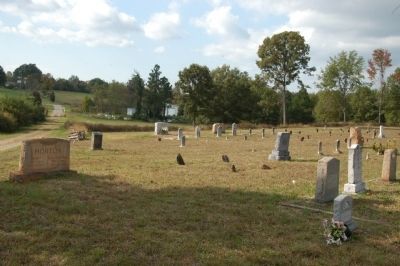 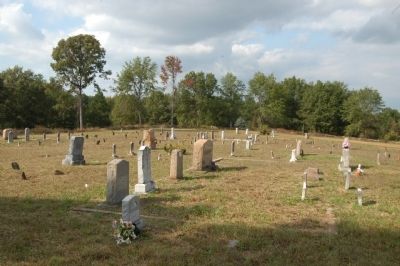 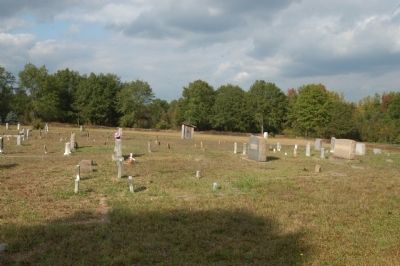 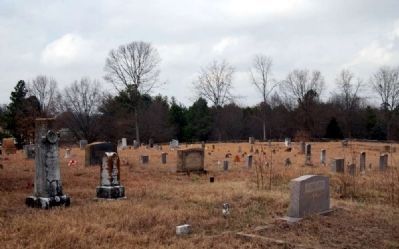