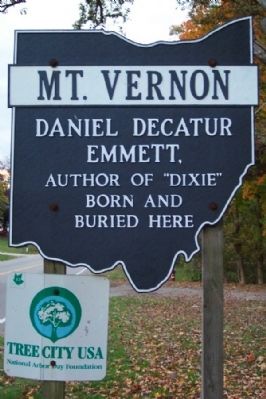 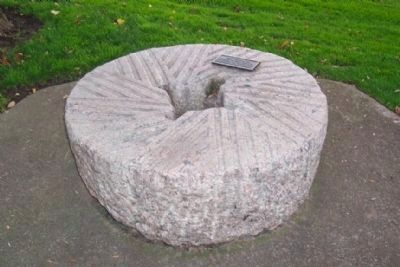 Additional commentary.
1. Regarding the Samuel Thatcher Mill Milstone
Gilman Bryant built the first successful mill on Dry Creek, near the present site of the county infirmary. In 1824 he built a saw-mill, and in 1825 erected a grist-mill. John Wilson built a corn cracker at the Proper place in 1829, and Albertus Bird built a saw-mill in 1832 on the property now occupied by Harman Hollister. In 1827 Samuel Thatcher, Sr. built a saw-mill on the north fork of Dry Creek, one and a half miles north of Mt. Liberty, and in 1839 he built a carding-mill on the south fork, one half mile west of the present site of Mt. Liberty. He conducted the latter about two years and then abandoned it. Mr. Thatcher seems to have had a mania for building mills for he shortly after built another saw mill just south of the village, and sold it to George Beardsheare. This mill is still standing. 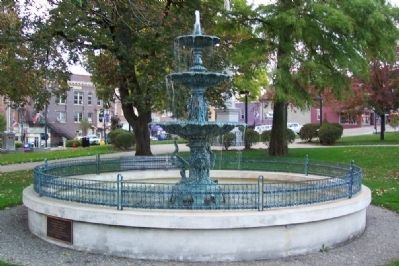 Photographed By William Fischer, Jr.
3. Cooper Fountain dates to 1883
The restoration of this fountain is dedicated in memory of Beatty B. Williams in recognition of his outstanding contribution to the Mount Vernon community October, 1991
saw- and grist-mill was built by Mr. Thatcher in 1847, on the north side of the creek just below Mt. Liberty, and sold to Mr. John Inscho. John D. Higgins subsequently purchased this mill and turned it into a barn, and in 1865 it was burnt. In 1862 two steam saw-mills were run in the village by Youngblood & Weller, and Peter Shafer.

From: History of Knox County, Ohio, Its Past and Present, compiled by Norman Newell Hill and originally published by A.A. Graham & Co., 1881.