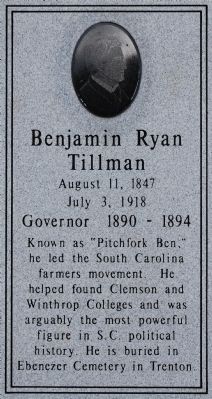 Photographed By Brian Scott, October 10, 2008
1. Benjamin Ryan Tillman Marker
Inscription.
Benjamin Ryan Tillman. August 11, 1847 - July 3, 1918.
Known as "Pitchfork Ben," he led the South Carolina farmer's movement. He helped found Clemson and Winthrop Colleges and was arguably the most powerful figure in S.C. political history. He is buried in Ebenezer Cemetery in Trenton.. . This historical marker is in Edgefield in Edgefield County South Carolina

Known as "Pitchfork Ben,"
he led the South Carolina
farmer's movement. He
helped found Clemson and
Winthrop Colleges and was
arguably the most powerful
figure in S.C. political
history. He is buried in
Ebenezer Cemetery in Trenton.

Other nearby markers. At least 10 other markers are within walking distance of this marker. John Gary Evans (within shouting distance of this marker); John Calhoun Sheppard (about 500 feet away, measured in a direct line); James Strom Thurmond (about 700 feet away); Milledge Luke Bonham (approx. ¼ mile away); Francis Wilkinson Pickens (approx. 0.3 miles away); James Henry Hammond 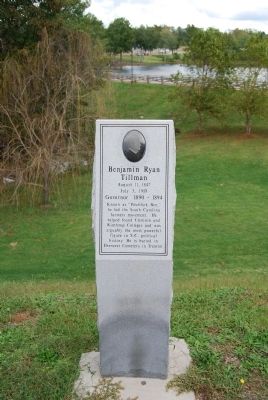 More about this marker. This marker is the eighth along the Ten Governor's Trail, a converted railroad bed that has been paved. There are markers to each of the 10 governors placed every 0.9 of a mile. 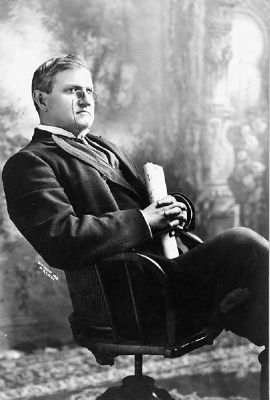 Photographed By Wikipedia
3. Benjamin Ryan Tillman
(1847-1918)
Governor of S.C. 1890-1894
U.S. Senator from S.C. 1895–1918
the Confederate Army, but was stricken with a severe illness; engaged in agricultural pursuits; Governor of South Carolina 1890-1894; established Clemson College and Winthrop College while Governor; member of the State constitutional convention in 1895; elected as a Democrat to the United States Senate in 1894; reelected in 1901, 1907 and 1913 and served from March 4, 1895, until his death; censured by the Senate in 1902 after assaulting another Senator on the Senate floor; chairman, Committee on Revolutionary Claims (Fifty-seventh through Fifty-ninth Congresses), Committee on Five Civilized Tribes of Indians (Sixty-first and Sixty-second Congresses), Committee on Naval Affairs (Sixty-third through Sixty-fifth Congresses); Tillman was known as “Pitchfork Ben” during his years in the Senate; died in Washington, D.C., July 3, 1918; interment in Ebenezer Cemetery, Trenton, S.C. (Source: Biographical Directory of the U.S. Congress.)
— Submitted January 2, 2010, by Brian Scott of Anderson, South Carolina.
2. Tillman Quotes
Despite his "honored" state among South Carolina politicians (as well as having Tillman Hall on the campuses of Winthrop and Clemson Universities and Tillman County, Oklahoma named for him), Tillman was no doubt a racist by modern standards. The following 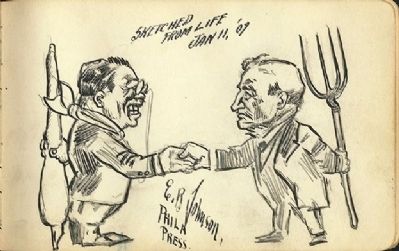 Photographed By E.R. Johnson, Philadelphia Press, January 11, 1909
4. Theodore Roosevelt with Benjamin "Pitchfork Ben" Tillman
quotes came from a speech he delivered in 1990 on the floor of the U.S. Senate:

"We have done our level best [to prevent blacks from voting]...we have scratched our heads to find out how we could eliminate the last one of them. We stuffed ballot boxes. We shot them. We are not ashamed of it." - On allowing African Americans to vote

"We of the South have never recognized the right of the negro to govern white men, and we never will. We have never believed him to be the equal of the white man, and we will not submit to his gratifying his lust on our wives and daughters without lynching him. I would to God the last one of them was in Africa and that none of them had ever been brought to our shores." - On recognizing equality among the races

"...the negro is as contented and as prosperous and as well protected in South Carolina to-day as in any State of the Union south of the Potomac. He is not meddling with politics, for he found that the more he meddled with them the worse off he got." - On African Americans and politics

His racism was not confined to former slaves. In discussing America's weak financial status, Tillman said, "Great God, that this proud government, the richest, most powerful on the globe, should have been brought to so low a pass that a London Jew should have been appointed its receiver to have charge of the treasury." 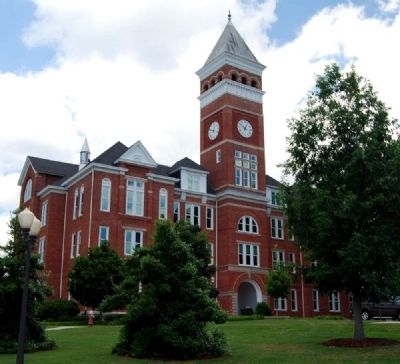 Photographed By Brian Scott
5. Tillman Hall
Clemson University Historic District #1
Named for Gov. Tillman
— Submitted October 24, 2008, by Brian Scott of Anderson, South Carolina.
3. Key Events
• Tillman became seriously ill after leaving school to join the Confederate States Army, resulting in the loss of his left eye - 1864. He never actually served during the war.
• 1890 – Governor Tillman, having never held a government office prior to being elected governor, was elected by the voters in South Carolina 80% to 20%.
• December 11, 1890 – U.S. Senators Wade Hampton and John L.M. Irby were replaced Governor Tillman's supporters.
• February 18, 1891 – The first issue of the anti-Tillman newspaper The State was published under the editorial control of N.G. Gonzales.
• 1892 - Tillman ran unopposed and was elected for his second term. In December, the General assembly passed legislation that created the Dispensary system for distributing liquor in South Carolina, thus giving the state a monopoly on liquor sales.
• 1893 – Clemson Agricultural and Mechanical College (now Clemson University) admitted its first students. Tillman solidified his control when The last of the justices appointed by Wade Hampton were replaced with appointees of the Tillman.
• 1894 – Governor Tillman was the keynote speaker at the laying of the cornerstone for the Winthrop Normal and Industrial School of South Carolina (now Winthrop University).
• March 30, 1894 – Citizens in Darlington rioted after liquor Dispensary constables fired a shot into a crowd, killing a bystander
• March-April 1894 – Governor Tillman called the militia to restore order, but companies from Charleston, Columbia, Manning, and Sumter refused to answer the call.
• 1895 - Tillman presided over a state convention which resulted in a new South Carolina constitution. The driving force for this new document was the fear among many of the white leaders of the growing political power of African Americans. The new state constitution was superficially drawn up to disenfranchise African Americans. It is this constitution which still governs South Carolina, although most of the racially motivated laws have been removed either by court decision (school segregation) or popular vote (ban on inter-racial marriages). Later that year, Tillman was elected to the first of his five senate terms.
• 1902 - Tillman was censured while serving in the U.S. Senate for assaulting fellow Senator from South Carolina John L. McLaurin in the US Senate chamber.
— Submitted October 24, 2008, by Brian Scott of Anderson, South Carolina.
Credits. This page was last revised on November 30, 2020. It was originally submitted on October 24, 2008, by Brian Scott of Anderson, South Carolina. This page has been viewed 4,980 times since then and 54 times this year. Photos:   1, 2, 3, 4. submitted on October 24, 2008, by Brian Scott of Anderson, South Carolina.   5. submitted on July 7, 2009, by Brian Scott of Anderson, South Carolina.
Share this page.