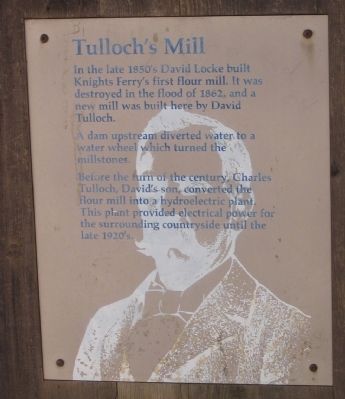 Photographed By Syd Whittle, February 23, 2007
1. Tulloch’s Mill Marker
Inscription.
Tulloch’s Mill. . , In the late 1850’s David Loche built Knights Ferry’s first flour mill. It was destroyed by the flood of 1862, and a second new mill was built here by David Tulloch., A dam upstream diverted water to a water wheel which turned the millstones., Before the turn of the century, Charles Tulloch, David’s son, converted the flour mill into a hydroelectric plant. This plant provided electrical power for the surrounding countryside until the late 1920’s. . This historical marker is in Knights Ferry in Stanislaus County California

In the late 1850’s David Loche built Knights Ferry’s first flour mill. It was destroyed by the flood of 1862, and a second new mill was built here by David Tulloch.

A dam upstream diverted water to a water wheel which turned the millstones.

Before the turn of the century, Charles Tulloch, David’s son, converted the flour mill into a hydroelectric plant. This plant provided electrical power for the surrounding countryside until the late 1920’s.

Topics. This historical marker is listed in these topic lists: Industry & Commerce • Settlements & Settlers • Waterways & Vessels. A significant historical year for this entry is 1862. 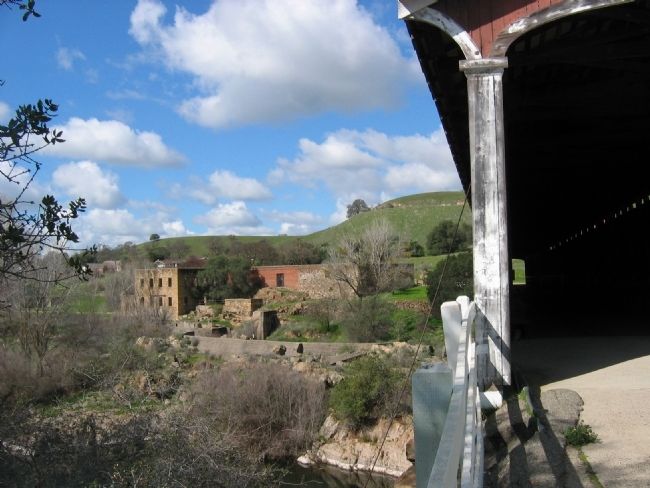 2. Knights Ferry. California Gold Country Website entry:
On November 9 of 1849, William Knight was killed in the streets of the town he founded, gunned down by a man whose name is now lost to history. James G. Fair was in town the day it happened. He called it, “one of the most cold-blooded murders” he had ever witnessed. Knight was buried where he fell, in front of the Masonic Hall, on a low hill overlooking the plaza. (Submitted on October 24, 2008, by Syd Whittle of Mesa, Arizona.) 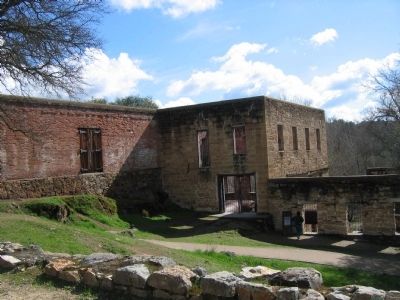 Photographed By Syd Whittle, February 23, 2007
3. Tulloch’s Mill
Chief Engineer, Oakdale Irrigation District
The name "Tulloch", as given to the Tulloch Reservoir Project of Oakdale and South San Joaquin Irrigation Districts, was in memory of one of the early day families who came to California during the mining era and played a prominent part in the history of the town of Knight's Ferry and vicinity.
According to historical records, one David Tulloch and family emigrated to California during the early 1850's and settled in Knights Ferry which was then the center of extensive placer gold mining operations along the Stanislaus River.
This Mr. Tulloch, father of Charles T. Tulloch, was active in various business enterprises rather than just mining. Among these activities was the building of the first flour mill to be operated in Stanislaus County. This mill, which was located immediately below the existing Knight's Ferry covered bridge, was operated by water wheel power from a nearby river diversion dam. The mill operated under the name of Stanislaus Milling Company and functioned for some thirty years until the latter 1890's.
The son, Charles T. Tulloch, finally inherited the milling business and also became quite prominent in various developments about Knights Ferry. As the mining operations closed and the failing business became unprofitable due to competition, he acquired the so-called old "Knights Ferry Ditch". This 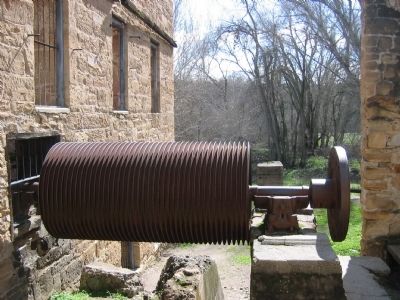 Photographed By Syd Whittle, February 23, 2007
4. Remnant's of the Power Generator
ditch was used by the early miners for diverting water from the Stanislaus River some six miles upstream near Six Mile Bar for placer mining and domestic purposes.
Charles T. Tulloch also being a man of vision, proceeded to exploit the old ditch with its valuable water rights (some extending back to 1853) by constructing a hydro-electric power plant of some 600 K. W. (D.C.) capacity adjacent to the old flour mill building. This plant furnished the first electric energy used in the City of Modesto and for copper mining operations at Copperopolis.
In 1902, Mr. Tulloch did considerable betterment work on the old Knights Ferry ditch in order to insure power production and furnish water to the growing agricultural development about the Knights Ferry area. The outstanding betterment work was the construction of a new diversion dam on the river at a location immediately above Six Mile Bar. This dam, which is now known as the "Old Tulloch Dam ", was some 300 feet in length and around eight feet in height and very substantially built of heavy rock fitted together with cement mortar. It is claimed that the cement used in laying up the rubble masonry was shipped from Holland by sailing vessels around Cape Horn to San Francisco and thence hauled by freight team to the dam site. This dam remains today practically intact as a tribute to its skillful and lasting construction.
Over 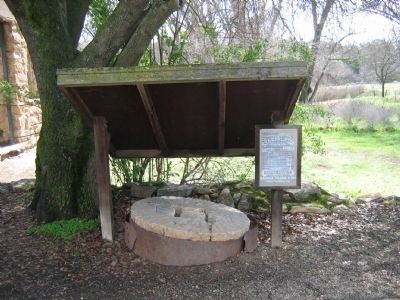 Photographed By Syd Whittle, February 23, 2007
5. Mill Stones
The first flour mill, washed out in the 1862 flood, used two stones. In rebuilding the mill, David Tulloch ordered five sets of stones from Belgium, which were shipped around The Horn to San Francisco. The stones were about 4 feet in diameter. They were made of several pieces of granite cemented and bound together with iron hoops. The grinding surfaces of the stones were grooved and hand cut by European artisans. The remains of the millstones in front of you have been severely weathered by the acid from the oak tree overhead.
the years, Mr. Tulloch was forced out of the power business by reason of competition with the big power companies. He thereupon, extended his ditch system down into the valley to the Oakdale, Valley Home, and Escalon areas and began selling water to the farmers. It was this "taste of irrigation water" which sparked the organization of the Oakdale and South San Joaquin Irrigation Districts in 1909 and which culminated in the Districts purchasing the entire Tulloch system together with his valuable water rights for the sum of $650,000.
While the Districts, in their plan of development, constructed a new diversion dam on the river, known as the Goodwin Dam and abandoned the Old Tulloch Dam, much of Tulloch's ditch system is still in active use. Finally, when explorations were going on for the Tri-Dam Project and it had been determined that the most desirable dam site for the lower reservoir unit was located only some 800 feet upstream from the Old Tulloch Dam, the Districts' Boards of Directors decided that it would be altogether proper that this big dam should be named "Tulloch Dam" and the reservoir, thus formed, called the "Tulloch Reservoir" in lasting memory of the Tulloch family and particularly to Charles T. Tulloch who had contributed so much toward pioneering irrigation and power development in the area.
Source: Old Corner.com 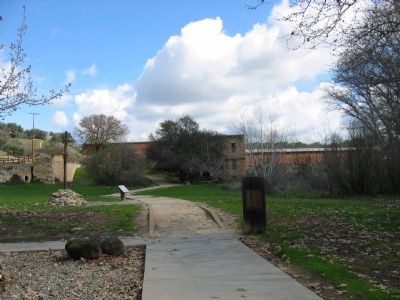 Photographed By Syd Whittle, February 23, 2007
6. Tulloch’s Mill Site with Knights Ferry Covered Bridge in Background
— Submitted October 24, 2008.
2. I have pictures and Charles Tulloch;s travel trunk
not sure if there is any family lineage; however, I have about 200 photos/portraits taken from the early 1900's from Stockton and Oakdale...I have a ledger dated 1902 with handwritten entries of monies going in and out (of the mill?)...and I have a a travel trunk with Charles Tulloch's name on it...if of any interest, please write to me at cpanzanaro@aol.com
— Submitted May 2, 2011. 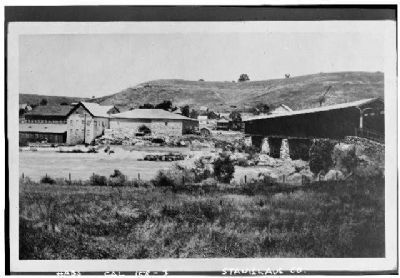