First Constitution of the Province of New Jersey 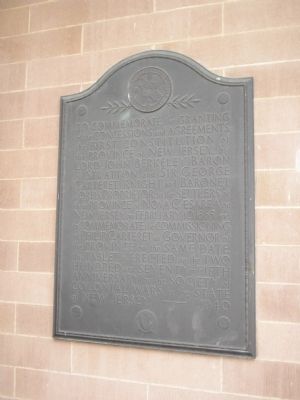 To commemorate the granting of the Concessions and Agreements, the first Constitution of the Province of New Jersey by Lord John Berkeley, Baron of Stratton, and Sir George Carteret, Knight and Baronet Lords Proprietor to the Settlers of their Province of Nova Caesarea or New Jersey on February 10, 1665, and to commemorate the commissioning of Philip Carteret as governor of the province on the same date, this tablet is erected on the two hundred and seventy-fifth anniversary by the Society of Colonial Wars in the State of New Jersey. ------ 1940

Erected 1940 by Society of Colonial Wars in the State of New Jersey.

Topics. This historical marker is listed in this topic list: Colonial Era. A significant historical month for this entry is February 1914.

Location. 40° 44.423′ N, 74° 10.156′ W. Marker is in Newark, New Jersey, in Essex County. Marker is at the intersection of Broad Street and Rector Street, on the left when traveling south on Broad Street. Touch for map. Marker is in this post office area: Newark NJ 07104, United States of America. Touch for directions.

Other nearby markers. At least 8 other markers are within walking distance of this marker. Washington Passed Beneath this Tower (here, next to this marker); Historic Site 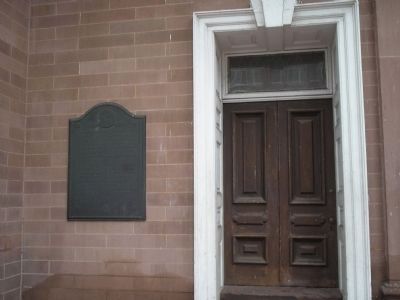 Photographed By Bill Coughlin, October 25, 2008
2. Marker on Broad Street
Marker can be seen in the photo to the left of the doorway at Trinity Church. 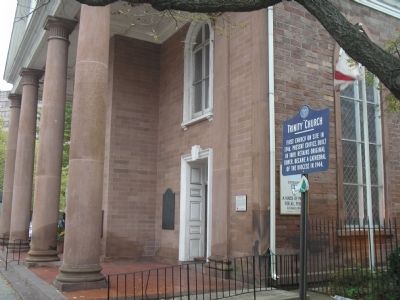 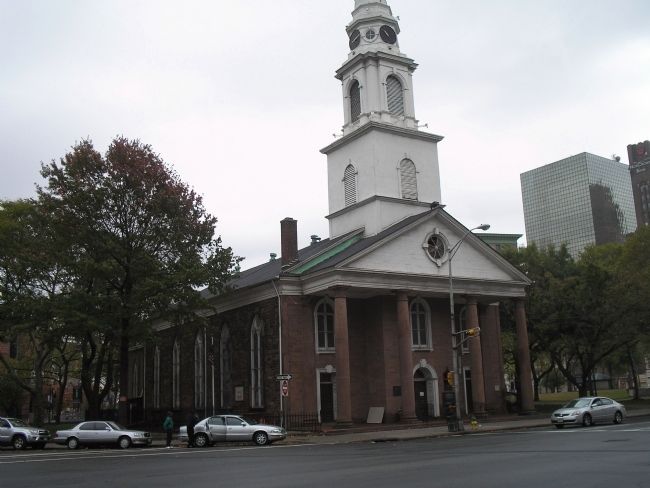