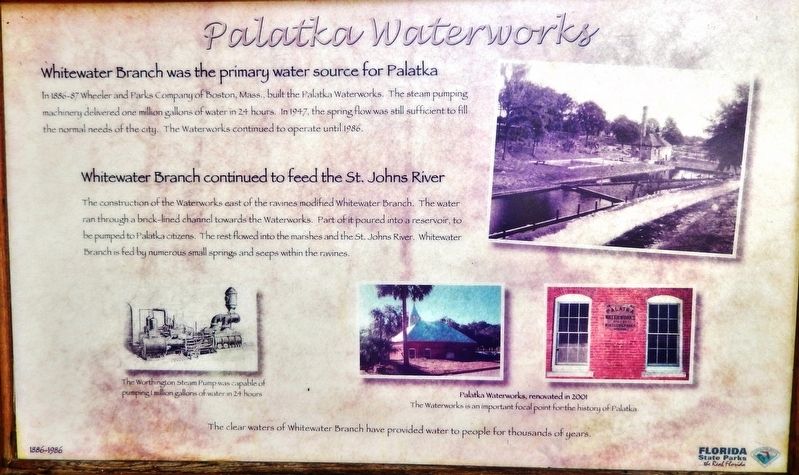 Whitewater Branch was the primary water source for Palatka
In 1886-87 Wheeler and Parks Company of Boston, Mass., built the Palatka Waterworks. The steam pumping machinery delivered one million gallons of water in 24 hours. In 1947, the spring flow was still sufficient to fill the normal needs of the city. The Waterworks continued to operate until 1986.

The clear waters of Whitewater Branch have provided water to people for thousands of years.

(photo captions)
• The Worthington Steam Pump was capable of pumping 1 million gallons of water in 24 hours.
• Palatka Waterworks, renovated in 2001. The Waterworks is an important focal point for the history of Palatka.

Topics. This historical marker is listed in these topic lists: Charity & Public Work • Natural Resources • Waterways & Vessels. A significant historical year for this entry is 1886.

Location. 29° 38.013′ N, 81° 38.554′ W. Marker is in Palatka, Florida, in Putnam County. Marker can be reached from Twigg Street east of South 18th Street, on the right when traveling east. Marker is located within Ravine Gardens State Park, along the gardens loop road, near the old Palatka Waterworks. Touch for map. Marker is at or near this postal address: 1600 Twigg Street, Palatka FL 32177, United States of America. Touch for directions.

More about this marker. This is a large, rectangular, composite marker, mounted at eye-level in a heavy-duty wooden frame kiosk. 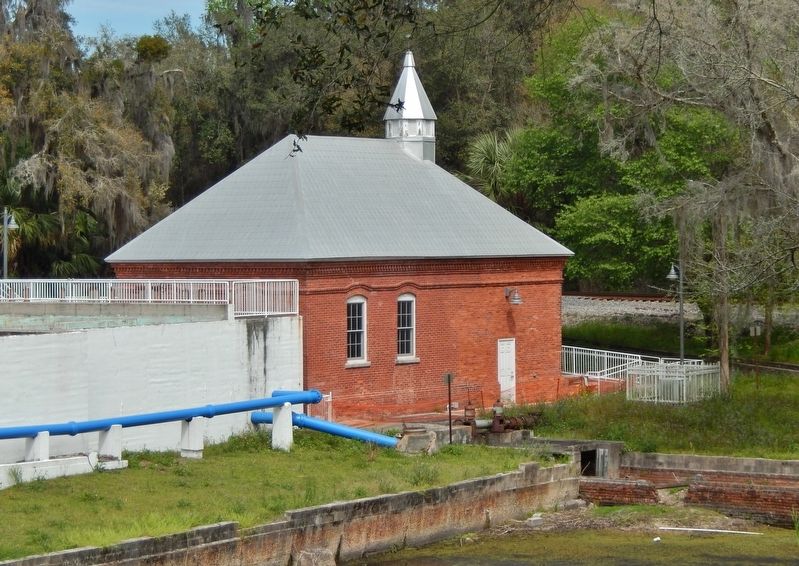 By Cosmos Mariner, March 11, 2014
3. Palatka Waterworks Building (view from Ravine Gardens trail, near marker)
fire protection. When it was closed, the building and grounds fell into disrepair. In 1999, a grant was acquired to repair the roof and re-point the outside brickwork. With additional donations from many area businesses, organizations, and individuals, the first phase of restoration was accomplished in 2002. (Submitted on February 19, 2019, by Cosmos Mariner of Cape Canaveral, Florida.) 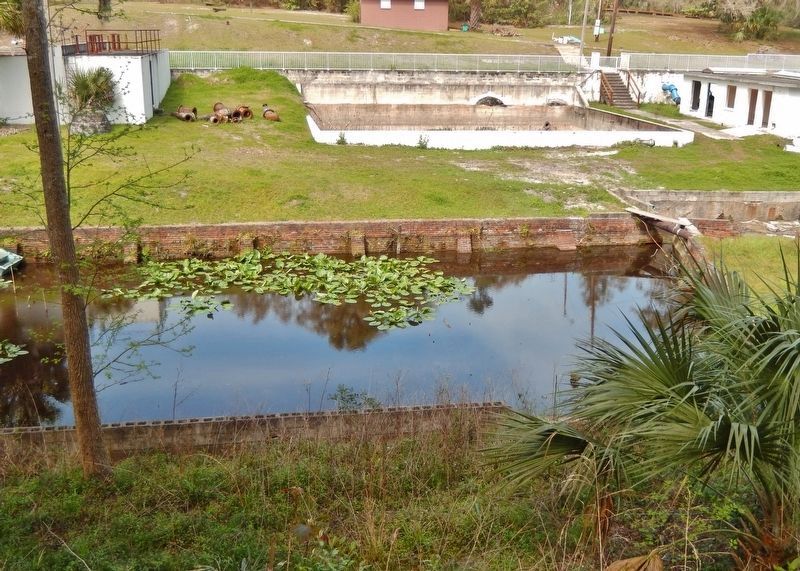 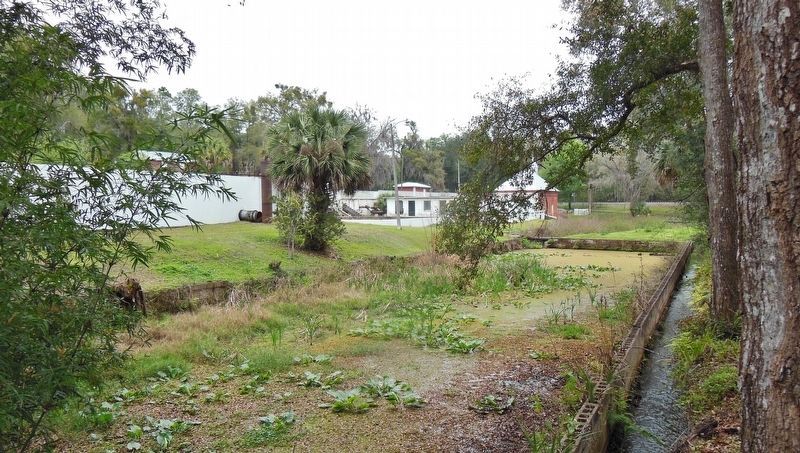 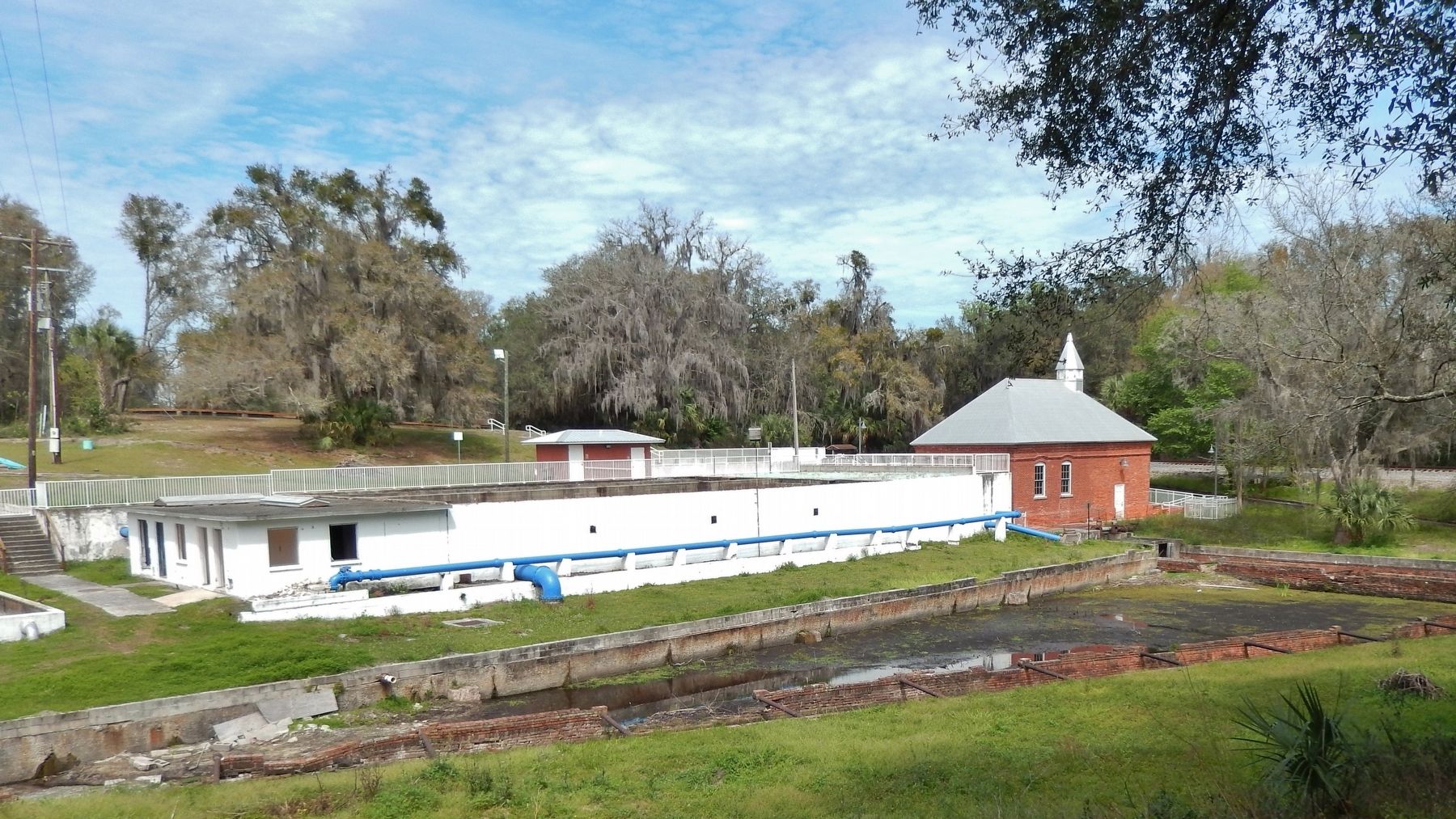