Site of the Western Penitentiary 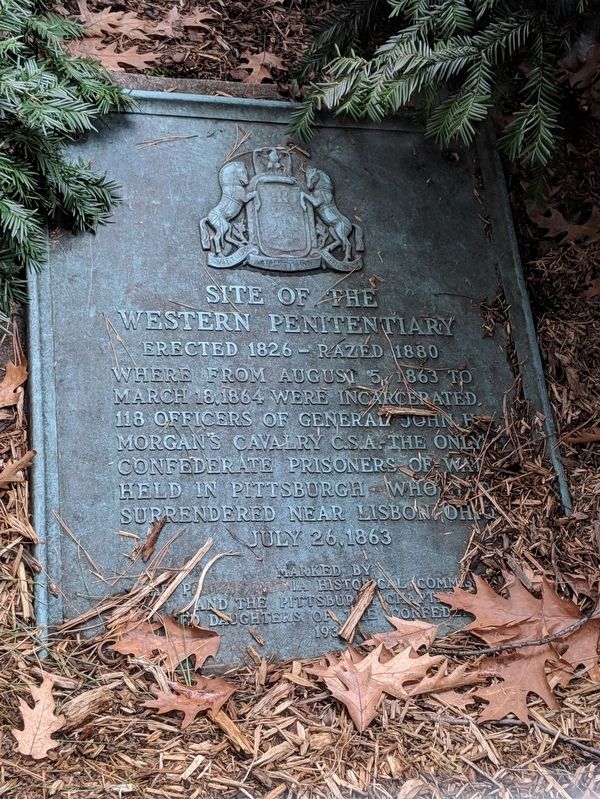 Photographed By Mike Wintermantel, February 24, 2019
1. Site of the Western Penitentiary Marker
Inscription.
Site of the Western Penitentiary. . Erected 1826. Razed 1880. , Where August 5, 1863 to March 18, 1864, were incarcerated 118 officers of General John H. Morgan's cavalry, C.S.A. the only Confederate prisoners of war held in Pittsburgh who had surrendered near Lisbon, Ohio, July 26, 1863. . This historical marker was erected in 1931 by The Pennsylvania Historical Commission and the Pittsburgh Chapter United Daughters of the Confederacy. It is in Pittsburgh in Allegheny County Pennsylvania

Erected 1931 by The Pennsylvania Historical Commission and the Pittsburgh Chapter United Daughters of the Confederacy.

Topics. This historical marker is listed in this topic list: War, US Civil. A significant historical date for this entry is March 18, 1864.

Location. 40° 27.189′ N, 80° 0.59′ W. Marker is in Pittsburgh, Pennsylvania, in Allegheny County. Located in the Eagle enclosure at the National Aviary, North Side, Pittsburgh (mounted on shallow stone mount on the ground).
Must pay admission to National Aviary to view marker. Touch for map. Marker is at or near this postal address: 700 Arch Street, Pittsburgh PA 15212, United States of America. Touch for directions. 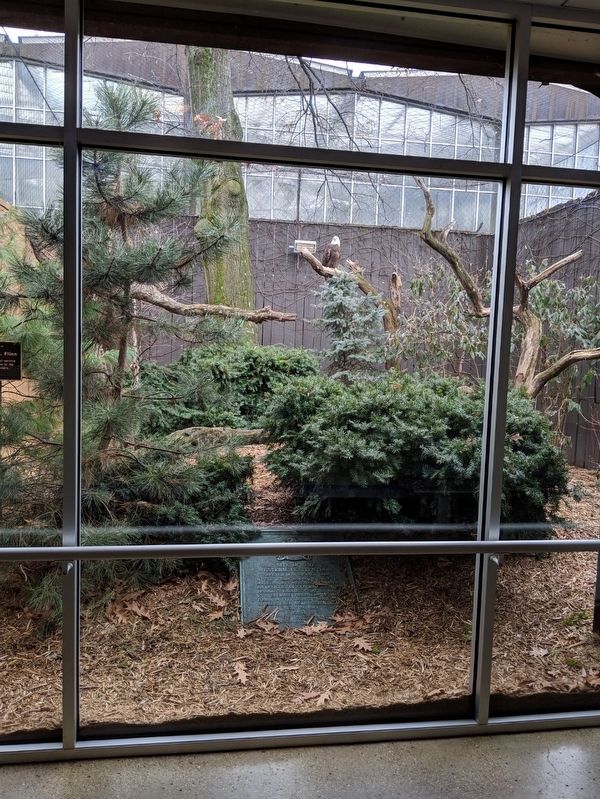 Photographed By Mike Wintermantel, February 24, 2019
2. Site of the Western Penitentiary Marker
Being closely watched over by an American Bald Eagle

Additional commentary.
1. Marker to be removed.
The Pennsylvania Historical and Museum Commission, responsible for Pennsylvania's historical markers, began a Diversity, Equity, Inclusion and Access (DEIA) review of its markers. The Commission decided to remove this marker because it referenced the facility was once used to house Confederate prisoners during the Civil War.
— Submitted October 29, 2021, by Mark Hilton of Montgomery, Alabama.
Credits. This page was last revised on October 29, 2021. It was originally submitted on February 24, 2019, by Mike Wintermantel of Pittsburgh, Pennsylvania. This page has been viewed 282 times since then and 52 times this year. Photos:   1, 2. submitted on February 24, 2019, by Mike Wintermantel of Pittsburgh, Pennsylvania.
Share this page.