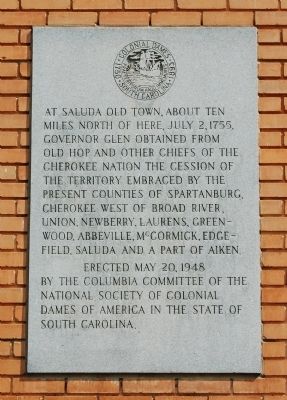 Photographed By Brian Scott, October 18, 2008
1. At Old Saluda Town... Marker
Inscription.
At Old Saluda Town.... .
At Old Saluda Town, about ten miles north of here, July 2, 1755, Governor Glen obtained from Old Hop and other chiefs of the Cherokee Nation the cession of the territory embraced by the present counties of Spartanburg, Cherokee west of Broad River, Union, Newberry, Laurens, Greenwood, Abbeville, McCormick, Edgefield, Saluda and a part of Aiken.. . This historical marker was erected in 1948 by Columbia Committee, National Society of Colonial Dames of America, South Carolina. It is in Saluda in Saluda County South Carolina

At Old Saluda Town, about ten
miles north of here, July 2, 1755,
Governor Glen obtained from
Old Hop and other chiefs of the
Cherokee Nation the cession of
the territory embraced by the
present counties of Spartanburg,
Cherokee west of Broad River,
Union, Newberry, Laurens, Greenwood,
Abbeville, McCormick, Edgefield,
Saluda and a part of Aiken.

Topics and series. This historical marker is listed in these topic lists: Native Americans • Settlements & Settlers. In addition, it is included in the The Colonial Dames of America, National Society of series list. A significant historical month for this entry is July 1924.

Other nearby markers. At least 10 other markers are within walking distance 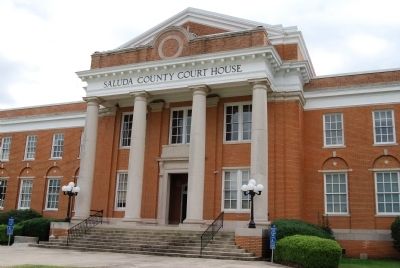 Photographed By Brian Scott, October 18, 2008
2. Saluda County Courthouse
The marker is located on the west side of the building.

Also see . . .
1. Saluda Old Town Site. South Carolina Department of Archives and History website entry:
This is an important site with a background of several significant occupations extending from prehistoric to historic times. (Submitted on December 26, 2010, by Brian Scott of Anderson, South Carolina.) 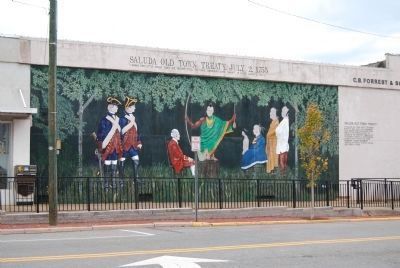 5. Biography of Governor James Glen. Gazetteer of Scotland website entry:
American governor. Born in Linlithgow (West Lothian), Glen served for a time as an excise inspector before studying law at the university in Leiden. (Submitted on March 13, 2009, by Brian Scott of Anderson, South Carolina.)

6. Kanagatucko. Kanagatucko, known in English as Old Hop, (the Cherokee translates as "Stalking Turkey"), was a Cherokee elder, serving briefly as the First Beloved Man of the Cherokee from 1753 until his death in 1760. (Submitted on December 26, 2010, by Brian Scott of Anderson, South Carolina.)

Additional commentary.
1. James Glenn
James Glen, it will be recollected, had been appointed Governor on the 23rd of December, 1738; but though frequent announcements were made in England that he was about to sail, but he did not actually arrive in the province until the 19th of December 1743. James Glen was born at Linleithgow, Scotland, in 1701, and was educated at the 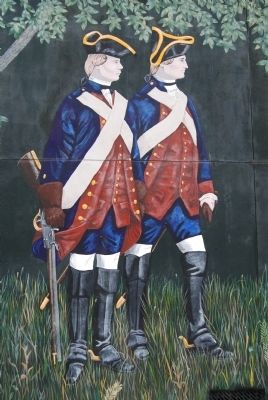 Photographed By Brian Scott, October 18, 2008
4. Mural Detail - English Troops
University of Leyden. In 1722 he inherited from his father two estates, Bonnington and Longcroft. He belonged to a set of young Scotchmen who held political office in London and in America. He himself was Inspector of Seigniories in Scotland, and retained that office for several years after his appointment to the governorship of South Carolina. The Gazette of the 21st thus announces his coming:

Last Saturday arrived here in the Tartar man-of-war, commanded by Captain Ward, his Excellency, James Glen, Governor and Commander-in-Chief of the Province and Vice Admiral of the same. Upon the signal of five guns being discharged from Fort Johnson, the Charlestown Regiment was drawn up under arms upon the Bay, extending in two lines facing one another from the Council Chamber and Gibb's wharf. His Excellency, in passing by Fort Johnson, was saluted by the guns of that fort; when the ship came before the town by the guns also at Granville's, Craven's, and Broughton's batteries. As soon as she came to anchor the Clerk of the Council and master in the Chancery, having been first sent on board to wait on his Excellency and to show him a proper place of landing, he was received by the Honorable Edward Atkin and Charles Pinckney, Esquires, as members of his Majesty's Council, who conducted his Excellency through the two lines of foot to the Council Chamber, to his Honor, the 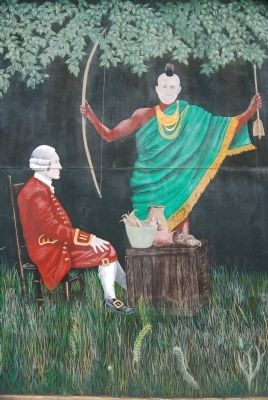 Photographed By Brian Scott, October 18, 2008
5. Mural Detail -
Colonial Governor James Glen
and Cherokee Chief Old Hop
Lieutenant Governor, attended by the rest of the members of the Council then on the spot.

On the same day Governor Glen issued his proclamation, assuming administration of the government. Hewatt describes Governor glen as a man of considerable knowledge, courteous and polite, exceedingly fond of military parade and ostentation. He did not, however, bring with him to his office a reputation which would have favorably predisposed the province to his administration. Indeed, the "Traders of South Carolina," upon seeing the paragraph in the newspapers announcing his appointment, addressed the Duke of Newcastle a paper, intimating that they were afraid that he was wanting in ability and experience, and hoping that his Grave would not be guided by the mere recommendations of friends, but would fully investigate the merits and qualifications of a person before ratifying him in an appointment of so much importance. Governor Glen's appointment, as Hewatt says, was so far proper, as he possessed qualifications which rendered his government in the settled part of the province respectable, and the people living under it for several years happy and contented. Bus his conduct in regard to the Indians and the settlement of the upper part of the province, which during his administration was to become the chief executive business, has been severely criticised. indeed, Adair, a sufficiently 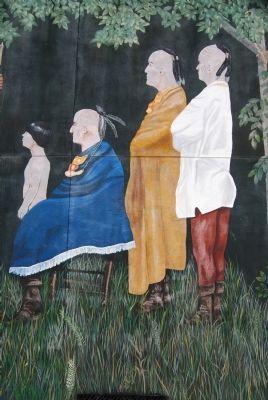 Photographed By Brian Scott, October 18, 2008
6. Mural Detail - Cherokee Chief
Witnessing the Treaty
intellectual though not altogether disinterested contemporary, Logan observes, does not hesitate to charge him with the deliberate sacrifice of the public interest to the promotion of his own private aggrandizement, but in what particulars is not stated. Governor Glen's administration is nevertheless indissolubly associated with the beginning of the era of prosperity to the province, and it was while he was Governor that a new chapter was opened in its history, its extent greatly enlarged, and another people added to its population. (Source: The History of South Carolina Under the Royal Government, 1719-1776 by Edward McCrady, pgs 250-251.)
— Submitted March 13, 2009, by Brian Scott of Anderson, South Carolina.
2. Governor James Glen
Governor James Glen stands out as Carolina governor between 1743 and 1756. His actions set the course of Carolina's Indian policy well beyond his long tenure. Glen, a student of history, diligently sought to apply its lessons, and his policies were footed in hope and fear centered on Cherokee Appalachia. Though he was to oversee a remarkable escalation in intensity of contact with the tribe, James Glen essentially continued the pattern of diplomacy and acted on the intercultural assumptions set during the post-Yamassee War period. Some of these assumptions proved at times to be hazardous. Glen's career as governor is important in this respect because it exemplifies, even personifies, the fragility of the political culture important by the mid-point in Glen's governorship. By then the first stirrings of the continental war for American empire between the English and French, a conflict which drew in the native peoples of America, were about to be felt in the South. For Glen, this slowly escalating conflict would provide a critical test of Carolina's geopolitical future. (Source: The Dividing Paths by Tom Hatley, pg 69.)
— Submitted March 13, 2009, by Brian Scott of Anderson, South Carolina.
3. Saluda Old Town Site
Saluda Old Town...is a small, oval, earthen mound about eight feet in height, measuring approximately 225 feet x 180 feet at the base with a relatively flat top measuring approximately 35 feet x 70 feet.

The entire site area is clear of trees and brush except for a few trees along fence lines and some small trees and brush on the top and east and south sides of the mound. Timber extends from the uplands down...

In prehistoric and early historic times this may not have looked much different than now. The open pasture may well have been cleared in prehistoric times to accommodate the village. The open pasture is fairly level with a few low places resulting...The mound has eroded some and was probably two or three feet higher when in use. Collectors have left some small "potholes" in the mound, but have not damaged it much.

Significance
This is an important site with a background of several significant occupations extending from prehistoric to historic times. The site has not been excavated nor has scientifically controlled testing been done there. Collectors have, however, recovered enough material in random "pot hunting" and surface collecting to identify the site in its aboriginal perspective.

Archaic projectile points have been recovered indicating an early occupation of 5,000 to 2,000 years ago. Pottery collected from the mound and from the pasture has included cord-making and complicated stamped pottery indicating middle to late prehistoric occupations. The predominant complicated stamped pottery indicates a large village of the Temple Mound Period of 1,000 to 400 years ago, centering on the low mound that remains and probably having a large open plaza surrounded by dwelling houses to the north and west of the mound.

Historic records refer to this as the site of a town of the Saluda Indians of the late 17th and early 18th century and as having been abandoned by 1712 when the Saludas moved north, eventually going as far as Pennsylvania.

The historic records also indicate this to be the site at which, on July 2, 1755, the Cherokee Chief Conocartee (Old Hop) signed a treaty with South Carolina Governor [James] Glen. The treaty recognized the sovereignty of the King of England over all Cherokee lands in South Carolina, 360,000 square miles. This later became Ninety Six District comprising ten counties. This recognition was in exchange for some $365.00 worth of presents from Governor Glen. This site, just off the Cherokee Trail, was chosen for the treaty because it was halfway between the principal Cherokee town of Keowee and Charleston. The meeting was held partially because the English were afraid the Cherokees would make a treaty with France. Governor Glen believed that this treaty would keep the Cherokees from abandoning the English after Braddock's defeat in the French and Indian War.