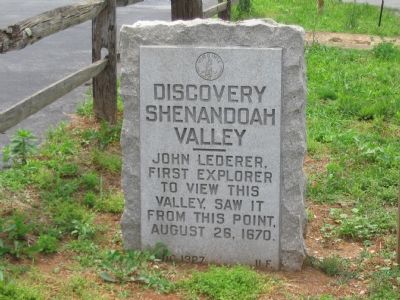 By Craig Swain, June 23, 2007
1. Discovery Shenandoah Valley Marker
Inscription.
Discovery Shenandoah Valley. . John Lederer, First explorer to view this valley, saw it from this point, August 26, 1670 . This historical marker was erected in 1927 by the State Conservation and Development Commission (SCDC). It is in Linden in Warren County Virginia

John Lederer, First explorer to view this valley, saw it from this point, August 26, 1670

Erected 1927 by the State Conservation and Development Commission (SCDC). 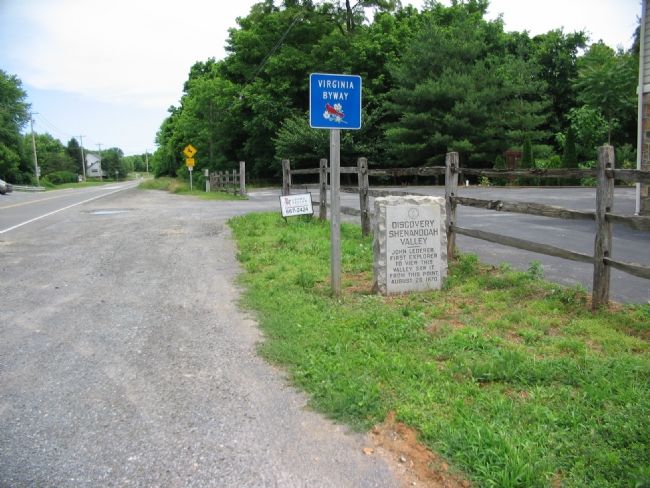 More about this marker. The Virginia State Conservation and Development Commission (SCDC) is an early predecessor to the Virginia Department Of Forestry. The SCDC was extensively involved in assuring the scenic forestry in Virginia would be maintained while establishing the Shenandoah National Park.

Regarding Discovery Shenandoah Valley. John Lederer made several expeditions into this part of Virginia looking for a passage to India or China. Historians place his passage at what we call Manassas Gap near where modern Interstate 66 and State Highway 55 pass through the Blue Ridge based on his writings.

Related markers. Click here for a list of markers that are related to this marker. Markers for John Lederer's Explorations.

Editor’s want-list for this marker. The editors have determined the organization with the initials SCDC, but have not been able to identify the “II F” • Can you help?
Share This Page.