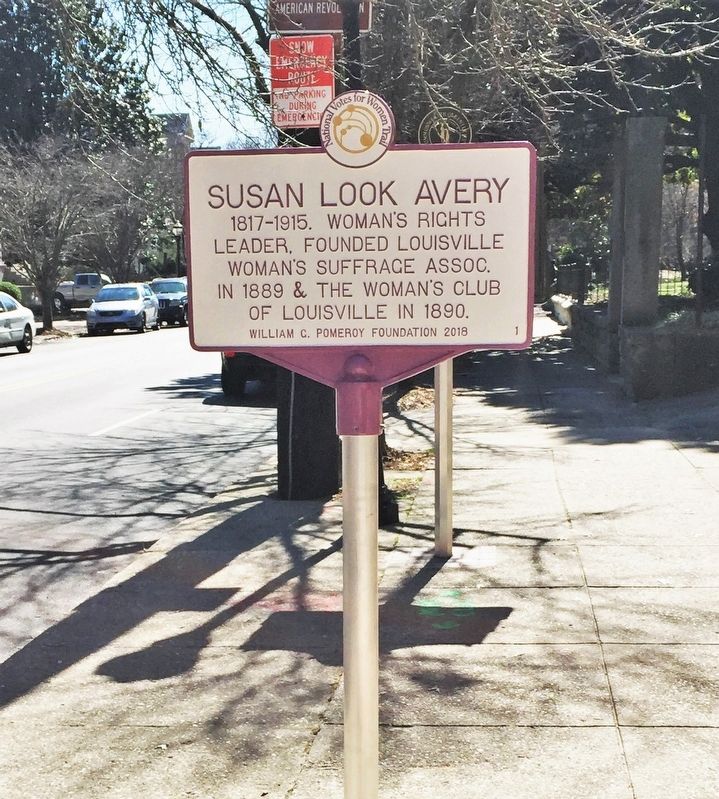 Topics and series. This historical marker is listed in these topic lists: Civil Rights • Women. In addition, it is included in the National Votes for Women Trail 🗳️, the William G. Pomeroy Foundation, and the Women's Suffrage 🗳️ series lists.

Also see . . .  Susan Look Avery (Wikipedia). "Susan Look Avery (October 27, 1817 – February 1, 1915), was a writer, suffragist, pacifist and supporter of temperance as well as a single tax. She hosted Lucy Stone and husband Henry Blackwell when they came to Louisville, Kentucky for the American Woman Suffrage Association meeting - the first suffrage convention in the South - in 1881. In 1890 she started the Woman's Club of Louisville, and in honor of her birthday, the suffrage club of Wyoming, New York, named itself after her." (Submitted on April 29, 2019.)
Credits. This page was last revised on April 29, 2019. It was originally submitted on April 25, 2019, by Deryn Pomeroy of Syracuse, New York. This page has been viewed 131 times since then and 13 times this year. Photo   1. submitted on April 25, 2019, by Deryn Pomeroy of Syracuse, New York. • Bill Pfingsten was the editor who published this page.
Share This Page.