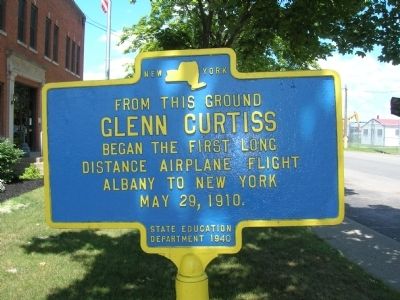 Topics. This historical marker is listed in this topic list: Air & Space. A significant historical month for this entry is May 1951. 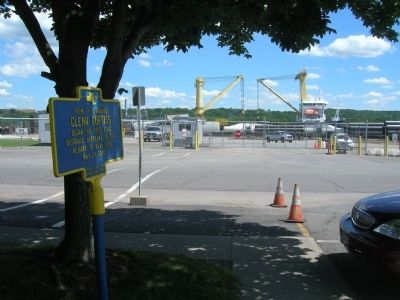 Photographed By Howard C. Ohlhous, July 15, 2008
2. Glenn Curtiss Flight Marker - Port of Albany
The Marker is in the shadows of the trees on the front lawn of the Port of Albany Administration Building. The onboard cranes of a ship docked on the Hudson River at the port can be see in the background.

Regarding Glenn Curtiss Flight. Glenn Hammond Curtiss (21 May 1878 – 23 July 1930) was an aviation pioneer and founder of the Curtiss Aeroplane and Motor Company (now part of Curtiss-Wright Corporation) and is considered "The Father of Naval Aviation." During World War I, the Curtiss Airplane and Motor Company was the largest aircraft manufacturer in the world, producing more than 10,000 aircraft (the equivalent of over 100 per day).

Curtiss was born 1878 in Hammondsport, New York near Keuka Lake, one of the Finger Lakes in upstate New York, where his insatiable curiosity, mechanical ability and ambition soon became evident. By the time he reached his teens, bicycles and speed had become a near-obsession with the young Curtiss. He was a champion bicycle racer for years and naturally progressed to designing and building his own machines. In 1903 he set a world speed record by averaging 64 mph for one mile, and in 1907 he set a new world record of 136.36 mph, on a 40-hp 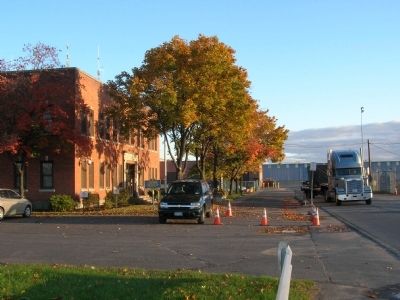 Photographed By Howard C. Ohlhous, October 17, 2008
3. Glenn Curtiss Flight Marker
The marker is to the left of the car parked near the center of the photo.
V8 powered motorcycle of his own design, which interestingly, lacked any brakes. At this time he was America's number one maker of high-performance motorcycles, and for many years Glenn Curtiss carried the title, "Fastest Man on Earth".

From high speed motorcycles his interests grew towards aviation after Thomas Baldwin, a showman and entrepreneur, who at the beginning of the 1900's specialized in balloon ascents and parachute descents. Baldwin adapted one of Curtiss' lightweight and powerful V-Twin motorcycle engines to what we would call it a blimp, creating the first successful dirigible in the United States.

On July 4th, 1908 Curtiss, who had been collaborating with Dr. Alexander Graham Bell and others in an effort to develop a power-driven airplane made a demonstration flight in Hammondsport under the auspices of the Aero Club of America, with the public, press, and accredited aeronautical experts present. Curtiss flew his boxkite-like airplane contraption named the June Bug a distance of almost a mile, swooping over vineyard stakes and barbed wire fences, 15 to 20 feet off the ground and landing in an open field. This flight won him the Scientific American trophy for the first public flight in America of one kilometer. Records show that because of this flight, he later received from the Aero Club of America, pilot’s license No.1, the first pilot’s license 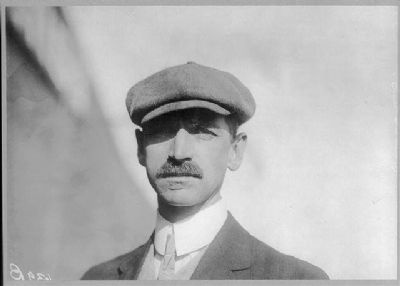 Library of Congress
4. Glenn Hammond Curtiss
granted in this country on June 8th 1911 (the Wrights were Nos. 4 and 5).

"The Hawk of the Skies" - Albany to New York Flight:

New York World publisher Joseph Pulitzer had issued an open challenge by offering a $10,000 prize for the first successful flight between Albany and New York City which fueled a great deal of hype about the flight. In the spring of 1910 Curtiss accepted that challenge. He rented a patch of land on Van Rensselaer Island near the Port of Albany for $5.00 to use as his takeoff area. Curtiss carried a handwritten note from Albany Mayor James Briggs McEwan to the mayor of New York City, William Jay Gaynor, allowing Curtiss to lay claim to delivering the first airmail in the country. Popular accounts of the day had dubbed the Curtiss biplane the Albany Flyer, but Curtiss called it the Hudson Flier. The plane was an early "pusher" design that was powered by a 50-hoursepower eight-cylinder engine turning a rear-mounted prop. It resembled a motorized box kite, with the elevator assembly in front, a narrow seat, a bar for a footrest and a simple steering wheel. For the historic flight, Curtiss wore a heavy sweater, goggles, rubber boots and a life preserver. The plane had sealed metal fuel tanks and five inflated bags for flotation in case he had to ditch the aircraft into the Hudson River. A watery forced landing befell 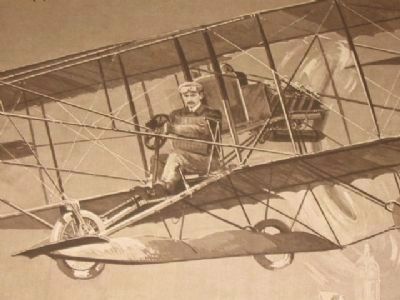 Collection of Steve Doherty
5. Curtiss Landing at Governor's Island
"Curtiss Landing at Governor's Island - Winning the World's $10,000 prize. May 29, 1910". Detail from a "Supplement to The World" newspaper.
airmen who attempted the feat during the Hudson-Fulton celebration of 1909. The New York Times chartered a New York Central train in Albany for an exclusive group of dignitaries, reporters and photographers who closely followed Curtiss on his flight down the Hudson River. During the flight Curtiss cruised at an average speed of 54 miles per hour and at an average altitude of 700 feet. He landed at a makeshift landing strip in Poughkeepsie to refill his plane's 10-gallon fuel tank. Later the plane's engine developed a serious oil leak so Curtiss set down on the broad lawn of a wealthy family's estate near Columbia University. He topped off the oil and gas, took off again, spun a victory lap around the Statue of Liberty, and landed at Governors Island before a cheering crowd. He had shattered the nation's flight endurance record of 24 miles and collected a payday that allowed Curtiss to keep his struggling airplane company afloat. It was a national event and a huge story that firmly established Curtiss as an American aviation pioneer. Afterwards Curtis was often referred to as "The Hawk of the Skies" in newspaper accounts.

In 1930 Glenn Hammond Curtiss was presented the Congressional Medal of Honor. In an anniversary flight he retraced his Albany to New York route of twenty years before. He passed away on July 23, 1930, in Buffalo, New York, from complications after appendix 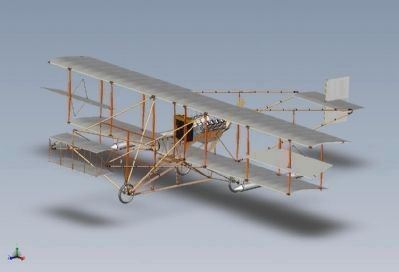 Photographed By Robert Juncosa, 2007
6. The Hudson Flier To Fly Again
This is an engineering model of the Curtiss "Hudson Flier". The drawing was created by engineer Robert Juncosa in his efforts to build a reproduction aircraft to be used to recreate the historic 1910 Curtis Flight.
surgery, and was buried in Pleasant Valley Cemetery in Hammondsport, New York, leaving behind a legacy for the benefit of the entire aviation community. He was inducted into the National Aviation Hall of Fame in 1964, the Motorsports Hall of Fame of America in 1990, and the Motorcycle Hall of Fame in 1998.

An engineer, pilot, and aviation buff from Rotterdam, New York, Steve Doherty, is designing a reproduction of the Curtiss "Hudson Flier" in the hopes of re-enacting the historic Glenn Curtiss flight from the Port of Albany to New York City on the 100th anniversary of the record-breaking endurance flight which took place in 1910. Doherty was inspired to recreate the Curtiss flight after reading a biography, "Glenn Curtiss: Pioneer of Flight", published in 1972 by Doubleday & Co. Doherty is working with the staff and volunteers of the Glenn H. Curtiss Museum in Hammondsport, New York to create a reproduction of the Hudson Flier using a vintage engine from the museum collection. Between trips from Rotterdam to Hammondsport to work on the reproduction plane Doherty has found time to help polish the Curtiss image with friends by stripping and repainting the weathered metal New York State historic marker dedicated to the historic 1910 Curtiss flight. 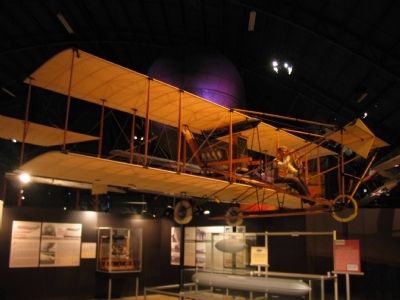 Photographed By Craig Swain, December 26, 2007
7. Curtiss 1911 Model D
One of Curtiss's first customers was the United States Army. The Army Signal Corps purchased its second aircraft from Curtiss (the first being a Wright flyer). The original was scrapped, but the U.S. Air Force Museum in Dayton Ohio built this reproduction to exacting standards using the original drawings.
to the memory of pioneer aviator, Glenn Curtiss, the museum contains a priceless collection relating to early aviation and local history. (Submitted on November 3, 2008, by Howard C. Ohlhous of Duanesburg, New York.)