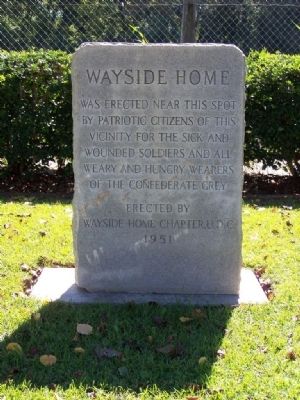 Photographed By Mike Stroud, 2008
1. The Wayside Home Marker
Inscription.
Wayside Home. .
Was erected near this spot by patriotic citizens of this vicinity for the sick and wounded soldiers and all weary and hungry wearers of the Confederate Grey. . This historical marker was erected in 1951 by Wayside Home Chapter, U.D.C.. It is in Millen in Jenkins County Georgia

Topics and series. This historical marker is listed in these topic lists: Charity & Public Work • War, US Civil. In addition, it is included in the United Daughters of the Confederacy series list. 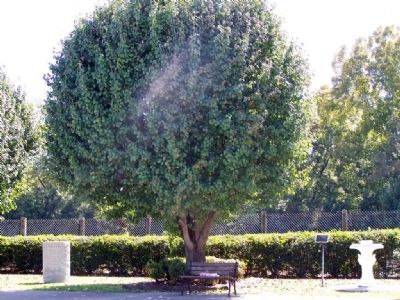 Regarding Wayside Home. Savannah [GA] Republican, May 26, 1863, p. 2, c. 2
"Millen Wayside Home.--The ladies of Burke county have completed their beautiful and patriotic arrangements at Millen, and are now dispensing their hospitality daily to large numbers of traveling soldiers. We dropped in a few evenings since and found a well supplied table and every comfort prepared for our brave defenders, the gentle hands that provided these benefactions rendering them doubly acceptable. We wish them every success in their praiseworthy undertaking, and as they rely on contributions and their own means alone for the support of their "Home," we hope the public will deal liberally with them. Will not the friends of the soldier in Savannah lend them a helping hand? We feel assured they are so disposed, and we would add that, to save them trouble, all contributions left at this office will be promptly acknowledged and forwarded."