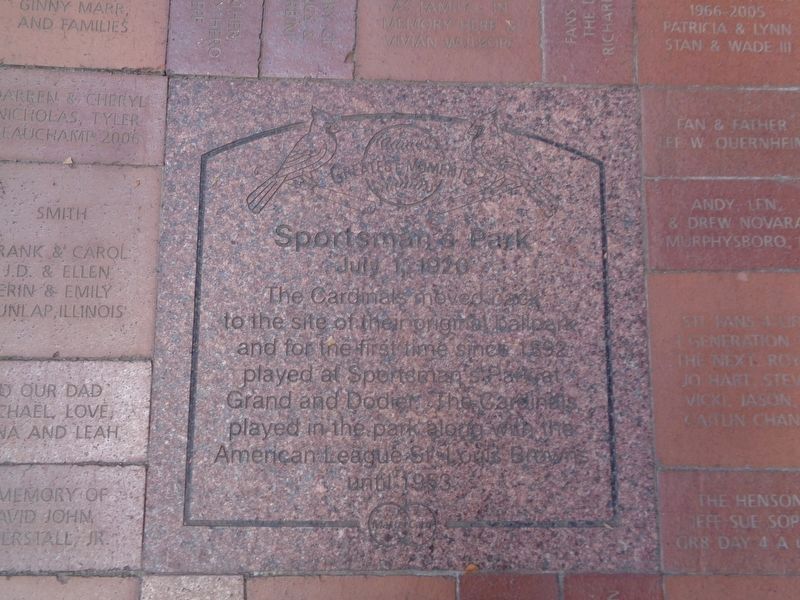 The Cardinals moved back to the site of their original ballpark, and for the first time since 1892 played at Sportsman's Park at Grand and Dodier. The Cardinals played in the park along with the American League St. Louis Browns until 1953.

Topics and series. This historical marker is listed in these topic lists: Parks & Recreational Areas • Sports. In addition, it is included in the Missouri, St. Louis Cardinals Greatest Moments series list. A significant historical date for this entry is July 1, 1920.

Also see . . .  Sportsman's Park on Wikipedia. Sportsman's Park was the home of the Cardinals until 1966, when it was replaced by Busch Stadium II. August Busch (then-Cardinals owner) donated the land of Sportsman's Park, and today it is the site of Herbert Hoover Boys and Girls Club. The grandstands were torn down, but the baseball diamond still exists. (Submitted on September 3, 2020, by Jason Voigt of Glen Carbon, Illinois.)

Additional keywords. baseball, Major League Baseball, National League
Credits. This page was last revised on September 3, 2020. It was originally submitted on May 4, 2019, by Devry Becker Jones of Washington, District of Columbia. This page has been viewed 102 times since then and 20 times this year. Photo   1. submitted on September 3, 2020, by Jason Voigt of Glen Carbon, Illinois.
Share this page.