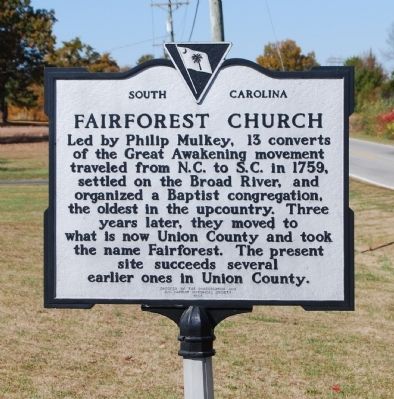 Photographed By Brian Scott, November 8, 2008
1. Fairforest Church Marker
Inscription.
Fairforest Church. . , Led by Philip Mulkey, thirteen converts of the Great Awakening movement traveled from N.C. to S.C. in 1759, settled on the Broad River, and organized a Baptist congregation, the oldest in the upcountry. Three years later, they moved to what is now Union County and took the name Fairforest. The present site succeeds several earlier ones in Union County. . This historical marker was erected in 1984 by Congregation of Fairforest Baptist Church and S.C. Baptist Historical Society. It is in Union in Union County South Carolina

Led by Philip Mulkey, thirteen converts of the Great Awakening movement traveled from N.C. to S.C. in 1759, settled on the Broad River, and organized a Baptist congregation, the oldest in the upcountry. Three years later, they moved to what is now Union County and took the name Fairforest. The present site succeeds several earlier ones in Union County.

Topics. This historical marker is listed in these topic lists: Churches & Religion • Notable Events • Settlements & Settlers. A significant historical year for this entry is 1759.

Other nearby markers. At least 10 other markers are within 4 miles of this marker, measured as the crow flies. Furman L Fendley Highway (approx. 2.2 miles away); Presbyterian Cemetery (approx. 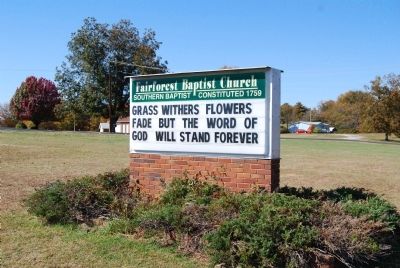 Additional commentary.
1. About Philip Mulkey
Rev. Philip Mulkey was born May 14, 1732, near Halifax or Roanoke, NC. He was raised Anglican, but was baptized by Rev. Shubal Stearns around Dec. 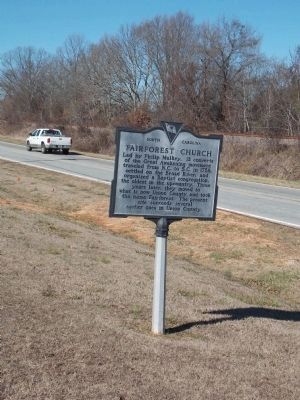 Photographed By Stanley and Terrie Howard, February 9, 2013
3. Fairforest Church Marker
25, 1756, after a remarkable conversion. Mulkey was called to the ministry in Stearns’s church in February and ordained in Oct. 1757. He served as pastor of Deep River Church, NC (1759 or 1760) when he came to Broad River, SC, and then removed to Fairforest in 1762. Mulkey preached throughout the surrounding parts in North and South Carolina.

During the Revolution, nothing is known of him except that he was probably a loyalist or carried non-resistance far. By his wife Ann Ellis he had David, Jonathan, Sarah, Philip, Martha; the last known ministerial service performed by him was as one of the presbytery constituting Cheraw Hill Church in 1782. He was excommunicated in 1790 and the churches warned against him for adultery, perfidy, and falsehood long continued in. In 1795, he was still engaged in the "Practice of Crimes and Enormities at which Humanity Shudders." Nothing further is known of him, but as his son, Jonathan Mulkey, appears in 1809 as a minister of Buffalo Ridge Church of Holston Assoc., TN, the family probably moved to that state. (Source: South Carolina Baptists by Leah Townsend, p. 125.)
— Submitted March 9, 2009, by Brian Scott of Anderson, South Carolina.
2. More About Philip Mulkay
From outward appearance, South Carolinians seemed to be united

Photographed By Brian Scott, November 8, 2008
4. Fairforest Baptist Church - East Side
in their defiance of the British Empire. That, however, was far from the case. In Charleston, vocal opponents of the Provincial Congress were silenced by physical threats or banishment to the countryside. The overwhelming black majority in the lowcountry was a matter of grave concern. As an example of what happened to any black Carolinian who aided the British, Thomas Jeremiah, a free person of color, was hanged for saying he would help his king's forces if they came to South Carolina.

Dealing with the backcountry was a bit more problematic. for nearly a generation, residents of the interior portions of the colony had been slighted by the lowcountry-dominated Commons House of Assembly. At best, backcountry folk were treated as second-class citizens; at worst, they were simply the first line of defense against the Indians. The malapportionment of the Provincial Congress reflected the power of the lowcountry elite and the disdain with which it regarded its county cousins.

Therefore, it is no wonder that reports began filtering down to Charleston about open opposition to the Provincial Congress. One of the most outspoken critics was Thomas Fletchell, a well-known backcountry planter who lived in the Fairforest community between the Broad and Saluda Rivers...Fletchell was not along. The Reverend Philip Mulkay, the pastor of the Fairforest Baptist Church, counseled 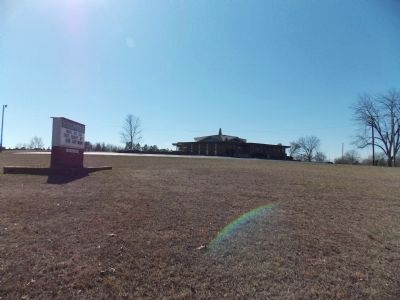 Photographed By Stanley and Terrie Howard, February 9, 2013
5. Fairforest Church Marker
his flock to remain loyal to the Crown. There were a number of others in the backcountry who considered the confrontation with Great Britain a lowcountry problem. (Source: Partisans and Redcoats: The Southern Conflict That Turned the Tide of the American Revolution by Walter B. Edgar (2003), pgs 29-30.)
— Submitted August 20, 2009, by Brian Scott of Anderson, South Carolina.
3. Backcountry Baptists
Backcountry Baptists, influenced by the Great Awakening before migrating to South Carolina, were not dependent upon an educated clergy. They believed in letting any man preach who was called by the Holy Spirit. They also developed an effective technique for ministering to the scattered settlements in the backcountry. Once a church was established, it became the mother church for the area. For example, the Fairforest Church on Fairforest Creek (Union County) under the leadership of the Reverend Philip Mulkey organized at least nine branches before the Revolution. By 1772 this ingenious organizational plan soon resulted in twenty-four organized churches and forty-nine meetinghouses, most of which were in the backcountry. (SourceSouth Carolina: A History by Walter B. Edgar, pg. 183.)
— Submitted March 9, 2009, by Brian 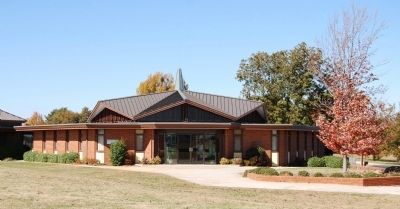 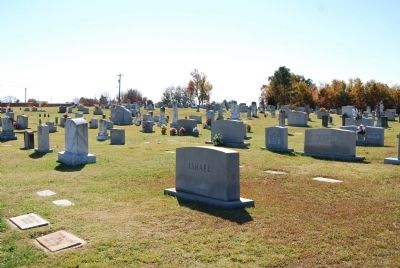