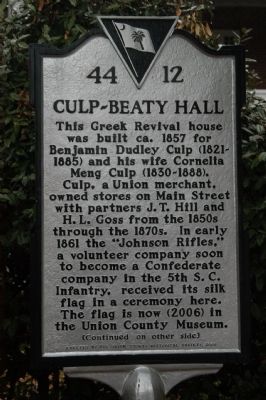 Photographed By Michael Sean Nix, November 13, 2008
1. Culp-Beaty Hall Marker
Inscription.
Culp-Beaty Hall. . , [Front Side]: , This Greek Revival house was built ca. 1857 for Benjamin Dudley Culp (1821-1885) and his wife Cornelia Meng Culp (1830-1888). Culp, a Union merchant, owned stores on Main Street with partners J.T. Hill and H.L. Goss from the 1850s through the 1870s. In early 1861 the "Johnson Rifles," a volunteer company soon to become a Confederate company in the 5th S.C. Infantry, received its silk flag in a ceremony here. The flag in now (2006) in the Union County Museum. , [Reverse Side]: , In 1876, Gen. Wade Hampton, running for governor, made a campaign speech from the second-story portico. The house passed to the Beaty family through B.D. Culp's daughter Cornelia C. Beaty (1864-1892), wife of William T. Beaty (1864-1944). This house, which features massive fluted Doric columns and a full width two-story portico with large brackets and a pierced blaustrade, was listed on the National Register of Historic Places in 1975. . This historical marker was erected in 2006 by Union County Historical Society. It is in Union in Union County South Carolina

[Reverse Side]:
In 1876, Gen. Wade Hampton, running for governor, made a campaign speech from the second-story portico. The house passed to the Beaty family through B.D. Culp's daughter Cornelia C. Beaty (1864-1892), wife of William T. Beaty (1864-1944). This house, which features massive fluted Doric columns and a full width two-story portico with large brackets and a pierced blaustrade, was listed on the National Register of Historic Places in 1975.

Topics and series. This historical marker is listed in these topic 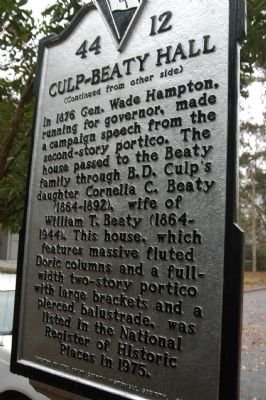 Click or scan to see
this page online
lists: Notable Buildings • War, US Civil. In addition, it is included in the South Carolina, Union County Historical Society series list. A significant historical year for this entry is 1857.

Regarding Culp-Beaty Hall. Access may be limited. Also, there 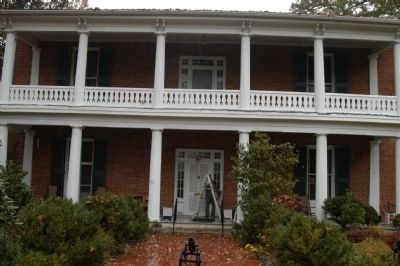 Photographed By Michael Sean Nix, November 13, 2008
3. Culp-Beaty Hall
is a lot of vegetation around the house that obscures the house.

4. 5th SC Infantry Regiment. This was one of the first regiments organized by direction of Governor Pickens early in 1861, under authority of An Act to provide an Armed Military Force, passed by the General Assembly of South Carolina, December 17, 1860. (Submitted on November 13, 2008, by Brian Scott of Anderson, South Carolina.) 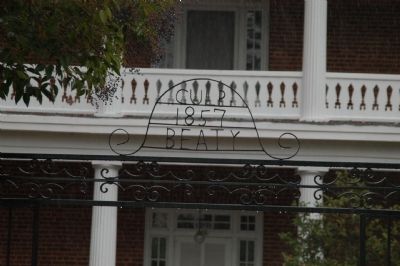 The eight-panel center door with transom is balanced by 2/2 lights with small panel doors on the lower portion allowing access form the parlors to the porch area. The sidelights of the entry door and center balcony door are repeated in Palladian-derived windows with sidelights. Brackets under the eaves and louvered shutters further compliment this facade. The shingled hip roof is punctuated by two interior chimneys.

The left elevation with paired 2/2 lights has a broad belt course and a plain cornice. The brick of the rear elevation has been covered in masonry and the original stoop enlarged and enclosed to provide a modern kitchen, using old brick to blend with the original structure.

The double-tiered porch of the right elevation has been enclosed to provide additional living space and plumbing facilities.

Interior
Four large rooms with heart pine floor boards open off the central hall. The interior plastered walls of brick are more than a foot thick. The twelve-foot high ceilings feature unusual medallions - a garland wreath in the right front parlor and a heavy stylized leaf design in the entrance 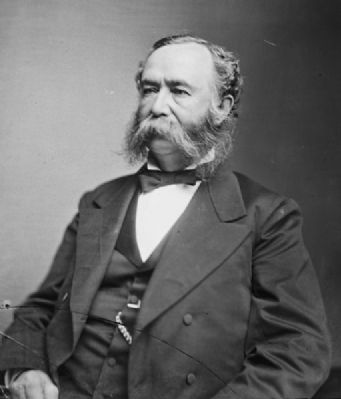 An identical room arrangement is to be found on the second floor with a center door opening from the hallway to the upper porch.

Surroundings
Large oak trees surround the house and shade the gardens. Several of the terraces are undergoing restoration as flower and herb gardens. The cook's house which is believed to be the original detached kitchen is still standing, although in poor condition.

Significance
The Culp House, a classically styled two-story brick structure, was constructed for Mr. B.D. Culp, a prosperous businessman in early Union. The Culp House served as a focal point for political activity in Union County during the 19th Century.

Architecture: Derived from the transitional architecture trends of the 1850s, the Culp House combined both Georgian and neo-classical motifs. The South Carolina low country flavor of the structure with its wide porticos and airy window treatments reflects the builder's familiarity with the domestic architecture of Charleston, where he conducted a successful cotton trade.

Military: B.F. Arthur, secretary of the Secession Convention, delivered an oration from the Culp House porch to the Johnson Rifles regiment on January 31, 1861. At this time a flag designed by Union ladies under the direction of Mrs. Madison Wallace, sister-in-law of B.D. Culp, was presented to the regiment. This flag is now in a private collection.