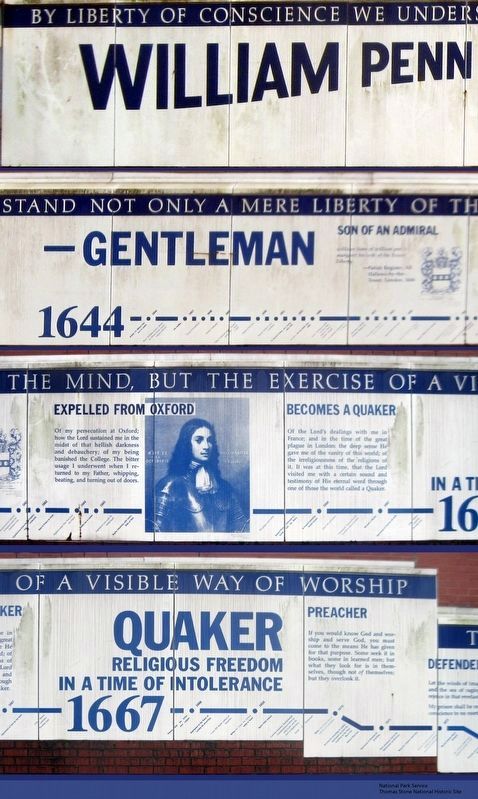 By liberty of conscience we understand not only a mere liberty of the mind, but the exercise of a visible way of worship this day my country was confirmed to me by the name of Pennsylvania. My God will, I believe, bless and make it the seed of a nation

--Gentleman
Son of an Admiral william Sonn of william pen & margaret his wife of the Tower Liberty --Parish Register, All Hallows-by-the Tower, London 1655

Expelled from Oxford
Of my persecution at Oxford; how the Lord sustained me in the midst of that hellish darkness and debauchery; of my being banished the College. The bitter usage I underwent when I returned to my Father, whipping, beating, and turning out of doors.

Become a Quaker
Of the Lord's dealings with me in France; and in the time of the great plague in London; the deep sense He gave me of the vanity of this world; of the irreligiousness of the religions of it. It was at this time, that the Lord visited me with a certain sound and testimore of His eternal word through one of those the world called a Quaker.

Quaker
Religious Freedom in a Time of Intolerance 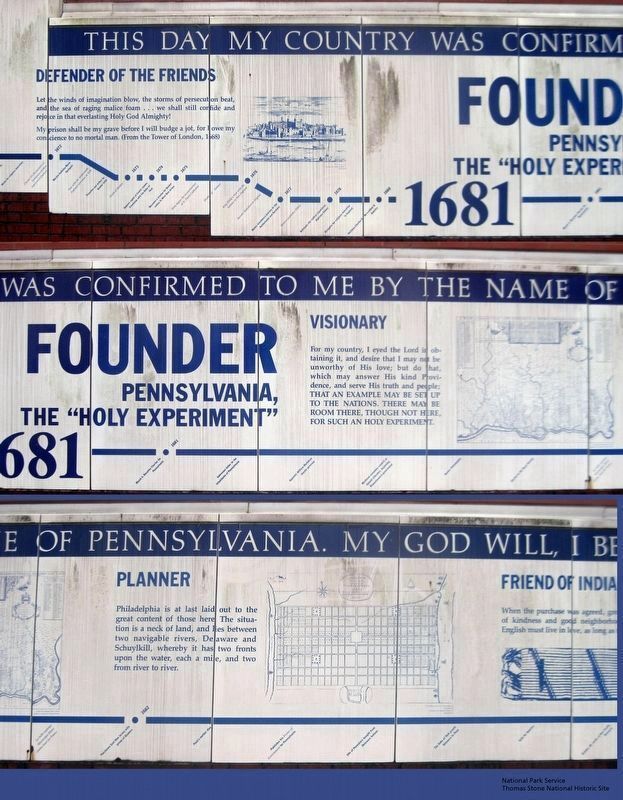 Click or scan to see
this page online
you would God and worship and serve God, you must come to the means He has given for that purpose. Some seek it in books, some in learned men, but what they look for is in themselves though not of themselves, but they overlook it.

Defended of the Friends
Let the winds of imagination blow, the storms of persecution beat, and the sea of raging malice foam...we shall still confide and rejoice in that everlasting Holy God Almighty! My prison shall be my grave before I budge a jot, for I owe my conscience to no mortal man. (From the Tower of London, 1668)

Visionary
For my country, I eyed the Lord in obtaining it, and desire that I may not be unworthy of His love; but do that, which my answer His kind Providence, and serve His truth and people; that an example may be set up to the nations. There may be room there, though not here, for such an holy experiment.

Planner
Philadelphia is at last laid out in the great content of those here. The situation is a neck of land, and lies between two navigable rivers, Delaware and Schuylkill, whereby it has two fronts upon the water, each a mile, and two from river to river.

Friend of Indians
When the purchase was agreed, great promises passed between us of kindness and good neighborhood, and the Indians and English must live 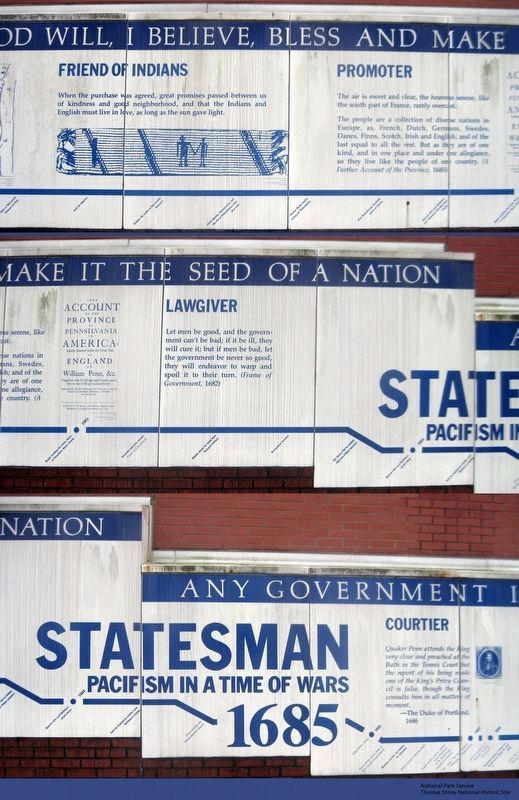 Promoter
The air is sweet and clear, the heavens serene, like the south part of France, rarely overcast. The people are a collection of diverse nations in Europe, as, French, Dutch, German, Swedes, Danes, Finns, Scotch, Irish and English, and of the last equal to all the rest. But as they are of one kind, and in one place and under one allegiance, so they live like the people of my country. (A Further Account of the Province, 1685)

Lawgiver
Let me be good, and the government can't be bad; it is be ill, they will cure it; but if men be bad, let the government be never so good they will endeaver to warp and spoil it to their turn. (Frame of Government, 1682)

Statesman
Pacifism in a Time of Wars

Courtier
Quaker Penn attends the King very close and preached at the Battle in the Tennis Court but the report of his being made one of the King's Privy Council is false, though the King consults him in all matters of moment. --The Duke of Portland, 1686

Fall From Favor
I have been above these three years hunted, up and down, and could never be allowed to live quietly in city or country, even where there was hardly a pretense against me, so that I have not only been unprotected, but persecuted by the government.

Man of Letters
The sovereign princes would, 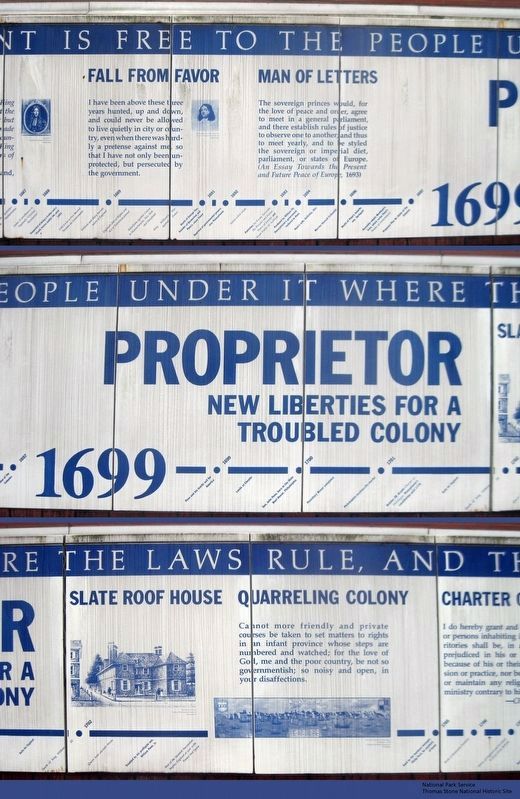 National Park Service, Thomas Stone National Historic Site, January 6, 2019
4. William Penn Marker & Timeline, Part 4
for the love of peace and order, agree to meet in a general parliament, and there establish rules of justice to observe one to another and thus to meet yearly, and to be styled the sovereign or imperial diet, parliament, or states of Europe. (An Essay Towards the Present and Future Peace in Europe, 1693)

Quarrelling Colony
Cannot more friendly and private courses be taken to set matters to rights in an infant province whose steps are numbered and watched; for the love of God, me and the poor country, be not so governmentish; so noisy and open, in your disaffections.

Charter of Privileges
I do hereby grant and declare that no person or persons inhabiting this province, or territories shall be, in any case, molested or prejudiced in his or their person or estate because of his or their conscientious persuasion or practice, not be compelled to frequent or maintain any religious worship place or ministry contrary to his or their mind.

"Man of Sorrows" Memorial
O Pennsylvania, what hast thou not cost me! Above £30,000 more that I ever got from it; two hazardous and most fatiguing voyages, my straits and slavery here, and my son's soul almost! (To James Logan, 1704)

And as his love was great and endeavors 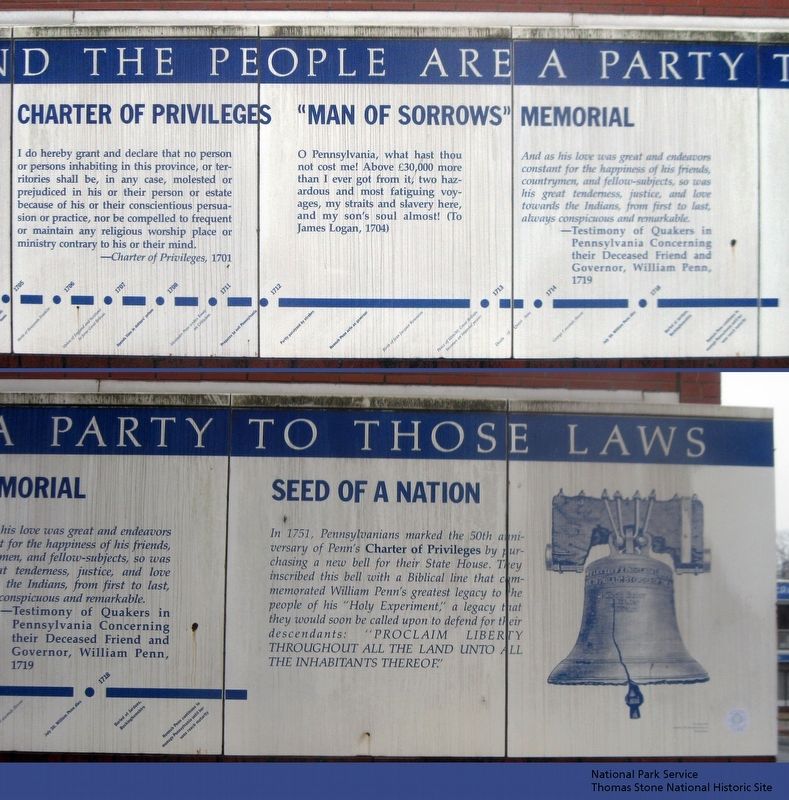 Seeds of a Nation
In 1751, Pennsylvania marked the 50th anniversary of Penn's Charter of Privileges by purchasing a new bell for their State House. They inscribed this bell with a Biblical line that commemorated William Penn's greatest legacy that they would soon be called upon to defend for their descendants: "Proclaim liberty throughout all the land unto all the inhabitants thereof."

1661
Religious persecution renewed in England under the (Unreadable text)

1665
Studies law in London England at war with the Netherlands Begins friendship with James, Duke of York The plague in London Admiral Penn victorious in a battle with the Dutch

1669
Writes No Cross, No Crown, while in Tower Again visits Ireland Carolina founded; Fundamental Constitutions written by John Locke and the Earl of Shaftesbury Death of Rembrant

1674
Appears again at Court; renews friendship with the Duke of York

1680
Petitions Charles II for a colony in America

1688
James II overthrown in England's "Glorious Revolution" Suspected of being a traitor and a Jesuit; leaves public life until 1693 John Locke writes Second Treatise on Government

1689
William and Mary become rules of England England's Bill of Rights and Act of Toleration passed Rebellions against Crown in Massachusetts, New York, and Maryland King Williams's War against France

1699
Penn and his family sail for America Lands at Chester

1705
Sued by his business manager, Philip Ford, for payment of (Unreadable text)

1707
Union of England and Scotland to form Great Britain

Topics and series. This historical marker is listed in these topic lists: Colonial Era • Native Americans • Settlements & Settlers. In addition, it is included in the Quakerism series list. A significant historical date for this entry is October 14, 1644.