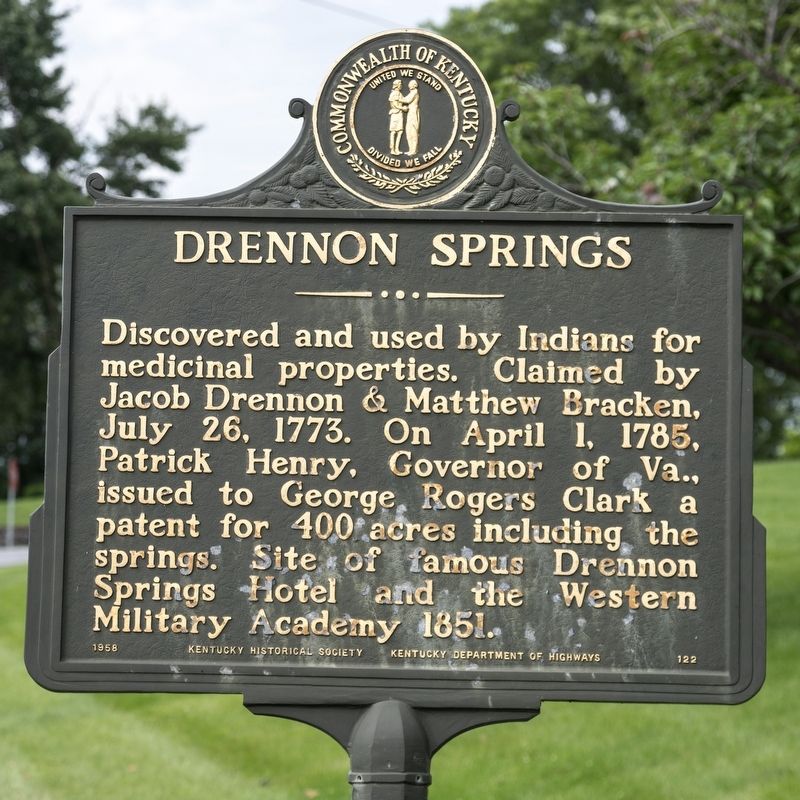 Photographed By J. J. Prats, June 12, 2019
1. Drennon Springs Marker
Inscription.
Drennon Springs. . Discovered and used by Indians for medicinal properties. Claimed by Jacob Drennon and Matthew Bracken, July 26, 1773. On April 1, 1785, Patrick Henry, Governor of Va. issued to George, Rogers Clark a patent for 400 acres including the springs. Site of famous Drennon Springs Hotel and the Western Military Academy 1851. . This historical marker was erected in 1958 by Kentucky Historical Society and Kentucky Department of Highways. It is in New Castle in Henry County Kentucky

Discovered and used by Indians for medicinal properties. Claimed by Jacob Drennon & Matthew Bracken, July 26, 1773. On April 1, 1785, Patrick Henry, Governor of Va. issued to George, Rogers Clark a patent for 400 acres including the springs. Site of famous Drennon Springs Hotel and the Western Military Academy 1851.

Topics and series. This historical marker is listed in these topic lists: Colonial Era • Natural Features • Notable Places. In addition, it is included in the Kentucky Historical Society series list. A significant historical date for this entry is April 1, 1785.

Other nearby markers. At least 8 other markers are within 9 miles of this marker, measured as the crow flies. Civil War Actions (within shouting distance of this marker); County Named, 1798 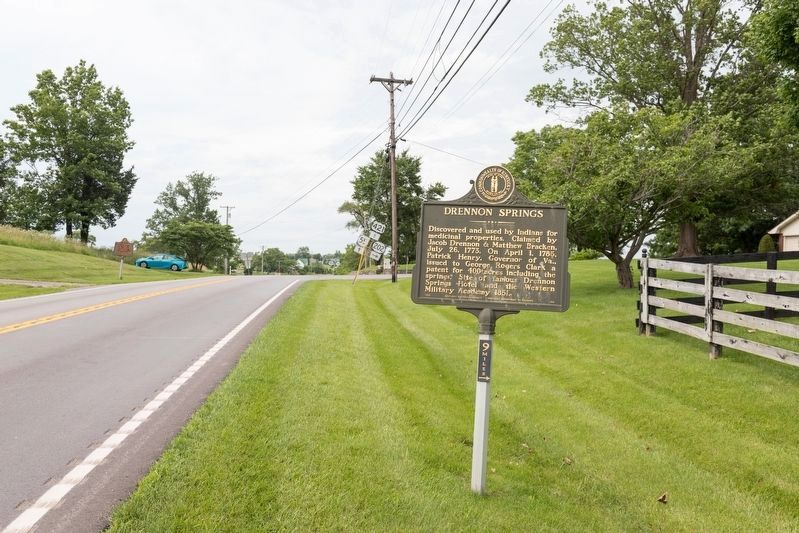 Photographed By J. J. Prats, June 12, 2019
2. Drennon Springs Marker
The small vertical sign on marker’s post reads “9 miles” with an arrow pointing to the right. The Civil War Actions marker is in the distance across the road on the left.

Additional commentary.
1. Description of Drennon Springs, Ky.
“This unsigned and undated manuscript was probably written by General George D. Dicken (1809-1874); it can be found at the University of Kentucky Special Collections and Archives, Dicken-Troutman-Balke Family Papers.”—1997 misc. page at UKY.edu

My first visit to Drennon Springs was in 1831. There was a large stone house, two stories with a basement, about three hundred yards below the Black Sulphur or the big spring that affords the water that is shipped to market. A beautiful lawn thickly set in blue grass surrounded the house and extended to a row of twenty or more cottages, built of logs, white washed and very neat. The beds were new and clean. The proprieters told us that we ought to have come earlier in the season (this was in October) when all the grandees were there in their fine carriages, “Mrs Tom Smith and others.”
The water of the Black Sulphur Spring is very salt and sulphurous with a strong smell like burnt powder or burning coal. All animals become very fond of it. Many times in after years, I have had to sit firm and hold my horse as we reached the ford, so eager was he to et to the water. The stream is very cold, and the horses would thrust in their noses and drink and drink, then take a long breath and drink again as if they could never get enough.

The water boils up out of the ground in a level plain or valley, spouting up five or six feet through a “gum” or hollow log placed upright.

All the cattle are fond of it and it is very good for them, and it was sought after by the buffaloes, deer, bears, panthers and smaller beasts, that used to go there in great numbers. The hills that are covered with cedar, oak, black-jack, persimmons and black-haws, are very steep on the north side of the creek, standing out in peaks or spurs, between which hollows or ravines run down to the creek. Down these the herd of buffaloes came, wearing the stones and earth away three or four feet. (The trace must be there now.)

There were several trails leading down to the creek from off the hills into the valley where was plain to be seen a broad trail or road one hundred feet wide and curving round in graceful lines to the delicious waters they had come miles to get. What a terrific noise and shaking of the earth there must have been when all that immense herd was gathered around that spring!

The Indians must have gone there to drink the water for the salt as the other animals did. On the hills and everywhere there could be found flints that had been used to point arrows. Tomahawks with a pipe in the handles and smooth stones that had bee used to crush their corn. There were petrified flints like the gizzards of large birds. Wild turkeys were very abundant in Kentucky. I saw large kettles near the Spring that had been used to make salt and also a man who had hauled the wood from the hills to make fires to boil down the water.

There was a Mrs. Sea, who lived near “the Lick,” as every one called the place in those days. Mrs. Sea left her two children at home and went to visit her relatives several miles away, “the dark day” set in and she could not make her way back through the heavy timber and undergrowth that was every where on hill and valley. When she reached home the next day, the children were gone and they never were found; they had wandered into the woods and perished and the wild animals had devoured their bodies.

The making of salt at Drennon’s Lick must have begun in the Eighteenth century. George Rogers Clarke took out the original grant of the land and he probably sent the large salt kettles there. The old stone house was originally a fort, enclosed in a stockade for the protection of the salt-makers.

In 1843, I again visited Drennon’s Lick. The stone house and little log cottages were all gone and the beautiful bluegrass lawn was turned into a corn field. The hills were still covered with cedar and oak and the Spring gushed out the same as it had done when I was a child. The big kettles were gone and the old wells were filled up and grown over with weeds and grass and were no longer the dangerous places that we had to shun when we went near them. There were still in the neighborhood of the Lick some of the big bones of a large animal found there. I saw in a cabin a large thighbone; it lay on the floor and the children sat upon it. I thought at first it was the limb of a tree. I also saw a large tooth that weighted two or three pounds and I heard there were other bones. All had been dug up out of the mud near the Lick.

At the time of my second visit, new buildings had been erected on the other side of the Creek more than a mile from the Black Sulphur spring upon the gradually sloping hillside in full view of the cedar bluffs opposite. A fine spring of cold, fresh water was near and the White Sulphur only a half mile away. Dr. Hunter was in charge of the watering place and for many seasons after Drennon was one of the most popular and brilliant resorts in the country. The buildings were repeatedly enlarged to accommodate the increasing number of the guests who were of the best people in the land.

The Butler, Taylor, Hancock, Clay, Crittenden, Johnston, Todd, McDowell and Marshall families met there distinguished warriors and statesmen from other states in social relaxation while the beauties and belles of Kentucky and the South received new homage and added to their laurels. Many private cottages were built by wealthy Southerners who brought their families and servants for the entire summer.

A severe scourge of the cholera in 1850 was the beginning of the downfall of old Drennon Springs.

The Western Military Institute moved form Georgetown, Ky. to Drennon with a superior corps of Professors, most of them graduates of West Point and a good Southern patronage. The military discipline prepared many young men for the part they were to take in the Civil War. Among the Professors was James G. Blaine afterwards a candidate for the Presidency of the United States.

Editor’s want-list for this marker. Photos of Drennon Springs • Can you help?
Share this page.