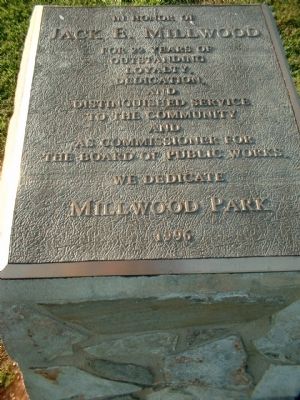 Photographed By Mike Stroud, April 19, 2008
1. Millwood Park Marker
Inscription.
Millwood Park. .
In Memory of Jack E. Millwood For 22 Years Of Outstanding Loyalty Dedication and Distinguished Service As Commissioner For The Board Of Public Works We Dedicate Millwood Park. . This historical marker was erected in 1996 by Gaffney Board of Public Works. It is in Gaffney in Cherokee County South Carolina

In Memory of
Jack E. Millwood
For 22 Years Of
Outstanding
Loyalty
Dedication
and
Distinguished Service
As Commissioner For
The Board Of Public Works
We Dedicate
Millwood Park

Erected 1996 by Gaffney Board of Public Works. 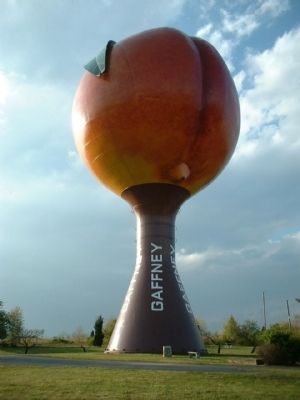 Photographed By Mike Stroud, April 19, 2008
2. Millwood Park Marker and its " Peachoid " Landmark
Park's home for "The Peachoid",which holds one million gallons of water

Also see . . .
1. The Peachoid, Wikipedia entry. a very large water tower in Gaffney, South Carolina, United States, that resembles a peach. The water tower holds one million gallons of water and is located on Interstate 85 between exits 90 and 92 (near the Cherokee Foothills National Scenic Highway ) (Submitted on November 21, 2008, by Mike Stroud of Bluffton, South Carolina.)

2. The Peachoid (youtube.com). The town of Gaffney SC has a water tower shaped like a peach. It holds a million gallons of water and is 150 feet tall. (Submitted on October 20, 2009, by Brian Scott of Anderson, South Carolina.)

3. The Changing South Finds Its Way on I-85. It begins quietly enough in the piney woods of southern Virginia. (Submitted on October 20, 2009, by Brian Scott of Anderson, South Carolina.) 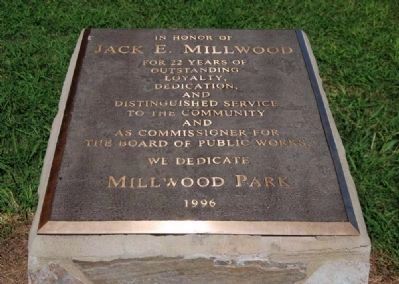 Photographed By Brian Scott, October 3, 2009
3. Millwood Park Marker
a powerhouse of creativity from Gaffney, yearned for an influential symbol of the peach industry that was spreading throughout the South Carolina Upstate. Several years before the first Peach Festival, Millwood had an idea for a tower, a nearly mile-high peach that would attract the attention of travelers on the Cherokee Foothills Scenic Highway. However, fate would intervene when in 1978 a study revealed a need for a water tank to increase water pressure and flow and improve fire protection in the I-85 area. Millwood realized the water tower could become his dream of a peachoid.

After a lengthy procedure of selecting designs, comparing artists' renditions and finally soliciting bids for construction, the board approved Chicago Bridge and Iron's $969,000 price in October 1979. A portion of the funds for the peachoid was provided through Appalachian Regional Commission and the South Carolina Appalachian Council of Governments.

The formation of a peach presented some problems, and although the job was challenging it was not daunting. Hours were spent inspecting real peaches to use for the model. The stem, twelve feet long and sixteen feet wide. The cleft, along the entire height of the peach, was created through steel paneling welded to the sphere. A nipple was added to the bottom to complete the transformation from a round water tank to the giant peachoid. Fifty 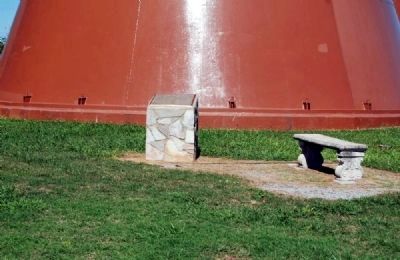 Photographed By Brian Scott, October 3, 2009
4. Millwood Park at the Base of the Peachoid
gallons of pain in more than twenty-five shades finished the job.

Millwood was the perfect person to create the peachoid. He has a strong family network. The father of a son with Down Syndrome, he was part of the team that created and ensured the construction of the Charles Lae Center in Spartanburg. Charles Lae's mission was to provide rehabilitative and educational services to children and adults with minimal and physical handicaps.

Millwood served as Cherokee County coroner for twelve years beginning in 1950. He received the Young Man of the Year Award from the Jaycees in 1953 and the Volunteer of the Year Award for the South Carolina Industrial Development Board in 1982. He helped organize the Cherokee County Association for retarded Citizens, testified before Congress to help secure the Cowpens Battleground Monument and was on the original highway committee that conceived and named SC Highway 11 the Cherokee Scenic Foothills Highway. The South Carolina Appalachian Council of Governments, which was organized in 1965, will go down as one of Millwood's greatest contributions to the state of South Carolina. The group's sole purpose was to advise Governor McNain on how to invest funds channeled into the six counties of the Upstate that had been designed as part of the federal Appalachian region. Two members of the six counties were appointed by each county's legislative 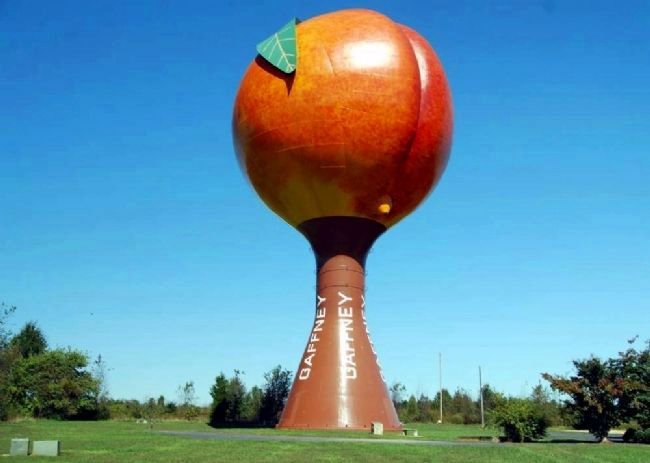 Photographed By Brian Scott, October 3, 2009
5. Millwood Park and Peachoid
delegation. They addressed local and regional planning efforts and schools, the Cherokee Foothills Scenic Highway (SC 11), the construction and equipping of the region's three technical colleges and the Peachoid. Millwood, the longest serving continuous member of any of the government council's organizations, keeps an eye on the technical colleges and new facilities being constructed. He also is hopeful that Duke Power Company will decide to build its proposed multi-billion-dollar nuclear generation station in Cherokee County. The splendid achievements of the intellect of Jack Millwood, in his family and in the South Carolina Upstate, are everlasting.

Millwood is active in his church as a teacher and leader. He has received the Cherokee and Gaffney Sertoma Club's Service of Mankind Award, the Boy Scout Silver Beaver Award for over fifty years of service and the Order of the Palmetto, and he had been selected to the Cherokee County Hall of Fame. 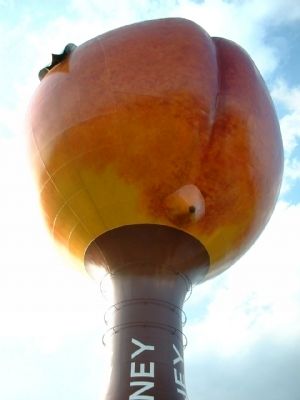 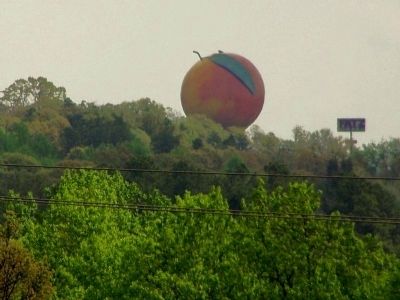 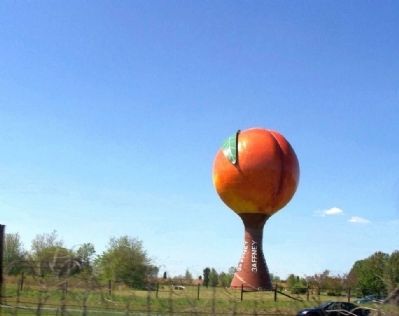 Photographed By Mike Stroud, 2008
8. Millwood Park Marker, at the base of The Peachoid
As seen from across I-85, looking west 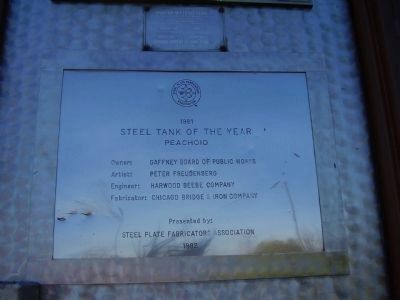 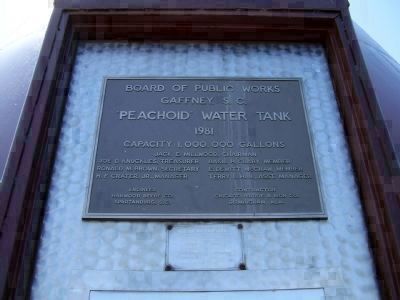 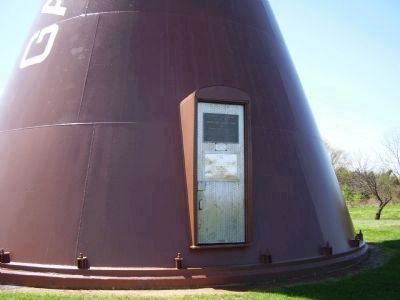