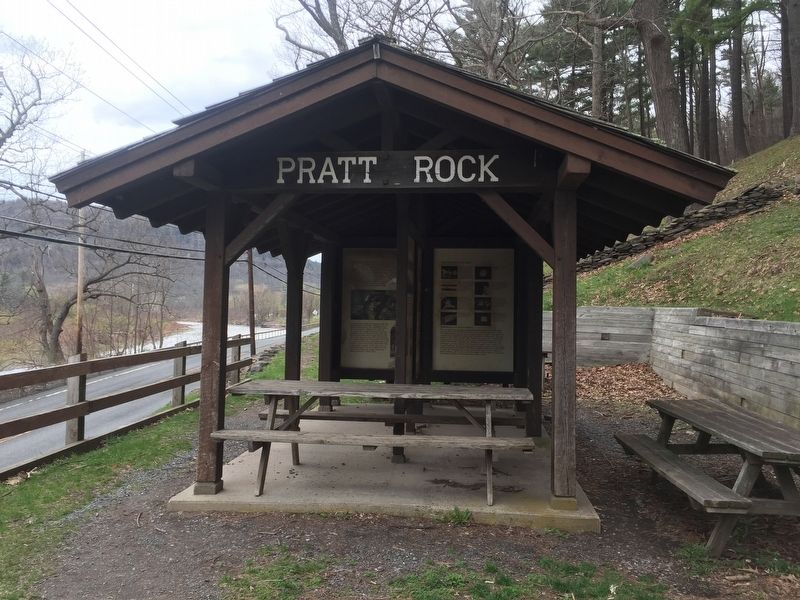 “Zadock Pratt,” wrote a contemporary writer, “is an unassuming and patriotic citizen, who by force of his native genius, has risen from obscurity to distinction, from poverty to wealth, from the workshop to the Halls of Congress, and who, in whatever situation he has been … has ever maintained the character of a straightforward, honest man.”

In spite of his humble beginnings and poor education, Pratt had the wisdom, the vision, and the sense of history to have made an indelible mark on the country while serving in Congress. The following are some of the entries made 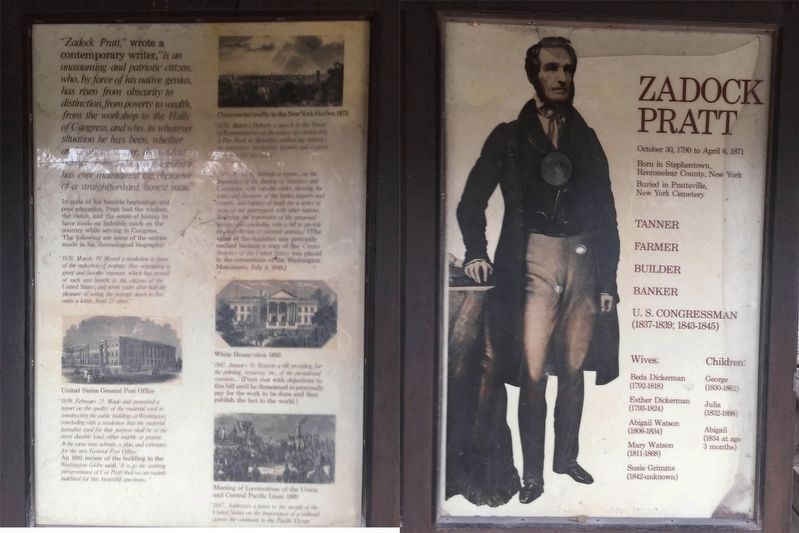 Click or scan to see
this page online
in his chronological biography.

“1838 March 19, Moved a resolution in favor of reduction of postage, thus, originating , a great and favorite measure, which has proved such a benefit to the citizens of the United States, and seven years after, had the pleasure of voting the postage down to five cents a letter from 25 cents”

“1839 February 25, Made and presented a report on the quality of material used in constructing the public buildings at Washington; concluding with a resolution that the material hereafter used for that purpose shall be of the most durable kind, either marble or granite. At the same time submits a plan, and estimates for the new General Post Office.”

An 1841 review of the building in the Washington Globe said, “It is to the untiring perseverance of Col. Pratt that we are mainly indebted for this beautiful specimen…”

1839 March 1, Delivers a speech to the House of Representatives on the subject of completing a Dry Dock at Brooklyn embracing statistics on commerce, navigation, imports and exports from New York for ten years

1939 Submits a report … “on the importance of the Bureau of Statistics and Commerce with valuable tables, showing the loans and discounts of banks. Imports and exports, and balance of trade for a series of years of our government with other nations, 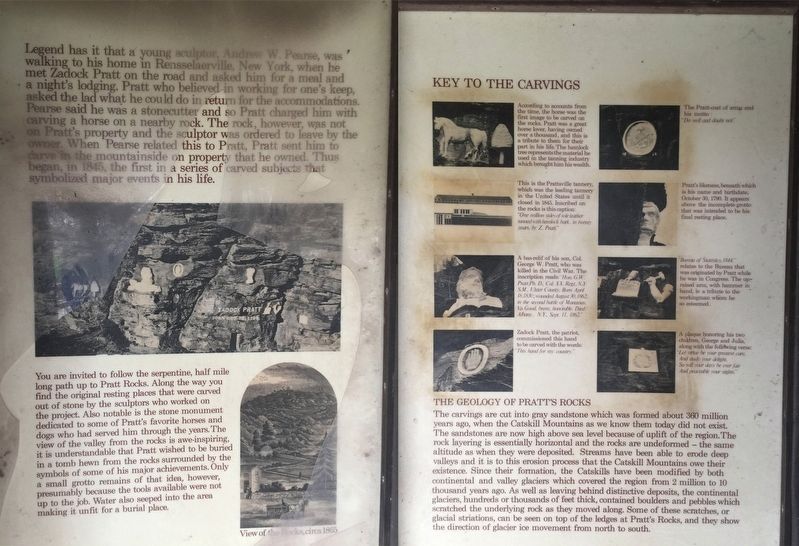 Photographed By Steve Stoessel
3. Panel 2
About the Rock Carvings
illustrating the importance of the proposal and concluding with a bill to provide the collection of national statistics.” (The value of the statistics was promptly realized because a copy of the Census Statistics of the United States was placed in the cornerstone of the Washington Monument July 4, 1848.)

“1845 January 10. Reports a bill providing for the painting , repairing, etc. of the presidential mansion…” (Pratt met with objections to this bill until he threatened to personally pay for the work to be done and then publish the fact to the world.)

“1847, Addresses a letter to the people of the United States on the importance of a railroad across the continent to the Pacific Ocean.

Panel 2
Legend has it that a young sculptor, Andrew W. Pearse, was walking to his home in Rensselaerville, New York, when he met Zadock Pratt on the road and asked him for a meal and night’s lodging. Pratt, who believed in working for one’s keep, asked the lad what he could do in return for the accommodations. Pearse said he was a stonecutter and so Pratt charged him with carving a horse on a nearby rock. The rock, however, was not on Pratt’s property and the sculptor was ordered to leave by the owner. When Pearse related this to Pratt, Pratt sent him to carve in the mountainside on property he owned. Thus began, in 1845, the 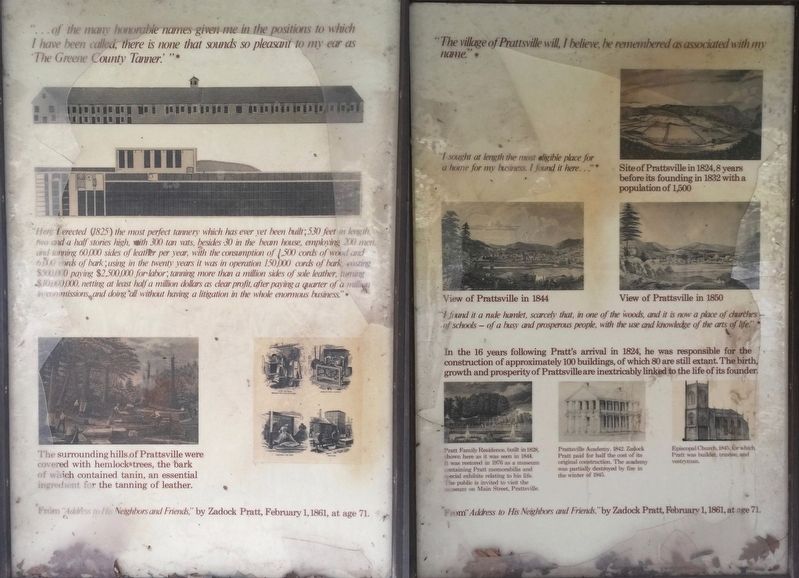 Photographed By Steve Stoessel
4. Panel 3
Prattsville and the Tannery
first of a series of carved subjects that symbolized major events in his life.

You are invited to follow a serpentine, half mile long path up to the Pratt Rocks. Along the way you will find the original resting places that were carved out of stone by the sculptors who worked on the project. Also notable is the stone monument dedicated to some of Pratt’s favorite horses and dogs who had served him through the years. The view of the valley from the rocks is awe-inspiring. It is understandable that Pratt wished to be buried in a tomb hewn from the rocks surrounded by the symbols of some of his major achievements. Only a small grotto remains of that idea, however, presumably because the tools available were not up to the job. Water also seeped into the area making it unfit for a burial place.

The Geology of Pratt’s Rocks
The carvings are cut into gray sandstone which was formed about 360 million years ago, when the Catskill Mountains as we know them today did not exist. The sandstones are now high above sea level because of uplift of the region. The rock layering is essentially horizontal and the rocks are undeformed – the same altitude as when they were deposited. Streams have been able to erode deep valleys and it is this erosion process that the Catskill Mountains owe their existence. Since their formation, the Catskills have been modified 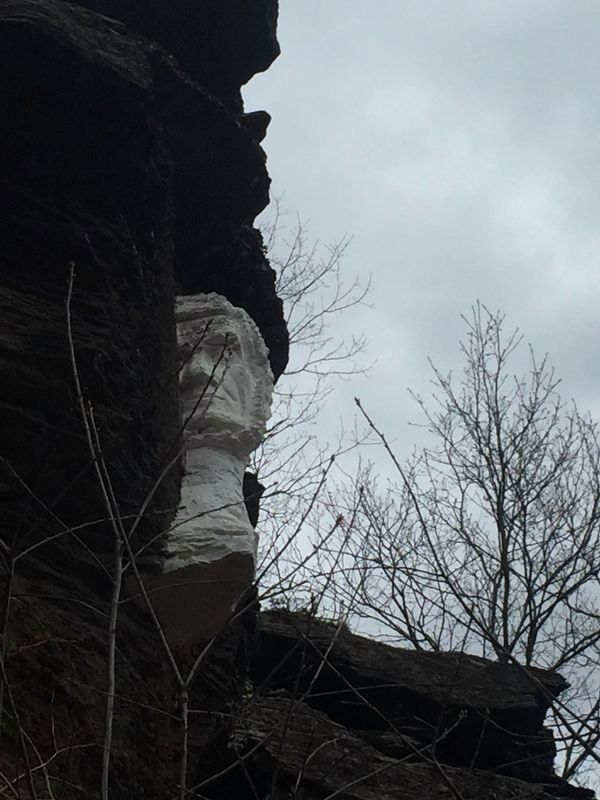 Photographed By Steve Stoessel, April 21, 2019
5. Pratt Rock Marker
Pratt's Likeness
by both continental and valley glaciers which covered the region from 2 million to 10 thousand years ago. As well as leaving behind distinctive deposits, the continental glaciers, hundreds of thousands of feet thick containers boulders and pebbles which scratched the underlying rock as they moved along. Some of these scratches or glacial striations can be seen on top of the ledges at Pratt’s Rocks, and they show the direction of glacier ice movement from north to south.

Key to the Carvings
Top left and proceeding counterclockwise:According to accounts from the time, the horse was the first image to be carved on the rocks. Pratt was a great horse lover, having owned over a thousand, and this is a tribute to them for their part in his life. The hemlock tree represents the material he used in the tanning industry which brought him his wealth.

This is the Prattsville tannery, which was the leading tannery in the United States until it closed in 1845. Inscribed on the rocks is this caption: “One million sides of sole leather tanned with hemlock bark, in twenty years, by Z. Pratt” 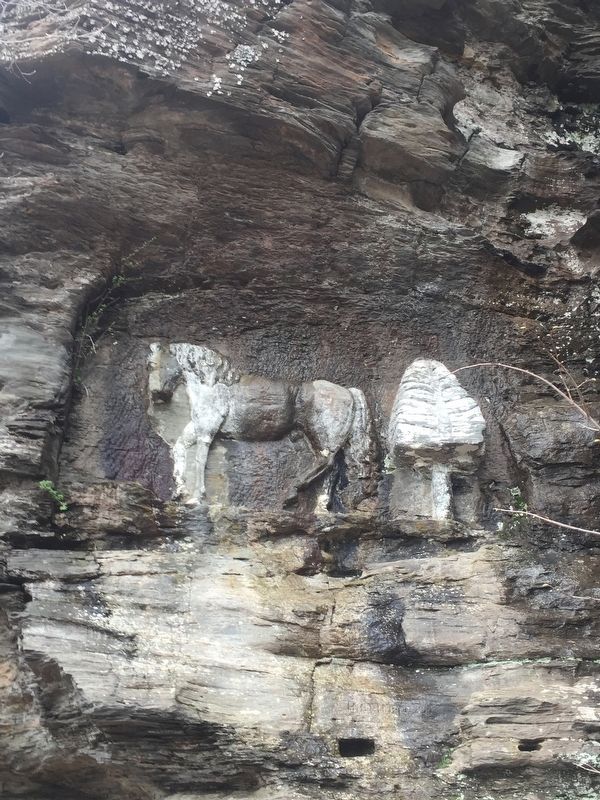 Zadock Pratt, the patriot, commissioned this hand to be carved with the words: “This hand for my country.”

A plaque honoring his two children, George and Julia, along with the following verse: "Let virtue be your greatest care, And study be your delight, So will your days be ever fair, And peaceable your nights”

“Bureau of Statistics, 1844” relates to the Bureau that was originated by Pratt while he was in Congress. The up-raised arm, with hammer in hand, is a tribute to the workingman whom he so esteemed.

Pratt’s likeness, beneath which is his name and birthdate, October 30, 1790. It appears above the incomplete grotto that was intended to be his final resting place.

The Pratt coat of arms and his motto: “Do well and doubt not”

Panel three:
“… of the many honorable names given me in the positions to which I have been called, there is none that sounds so pleasant to my ear as ‘The Greene County Tanner.’”

“Here I erected (1825) the most perfect tannery, which has ever yet been built; 530 feet in length, two and half stories high, with 300 tan vats, besides 30 in the beam vaults; employing 200 men, and tanning 60,000 sides of leather per year, with the consumption 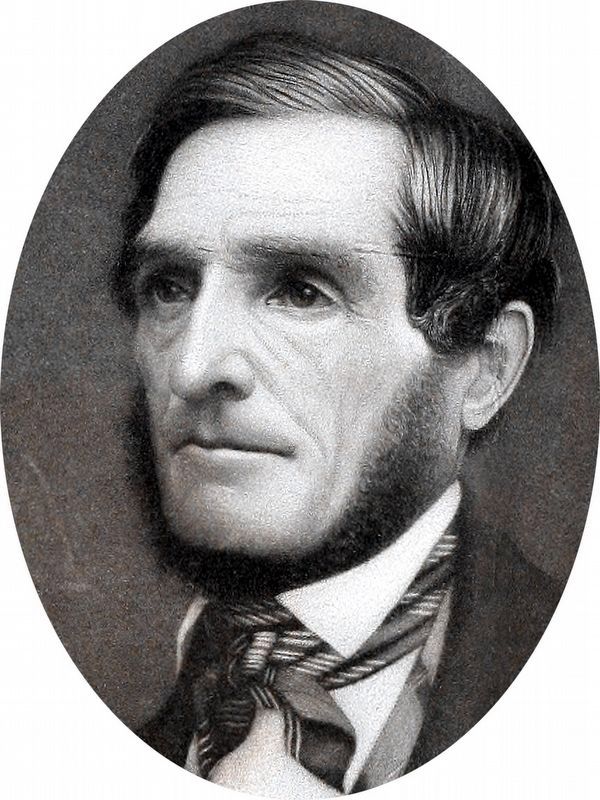 Internet Archive
7. Zadock Pratt
Engraved by T. Doney, from Description of the Prattsville Tannery by Zadock Pratt, 1847
of 1,500 cords of wood and 6,000 cords of bark; using in twenty years it was in operation 150,000 cords of bark; costing $500,000, paying $2,500,000 for labor; tanning more than a million sides of sole leather; turning $10,000,000 netting at least half a million dollars in clear profit after paying a quarter million in commissions, and doing all without a litigation in the whole enormous business.”

Photo Caption, bottom left: The surrounding hills of Prattsville were covered with hemlock trees, the bark of which contained tannin, an essential ingredient for tanning of leather.

“The Village of Prattsville will, I believe, be remembered as associated with my name.”

“I sought at length the most eligible place for a home for my business. I found it here …”

“I found a rude hamlet, scarcely that, in one of the woods, and it is now a place of churches, of schools, -- of a busy and prosperous people, with the use and knowledge of the arts of life.”

In the 16 years following Pratt’s arrival in 1824, he was responsible for the construction of approximately 100 buildings, of which 80 are still extant. The birth, growth, and prosperity of Prattsville are inextricably linked 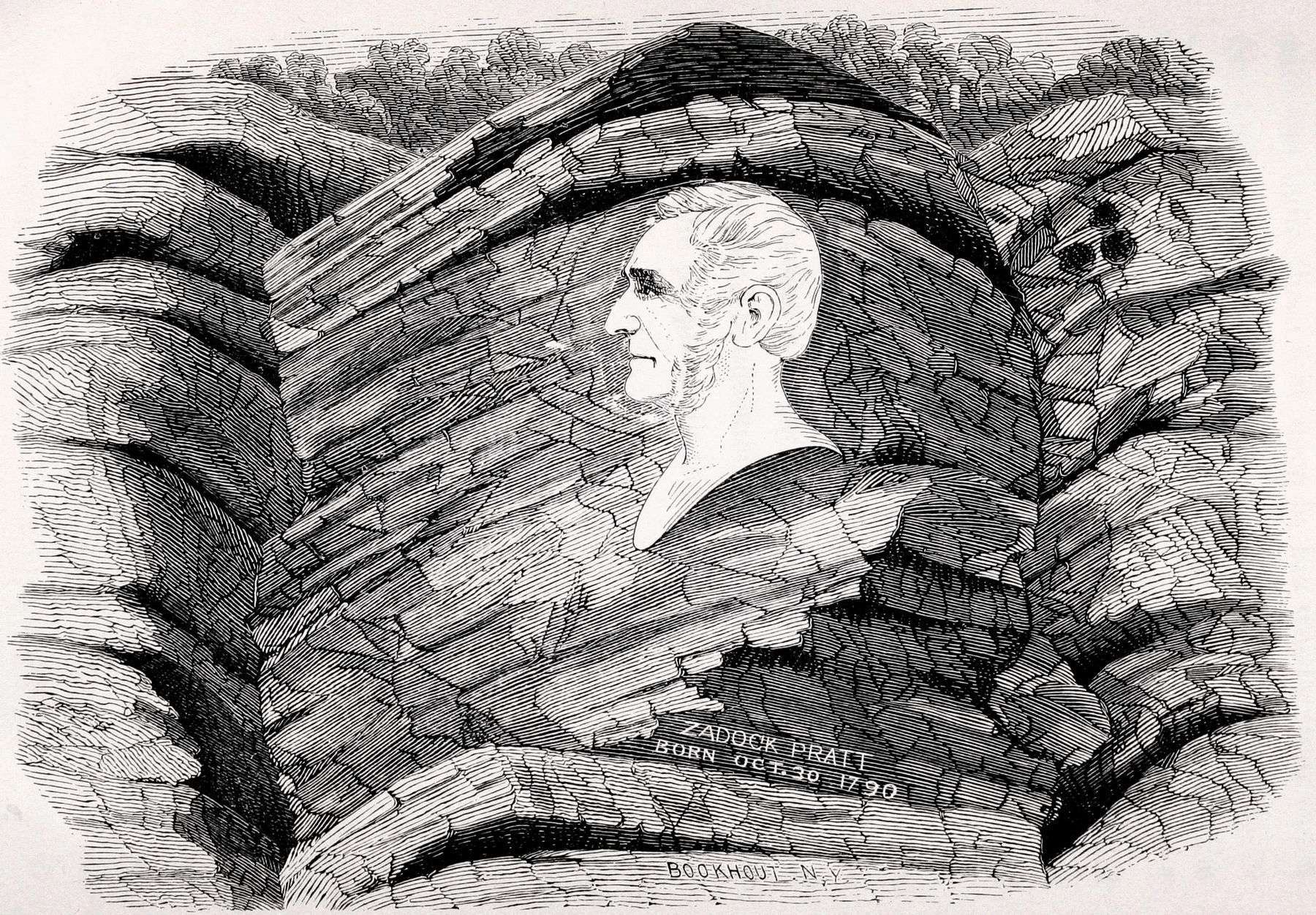 Internet Archive
8. Bust on the Rock
Zadock Pratt
Born Oct. 30 1790
Engraving by Bookhout From Biography of Zadock Pratt of Plattsville N. Y. by Nahum Capen, 1852.
to the life of its founder.

Bottom photos, left to right:
Pratt family residence, built in 1828, shown here as it was seen in 1844. It was restored in 1976 as a museum containing Pratt memorabilia, and special exhibits relating to his life. The public is invited to visit the museum on Main Street, Prattsville

Prattsville Academy, 1842 Zadock Pratt paid for half of the cost of its original construction. The academy was partially destroyed by fire in the winter of 1945.

Episcopal Church, 1845 for which Pratt was builder, trustee, and vestryman

Location. 42° 18.605′ N, 74° 25.367′ W. Marker is in Prattsville, New York, in Greene County. Marker can be reached from Main Street (New York State Route 23), on the right when traveling west. Marker is a little ways up the hill,easily reached from the parking lot beside the road. 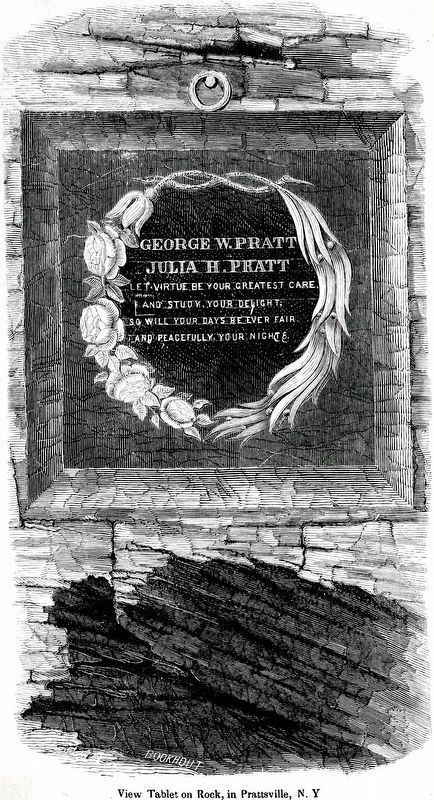 Internet Archive
9. Tablet on the Rock
George W. Pratt
Julia H. Pratt
Let Virtue be your greatest Care
And study, your delight,
So will your days be ever fair
And peacefully, your nights.
Engraving by Bookhout From Biography of Zadock Pratt of Plattsville N. Y. by Nahum Capen, 1852.
Touch for map. Marker is in this post office area: Prattsville NY 12468, United States of America. Touch for directions.

More about this marker. The marker has three sides, arranged as a "T", with a panel on each side

Regarding Pratt Rock. Wow, this place must have been terrible back in the day.