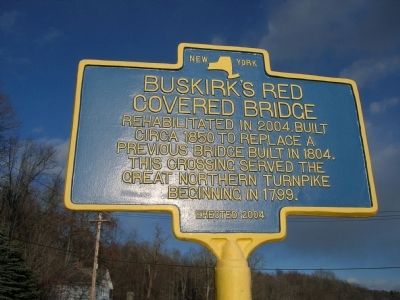 Buskirk's Red
Covered Bridge
Rehabilitated in 2004.Built
Circa 1850 to Replace A
Previous Bridge Built in 1804.
This Crossing Served The
Great Northern Turnpike
Beginning In 1799.

Topics and series. This historical marker is listed in these topic lists: Bridges & Viaducts • Notable Buildings • Roads & Vehicles. In addition, it is included in the Covered Bridges series list. A significant historical year for this entry is 2004.

Location. 42° 57.509′ N, 73° 26.009′ W. Marker is near Buskirk, New York, in Washington County. Marker is at the intersection of Buskirk Road (County Route 59) and Firehouse Road (County Route 103), on the right when traveling east on Buskirk Road. Marker is at the north end of the bridge in Washington County. The Bridge carries county route 103, Fire House Road, across the Hoosick River. (Some maps label this road as West Hoosick Road, or Buskirk West Hoosick Road.). Touch for map. Marker is in this post office area: Buskirk NY 12028, United States of America. Touch for directions. 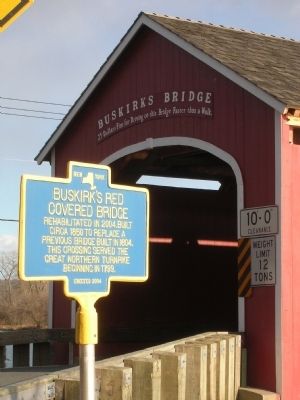 Regarding Buskirk's Red Covered Bridge. The Buskirk Covered Bridge is a 164 foot long single-span, one-lane, Howe-truss wooden covered bridge crossing the Hoosick River between the hamlet of Buskirk (Formerly Buskirk Bridge) in the Rensselaer County Town of Hoosick on the south side of the Hoosick River, and the Washington County Town of White Creek on the north bank of the river. Though some sources state the bridge was build as late as 1880, the historic marker claims a build date of circa 1850. The New York State Covered Bridge Society states the "Buskirk Bridge was originally constructed in 1857 by Peter O. Osterhauth, Charles Newman and James B. Roberts (Primary firm) & Charles F. Ingalls (sub-contractor)." It has a 14-panel, patented, Howe-truss structure consisting of timber diagonals with vertical iron rods. 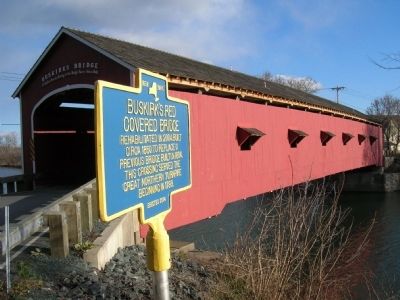 Photographed By Howard C. Ohlhous, November 21, 2008
3. Buskirk's Red Covered Bridge Marker
Troy, NY) to Rutland, Vermont. It crossed the Hoosick River at Buskirk, then known as Tioshoke, and proceeded north. Built to replace an earlier Burr arch truss bridge, the Buskirk Bridge is one of 29 historic covered bridges in New York State, and it is also one of four in Washington County (the other three being the Eagleville, Shushan, and Rexleigh bridges). It was listed on the National Register of Historic Places on March 8, 1978. For nostalgia there is a warning painted on the portal under the title “Buskirks Bridge”; "25 Dollars Fine for Driving on this Bridge Faster than a Walk." Over the years, the bridge has been raised several times to reduce its susceptibility to destruction by flood waters. The bridge was nearly lost in the 1970s when a flood lifted it off its abutments

On August 14, 2002 the Buskirk Covered Bridge was closed to traffic after a severe structural defect was discovered in one of the beams that supports the bridge during a routine annual inspection of the bridge. Washington County engineers decided to close the bridge until repairs could be made. In November of 2003 a construction contract, let for just under $1.8 M, was awarded to Alpine Construction of Stillwater, N.Y. Work on the bridge began in March of 2004. Due to construction delays and additional inspections the cost of the reconstruction of the historic bridge was over $2.5 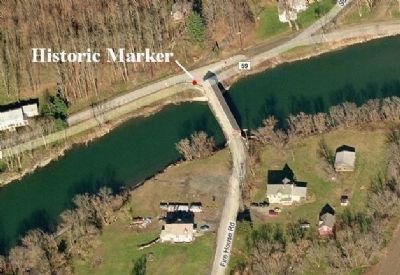 Photographed By MicroSoft Virtual Earth "Bird's Eye View" - Buskirk, NY
4. Buskirk's Red Covered Bridge Marker Location
The text on the photo indicates the location of the marker at the north end of the bridge.
M, nearly twice the original estimate of $1.3 M. Opening of the bridge, initially planned for March of 2005, was postponed until April of 2005. During the rehabilitation work various portions of the native spruce timber chords were either reinforced or replaced; the floor beams were reinforced; the roof system has been replaced; and the wood decking has been replaced. The bridge is now rated for 12 tons with a 10 foot clearance.

The Buskirk Covered Bridge has been assigned "World Guide Numbers" 32-42-02 and 32-58-04 by the National Society for the Preservation of Covered Bridges. 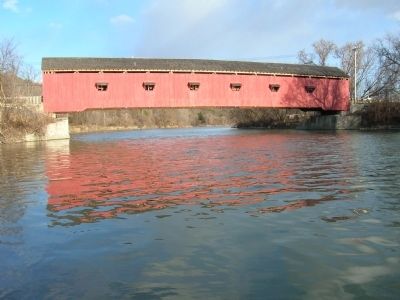 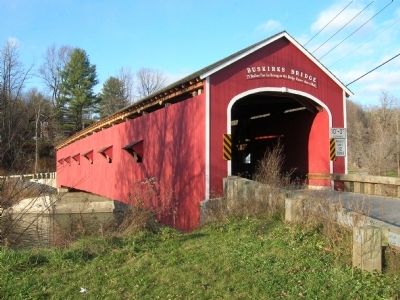 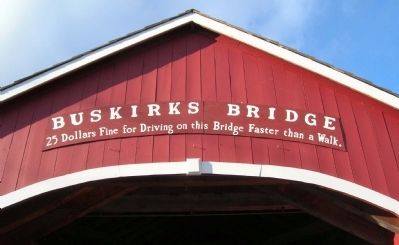 Photographed By Howard C. Ohlhous, November 21, 2008
7. Buskirks Bridge Portal
25 Dollars Fine for Driving on this Bridge Faster than a Walk. 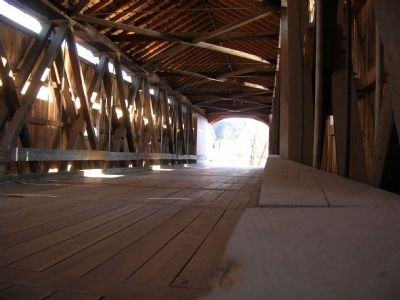