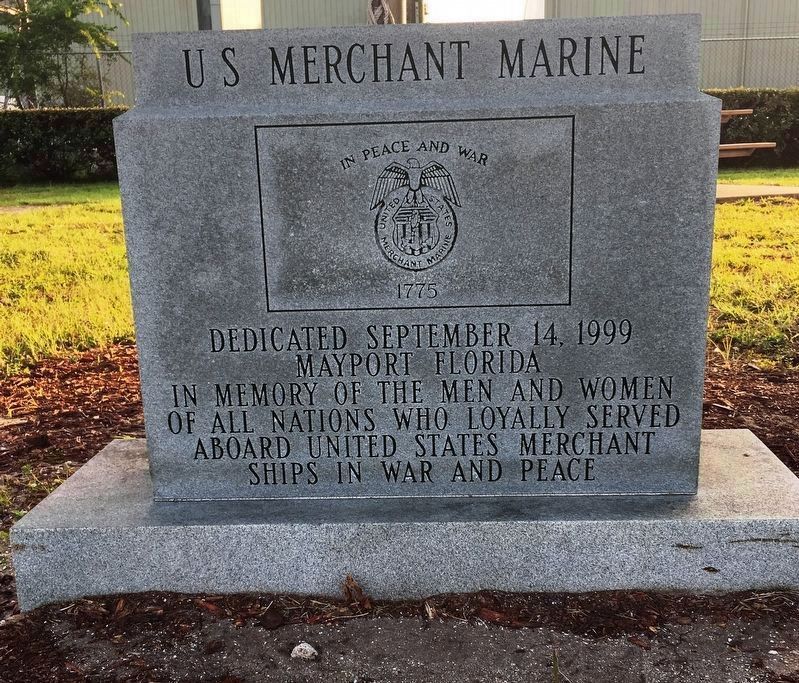 Dedicated September 14, 1999
Mayport Florida
In memory of the men and women of all nations who loyally served aboard United States merchant ships in war and peace

Erected 1999 by Chief Engineer Dominick Bisbano as a private initiative, without the involvement or monetary support of the U.S. Merchant Marine, American Export Lines or the United Fruit Company. 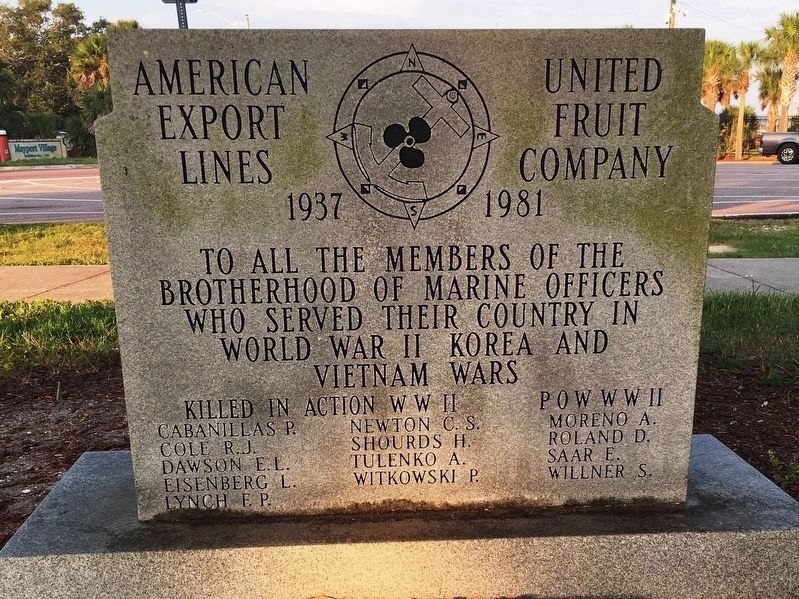 Location. 30° 23.734′ N, 81° 25.745′ W. Marker is in Mayport, Florida, in Duval County. Memorial is at the intersection of Ocean Street (State Road A1A) and Broad Street, on the right when traveling north on Ocean Street. Marker is near Mayport Ferry Landing. Touch for map. Marker is at or near this postal address: 4780 Ocean Street, Atlantic Beach FL 32233, United States of America. Touch for directions.

More about this marker. Chief Engineer Dominick Bisbano, formerly with American Export Lines, had this marker erected on September 14th, 1999. You will find his name carved underneath the base of the monument. 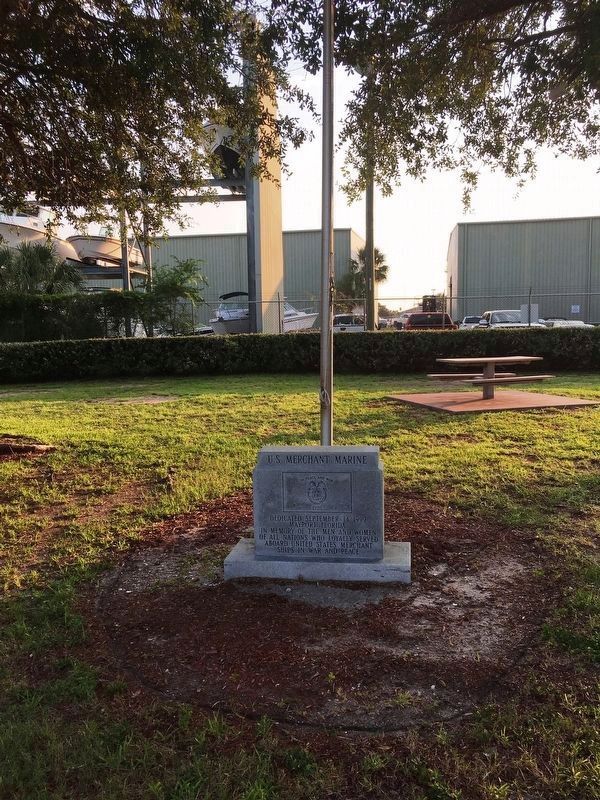 Photographed By Brandon D Cross, August 10, 2019
3. US Merchant Marine Monument
This article has the story of Dennis Roland, memorialized on this monument. Excerpts:

... The injustice these men suffered is illustrated by the story of Dennis A. Roland. Roland was second officer, a navigator, on the old American Export Lines Sawolka that was sunk by a German surface raider in November 1942. ...

The Japanese of that day, unlike the friendly souls who bring us Toyotas and Sony TVs, considered POWs expendable labor. Until liberated, Roland and other POWs, both military and merchant seamen, were forced to build the infamous “railway of death” in the jungles of Burma, Thailand and Malaya. They also built the bridge over the River Kwai, which became the subject of a novel and a movie. ...

When liberation came, Roland weighed 68 pounds and was riddled with disease. His only possessions were a pair of shorts, sandals made out of a truck tire, a tin bowl and a spoon. Of the 1,600 men in his labor battalion, fewer than 300 survived.

The military immediately took charge of the freed POWs from their respective services. Roland was on his own. He finally hitched a ride in the back of an unheated cargo plane flying over the Hump in India and nearly died of pneumonia as a result. ...

Roland’s dead now. He died four years before a federal court [in 1987] finally forced the Defense Department to recognize what 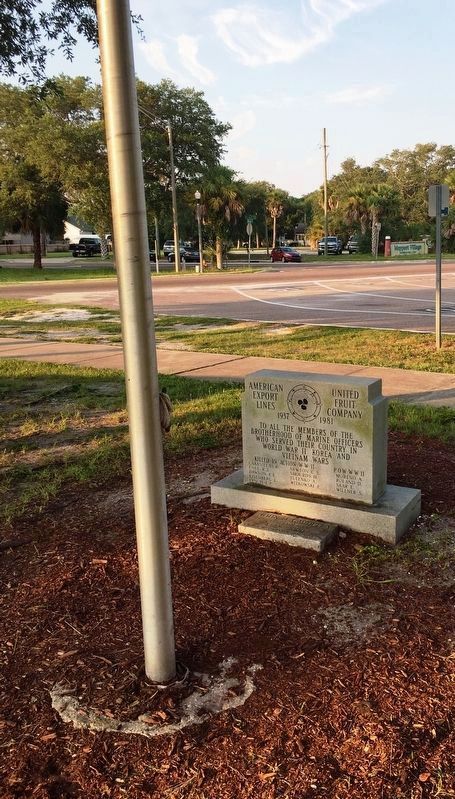 Photographed By Brandon D Cross, August 10, 2019
4. U.S. Merchant Marine Monument
was, in all but bureaucratic name only, combat service in defense of the United States. ...

... When we were liberated all Allied prisoners in the Far East and Murmansk were flown from Singapore etc. to the 142nd Army Hospital in Karachi, India, which is now Pakistan. I was twenty five years old, weighed seventy-four pounds and infected with every disease imaginable. The doctors told me that I would be the luckiest man alive if I lived to be fifty years old. The Army medical care was nearly the last time as a Merchant Marine that I received any U.S. Government benefits for my service. ...

From India on our trip back to the States, the Merchant Seamen were soon forgotten. They received no Government benefits until 1987 when they were awarded veteran’s status. Our captors and our fellow prisoners treated us as military prisoners and made no distinction in our service when they dished out the brutality. Yet our own government would see us as undeserving and would render us invisible in the post war years.

The other POWs were issued new uniforms and given spending money. The Mariners received only one shirt and one pair of pants, plus a pair of shoes. I was unable to wear the shoes. After a month in the hospital we were flown back to the States. The plane stopped in Gander, Newfoundland. A female worker asked me if I wanted some fresh milk. I drank the milk and she charged me $2.00 because I was not in uniform. I had no money.

The plane landed in a military airport outside of Washington, D.C. The military men were met with Honor Guards. The Mariners were left on their own. I was lucky. My wife came to take me home. ...

... As an American engineer said after viewing the project, “What makes this an engineering feat is the totality of it, the accumulation of factors. The total length of miles, the total number of bridges — over 600, including six to eight long-span bridges — the total number of people who were involved (one-quarter of a million), the very short time in which they managed to accomplish it, and the extreme conditions they accomplished it under. They had very little transportation to get stuff to and from the workers, they had almost no medication, they couldn’t get food let alone materials, they had no tools to work with except for basic things like spades and hammers, and they worked in extremely difficult conditions — in the jungle with its heat and humidity. ...” ...

... The prisoners of war “found themselves at the bottom of a social system that was harsh, punitive, fanatical, and often deadly.” The living and working conditions on the Burma Railway were often described as “horrific,” with maltreatment, sickness, and starvation. The estimated number of civilian laborers and POWs who died during construction varies considerably, but the Australian Government figures suggest that of the 330,000 people who worked on the line (including 250,000 Asian labourers and 61,000 Allied POWs) about 90,000 of the laborers and about 16,000 Allied prisoners died. ...

Export Steamship Corporation was organized in 1919 and began operating cargo services to the Mediterranean from New York. The word “American” was added in the 1920s to emphasize its ties to the U.S.. In 1931, they placed in service four cargo-passenger liners, Excalibur, Excambion, Exeter and Exochorda, known as the “Four Aces.” The timing of their new service was unfortunately at the beginning of the Depression. The company went through various reorganizations and became the American Export Lines in 1936. During World War II American Export Lines operated transports for the U.S. War Shipping Administration.

United Fruit had a deep and long-lasting impact on the economic and political development of several Latin American countries. Critics often accused it of exploitative neocolonialism, and described it as the archetypal example of the influence of a multinational corporation on the internal politics of the banana republics. After a period of financial decline, United Fruit was merged with Eli M. Black’s AMK in 1970, to become the United Brands Company. In 1984, Carl Lindner, Jr. transformed United Brands into the present-day Chiquita Brands International.