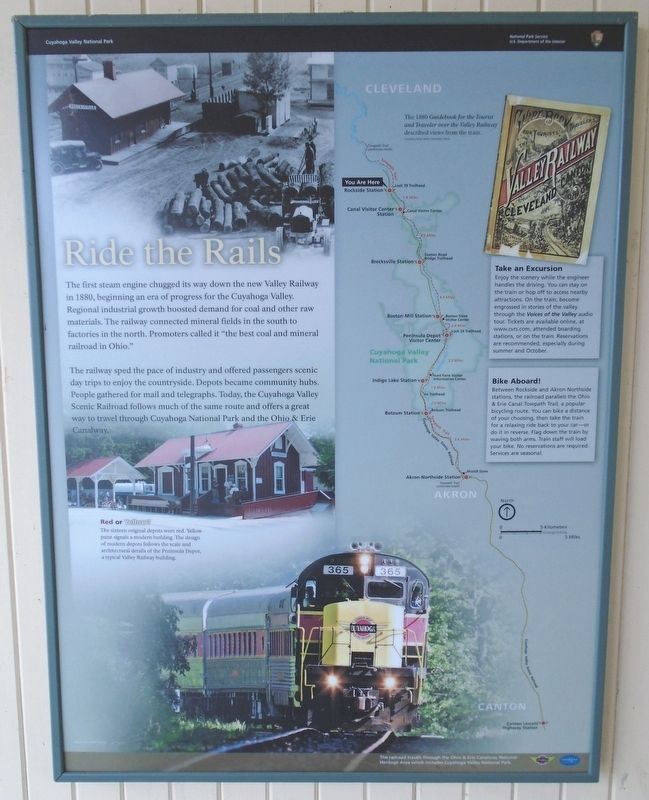 The first steam engine chugged its way down the new Valley Railway in 1880, beginning an era of progress for the Cuyahoga Valley. Regional industrial growth boosted demand for coal and other raw materials. The railway connected mineral fields in the south to factories in the north. Promoters called it "the best coal and mineral railroad in Ohio."

The railway sped the pace of industry and offered passengers scenic day trips to enjoy the countryside. Depots became community hubs. People gathered for mail and telegraphs. Today, the Cuyahoga Valley Scenic Railroad follows much of the same route and offers a great way to travel through Cuyahoga National Park and the Ohio and Erie Canalway.

Red or Yellow? , The sixteen original depots were red. Yellow paint signals a modern building. The design of modern depots follows the scale and architectural details of the Peninsula Depot, a typical Valley Railway building.

[Details on right side of marker] , The 1880 Guidebook for the Tourist and Traveler over the Valley Railway described views from the train.

Take an Excursion , Enjoy the scenery while the engineer handles the driving. You can stay on the train or hop off to access nearby attractions. On the train, become engrossed in stories of the valley through the Voices of the Valley audio tour. Tickets are available online, at www.cvrs.com, attended boarding stations, or on the train. Reservations are recommended, especially during summer and October.

Bike Aboard! , Between Rockside and Akron Northside stations, the railroad parallels the Ohio and Erie Canal Towpath Trail, a popular bicycling route. You can bike a distance of your choosing, then take the train for a relaxing ride back to your car - or do it in reverse. Flag down the train by waving both arms. Train staff will load your bike. No reservations are required. Services are seasonal.

The railroad travels through the Ohio and Erie Canalway National Heritage Area which includes Cuyahoga Valley National Park. . This historical marker was erected by National Park Service. It is in Independence in Cuyahoga County Ohio