Route to the Coalfields 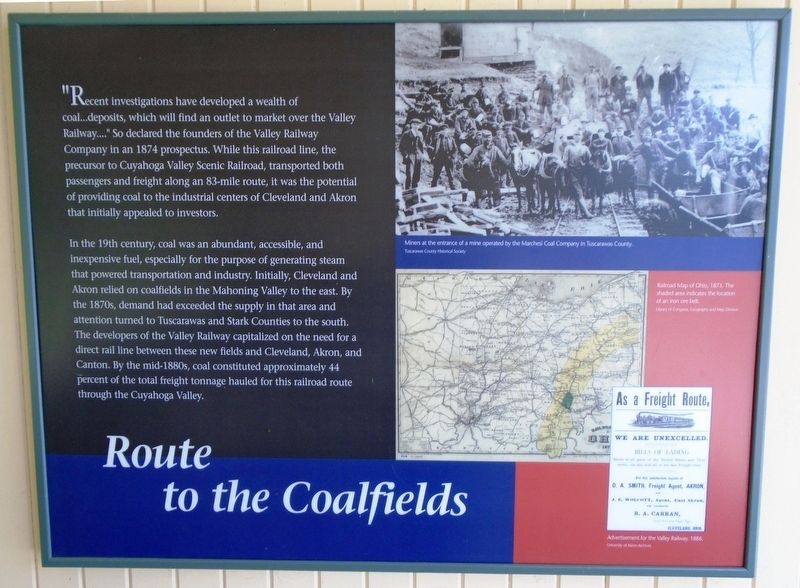 "Recent investigations have developed a wealth of coal...deposits, which will find an outlet to market over the Valley Railway...." So declared the founders of the Valley Railway Company in an 1874 prospectus. While this railroad line, the precursor to Cuyahoga Valley Scenic Railroad, transported both passengers and freight along an 83-mile route, it was the potential of providing coal to the industrial centers of Cleveland and Akron that initially appealed to investors.

In the 19th century, coal was an abundant, accessible, and inexpensive fuel, especially for the purpose of generating steam that powered transportation and industry. Initially, Cleveland and Akron relied on coalfields in the Mahoning Valley to the east. By the 1870s, demand had exceeded the supply in that area and attention turned to Tuscarawas and Stark Counties to the south. The developers of the Valley Railway capitalized on the need for a direct rail line between these new fields and Cleveland, Akron, and Canton. By the mid-1880s, coal constituted approximately 44 percent of the total freight tonnage hauled for this railroad route through the Cuyahoga Valley.

[Right side illustration captions, from top to bottom, read] , . Miners at the entrance of a mine operated by the Marchesi Coal Company in Tuscarawas County.

. Railroad Map of Ohio, 1873. The shaded area indicates the location of an iron ore belt.

. Advertisement for the Valley Railroad, 1886. . This historical marker is in Independence in Cuyahoga County Ohio