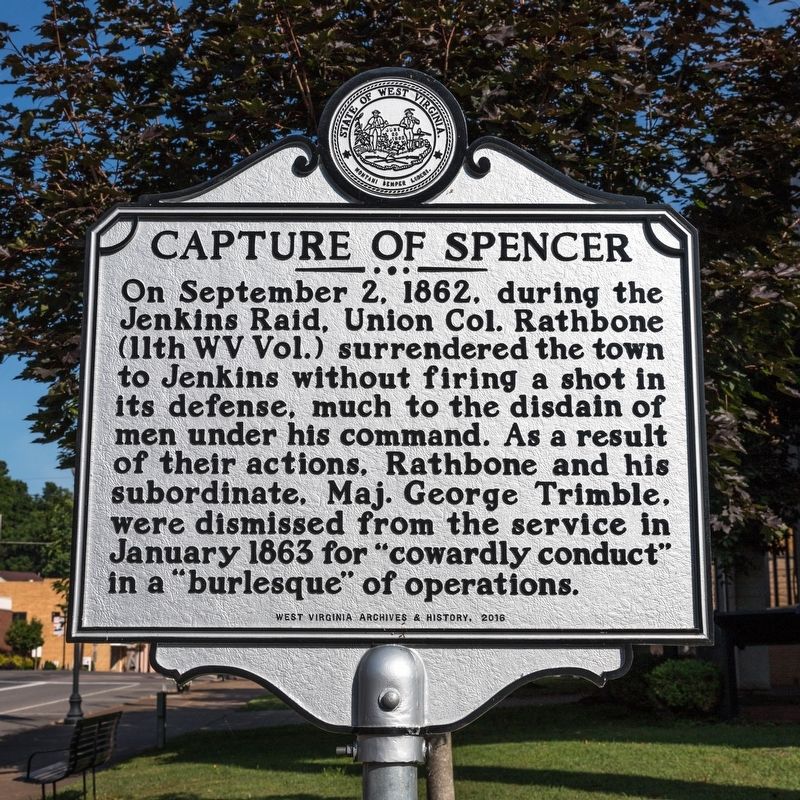 Photographed By J. J. Prats, July 14, 2019
1. Capture of Spencer Marker
Inscription.
Capture of Spencer. . On September 2, 1862, during the Jenkins Raid, Union Col. Rathbone (11th West Virginia Volunteers) surrendered the town of Jenkins without firing a shot in its defense, much to the disdain of men under his command. As a result of their actions, Rathbone and his subordinate, Maj. George Trimble, were dismissed from the service in January 1863 for “cowardly conduct” in a “burlesque” of operations. . This historical marker was erected in 2016 by West Virginia Archives and History. It is in Spencer in Roane County West Virginia

On September 2, 1862, during the Jenkins Raid, Union Col. Rathbone (11th West Virginia Volunteers) surrendered the town of Jenkins without firing a shot in its defense, much to the disdain of men under his command. As a result of their actions, Rathbone and his subordinate, Maj. George Trimble, were dismissed from the service in January 1863 for “cowardly conduct” in a “burlesque” of operations.

Topics and series. This historical marker is listed in this topic list: War, US Civil. In addition, it is included in the West Virginia Archives and History series list. A significant historical month for this entry is January 1863.

Location. 38° 48.108′ N, 81° 21.014′ W. Marker is in Spencer, West Virginia, in Roane County. Marker is at the intersection of Main Street (U.S. 33) and Church Street, on the right when traveling east on Main Street. It is on the courthouse lawn. Touch for map. Marker is in this post office area: Spencer WV 25276, United States of America. Touch for directions. 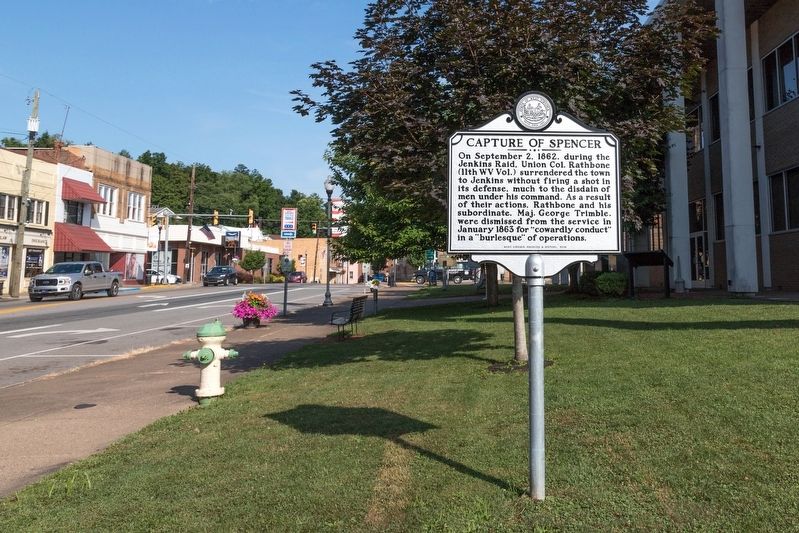 Report of Brig. Gen. Jacob D. Cox, U. S. Army, commanding District of West Virginia, of surrender at Spencer Court-House.
...
On 2d September last Col. J. C. Rathbone, of the Eleventh Virginia Volunteers, was in command at Spencer, having a force of nearly 300 men, chiefly of his own regiment, of which, perhaps, 100 are said to have been unarmed or not armed properly. At about 7 or 8 o'clock in the morning of that day information was received from apparently reliable sources that Jenkins, with a considerable cavalry force, had entered Western Virginia and was advancing upon that post. No precautions were taken; the pickets were not strengthened nor advanced, nor was any step taken by throwing forward a detachment or other- wise to learn the truth or falsity of the report. At 4 or 5 o'clock p. m. a flag of truce was brought within the post to the headquarters of Colonel Rathbone at the court-house, the party consisting of a Major Sweeney, of the rebel army, and two other officers. From the testimony it would seem to have been regarded as a matter of course that the flag party should thus pass within the pickets and be admitted at once to the center of the encampment. The enemy's force was then just beyond the picket, which was half a mile out of the village. The men, who had been on drill at the arrival of the flag, were dismissed to their quarters and the officers of all grades called to the colonel's quarters for a council of war. The men, being left without commissioned officers, ran in every direction, as is testified.

After consultation, in which it appears that all or nearly all the officers advised the colonel to fight, he determined to send one of his officers, Major Trimble, who, as he himself testifies, was born and raised with the rebel Major Sweeney, back with the flag of truce to inspect the enemy's force, which it seems was accommodatingly permitted. During the absence of these officers the surgeon in charge of the hospital asked the colonel if he should display his hospital flag, and was told there would probably be no occasion for it. Up to this time the colonel had not put on his side-arms, ordered his horse to be saddled, or made, so far as appears, any movement, personal or official, which would indicate that he expected to fight the enemy or attempt an orderly retreat. About two-thirds of the men, apprehending that they were to be surrendered, left the place by the rear, scattered, and got safely off.

Just before the return of Major Trimble the men who remained were drawn up in line. A company, which seems to have taken the best defensible position, on an eminence near the town, was ordered down from it, and the colonel received the major's report, which was that escape was impossible; that they were surrounded by about 1,100 of the enemy, and that he advised that no attempt should be made to fight. The major appears to have been very urgent that the surrender should be made, and threatened to arrest a subaltern who still remonstrated. The men were then ordered to stack arms, and the surrender was made without firing a shot.

A little before the surrender, and while the enemy's flag was in the town, a courier was dispatched to a detachment of about 100 men at Ravenswood, on the Ohio, 35 or 40 miles distant, ordering them up as a re-enforcement. This courier passed through safely. The detachment started at a little after midnight, and upon getting within 13 miles of Spencer learned of the surrender, and that the prisoners were taken off on another road. There is no sufficient evidence that the roads to Parkersburg or Ravenswood were occupied by the enemy; on the contrary, it is testified that the country in some directions was entirely impracticable for his cavalry, and his numbers are estimated by witnesses as not over 600.

Such are the facts which the testimony discloses, and I deem it proper and for the advantage of the service to recommend that the proceedings be forwarded to the Secretary of War, with a request that Col. J. C. Rathbone and Maj. George C. Trimble, of the Eleventh Virginia Volunteer Infantry, be dismissed the service.

The whole affair was a burlesque upon military operations, without one redeeming feature. From the receipt of the news of Jenkins' approach in the morning to the receipt of the grossly exaggerated panic-making report of the major in the evening, the reverse of soldierly conduct is proven to have prevailed.