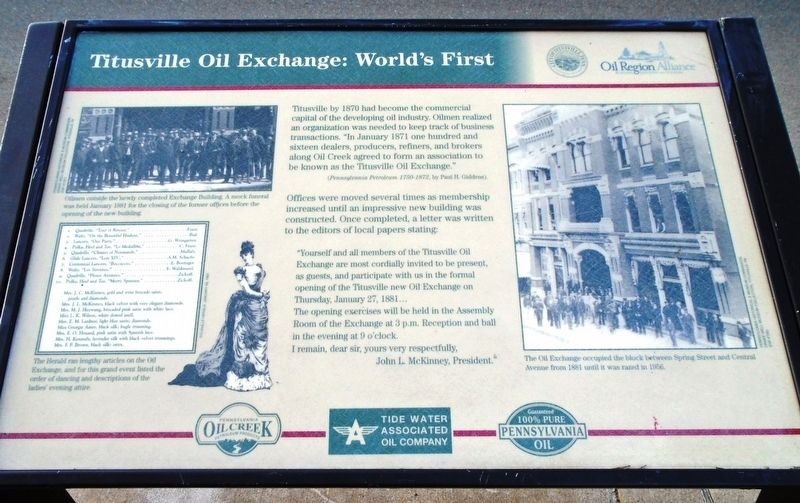 Titusville by 1870 had become the commercial capital of the developing oil industry. Oilmen realized an organization was needed to keep track of business transactions. "In January 1871 one hundred and sixteen dealers, producers, refiners, and brokers along Oil Creek agreed to form an association to be known as the Titusville Oil Exchange." , (Pennsylvania Petroleum 1750-1872, by Paul H. Giddens).

Offices were moved several times as membership increased until an impressive new building was constructed. Once completed, a letter was written to the editors of local papers stating:

"Yourself and all members of the Titusville Oil Exchange are most cordially invited to be present, as guests, and participate with us in the formal opening of the Titusville new Oil Exchange on Thursday, January 27, 1881... , The opening exercises will be held in the Assembly Room of the Exchange at 3 p.m. Reception and ball in the evening at 9 o'clock. , I remain, dear sir, yours very respectfully, , John L. McKinney, President."

[Illustration captions, clockwise from right, read] , . The Oil Exchange occupied the block between Spring Street and Central Avenue from 1881 until it was razed in 1956.

. The Herald ran lengthy articles on the Oil Exchange, and for this grand event listed the order of dancing and descriptions of the ladies' evening attire.

. Oilmen outside the newly completed Exchange Building. A mock funeral was held January 1881 for the closing of the former offices before the opening of the new building. . This historical marker was erected by Oil Region Alliance and City of Titusville. It is in Titusville in Crawford County Pennsylvania