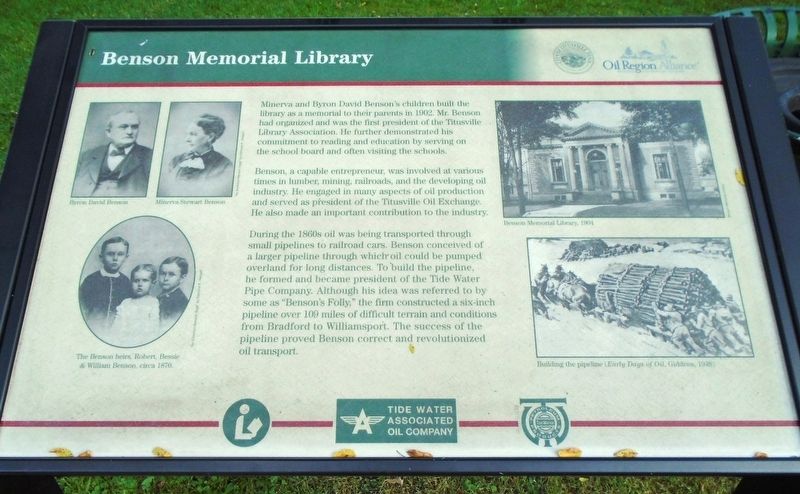 Minerva and Byron David Benson's children built the library as a memorial to their parents in 1902. Mr. Benson had organized and was the first president of the Titusville Library Association. He further demonstrated his commitment to reading and education by serving on the school board and often visiting the schools.

Benson, a capable entrepreneur, was involved at various times in lumber, mining, railroads, and the developing oil industry. He engaged in many aspects of oil production and served as president of the Titusville Oil Exchange. He also made an important contribution to the industry.

During the 1860s oil was being transported through small pipelines to railroad cars. Benson conceived of a larger pipeline through which oil could be pumped overland for long distances. To build the pipeline, he formed and became president of the Tide Water Pipe Company. Although his idea was referred to by some as "Benson's Folly," the firm constructed a six-inch pipeline over 109 miles of difficult terrain and conditions from Bradford to Williamsport. The success of the pipeline proved Benson correct and revolutionized oil transport.

. The Benson heirs, Robert, Bessie and William Benson, circa 1870.

. Building the pipeline (Early Days of Oil, Giddens, 1948) . This historical marker was erected by Oil Region Alliance and City of Titusville. It is in Titusville in Crawford County Pennsylvania