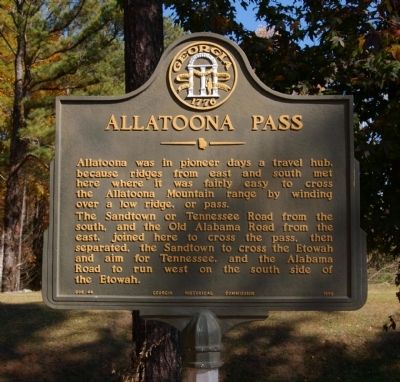 Photographed By David Seibert, November 9, 2008
1. Allatoona Pass Marker
Inscription.
Allatoona Pass. . Allatoona was in pioneer days a travel hub, because ridges from east and south met here where it was fairly easy to cross the Allatoona Mountain range by winding over a low ridge, or pass. , The Sandtown or Tennessee Road from the south, and the Old Alabama Road from the east, joined here to cross the pass, then separated, the Sandtown to cross the Etowah and aim for Tennessee, and the Alabama Road to run west on the south side of the Etowah. . This historical marker was erected in 1956 by Georgia Historical Commission. It is in Allatoona in Bartow County Georgia

Allatoona was in pioneer days a travel hub, because ridges from east and south met here where it was fairly easy to cross the Allatoona Mountain range by winding over a low ridge, or pass.

Topics and series. This historical marker is listed in these topic lists: Roads & Vehicles • Settlements & Settlers. In addition, it is included in the Georgia Historical Society series list.

Location. 34° 6.846′ N, 84° 42.919′ W. Marker is in Allatoona, Georgia, in Bartow County. Marker is on Old Allatoona Road, 0.2 miles north of Allatoona Landing Road, on the left when traveling east. Touch for map. Marker is in this post office area: Acworth GA 30101, United States of America. Touch for directions.

Other nearby markers. At least 8 other markers are within walking distance of this marker. Battle of Allatoona (here, next to this marker); 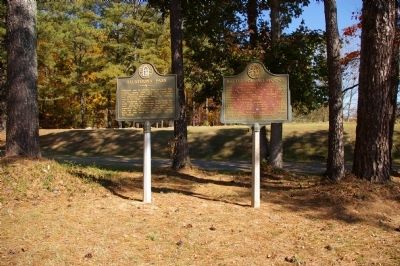 Photographed By David Seibert, November 9, 2008
2. Allatoona Pass and Battle of Allatoona Markers
The old W&A Railroad bed is behind the markers; it is now a Federal trail. The levee for Lake Allatoona is behind the railroad bed.

Regarding Allatoona Pass. Immediately north of the town of Allatoona was the Allatoona Pass or Deep Cut, for the Western & Atlantic Railroad tracks. At its deepest point the Allatoona Pass penetrates 95 feet of solid rock and another 85 feet of earth. Its average width is about 60 feet, and it extends for approximately 360 feet.

At the time of the Battle of Allatoona there were forts on top of either side of Allatoona Pass; these were held by the Union Army. 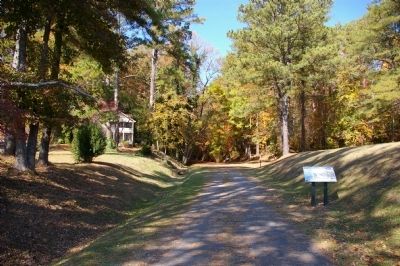 Photographed By David Seibert, November 9, 2008
3. Allatoona Pass
Looking north toward the Allatoona Pass, not visible through the trees. The Allatoona Pass Marker is just to the left of this photo. This photo is taken from the same location as a well known photo by George N. Barnard taken in 1864. Barnard was Sherman's photographer, accompanying his army. 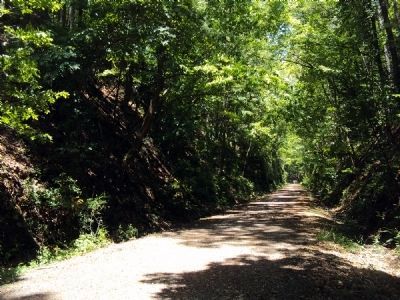