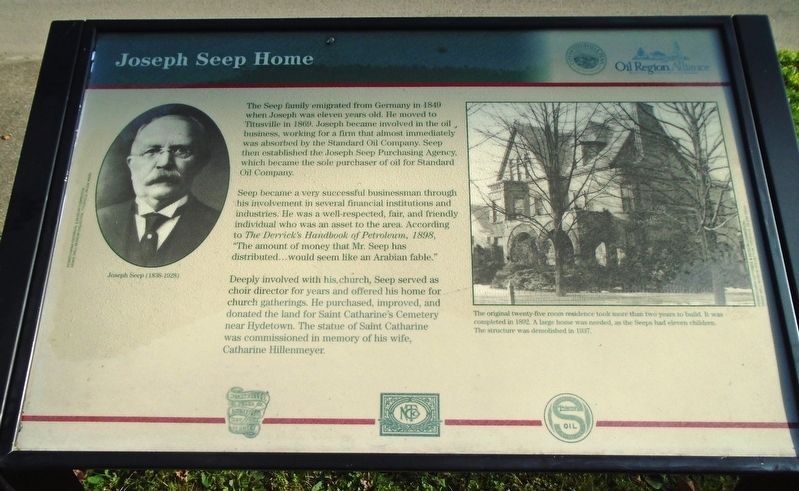 The Seep family emigrated from Germany in 1849 when Joseph was eleven years old. He moved to Titusville in 1869. Joseph became involved in the oil business, working for a firm that almost immediately was absorbed by the Standard Oil Company. Seep then established the Joseph Seep Purchasing Agency, which became the sole purchaser of oil for Standard Oil Company.

Seep became a very successful businessman through his involvement in several financial institutions and industries. He was a well-respected, fair, and friendly individual who was an asset to the area. According to The Derrick's Handbook of Petroleum, 1898, "The amount of money that Mr. Seep has distributed...would seem like an Arabian fable."

Deeply involved with his church, Seep served as choir director for years and offered his home for church gatherings. He purchased, improved, and donated the land for Saint Catharine's Cemetery near Hydetown. The statue of Saint Catharine was commissioned in memory of his wife, Catharine Hillenmeyer.

. The original twenty-five room residence took more than two years to build. It was completed in 1892. A large home was needed, as the Seeps had eleven children. The structure was demolished in 1937. . This historical marker was erected by Oil Region Alliance and City of Titusville. It is in Titusville in Crawford County Pennsylvania