By Brian Scott, November 27, 2008
1. Ford Country Marker
Inscription.
Ford Country. . . During the Revolutionary War, river fords were a vital resource in controlling communication and transportation in the South Carolina backcountry. With few bridges or roads, these fords offered a tremendous tactical advantage to whomever possessed them. After capturing Charles Towne in May of 1780, the British sent Loyalist militias to backcountry fords to secure these strategic locations. When a group of Loyalists secured the ford at Musgrove's Mill, they unwittingly set the stage for the battle that took place here on August 19, 1780. . This historical marker was erected by South Carolina Park Service. It is in Clinton in Laurens County South Carolina

During the Revolutionary War, river fords were a vital resource in controlling communication and transportation in the South Carolina backcountry. With few bridges or roads, these fords offered a tremendous tactical advantage to whomever possessed them. After capturing Charles Towne in May of 1780, the British sent Loyalist militias to backcountry fords to secure these strategic locations. When a group of Loyalists secured the ford at Musgrove's Mill, they unwittingly set the stage for the battle that took place here on August 19, 1780. 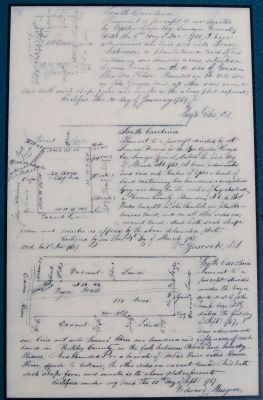 By Brian Scott, November 22, 2008
2. 1767 Plat of Land on the Enoree River
the Musgrove Mill State Historical Site. From the marker, one will turn to the west and follow the Enoree River for most of the remainder of the trail. Touch for map. Marker is in this post office area: Clinton SC 29325, United States of America. Touch for directions. 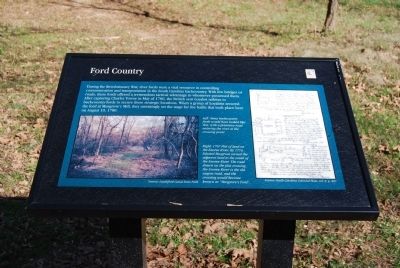 By Brian Scott, November 22, 2008
3. Ford Country Marker
By 1774, Edward Musgrove owned the adjacent land to the south of the Enoree River. The road drawn on the plat crossing the Enoree River is the old wagon road, and the crossing would become known as "Musgrove's Road".


3. Enoree River. The Enoree River is a tributary of the Broad River, 85 mi (137 km) long, in northwestern South Carolina in the United States. (Submitted on November 25, 2008, by Brian Scott of Anderson, South Carolina.)

4. Musgrove's Mill Historic Battle Site. The battle of Musgrove’s Mill, fought on August 18, 1780, was an early American victory in the South during the Revolution. (Submitted on October 14, 2009, by Brian Scott of Anderson, South Carolina.)

6. Isaac Shelby. Isaac Shelby (December 11, 1750 – July 18, 1826) was the first and fifth Governor of the U.S. state of Kentucky and served in the state legislatures of Virginia and North Carolina. (Submitted on October 16, 2009, by Brian Scott of Anderson, South Carolina.) 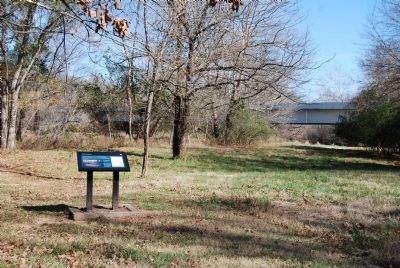 By Brian Scott, November 22, 2008
4. Ford Country Marker
The bridge in the distance is the Battle of Musgrove's Mill Memorial Bridge (SC Highway 56).
Mill, South Carolina (August 18, 1780)
After McDowell had captured the Loyalists at Thicketty Fort, he sent Shelby and Clarke to disperse an assembly of Loyalists camped at Musgrove's Mill, on the Enoree River. The enlistments of the men with Shelby were almost up, and he wanted to get one more engagement in before they returned home. Unlike Gates and his army, Shelby's men had been eating well. William Smith was with the Patriots and told Draper that "Roasting ears were plenty ... a week or two before the fight at Musgrove's Mills."

Shelby left Smith's Ford at around sunset. Along the way Colonel James Williams and some of Sumter's men joined them.569 The militia army "travelled through the woods until nearly dark then took the road, & traveled fast all night, a great part of the way in a canter, never stopped even to let their horses drink, & arrived within 1/2 mile of the enemy camp just at the break of day." They had rode forty miles in one night, and passed within four miles of Major Patrick Ferguson's camp.

Hill wrote "The Americans after a hard travel all night of 40 miles, or upwards were too much broke down 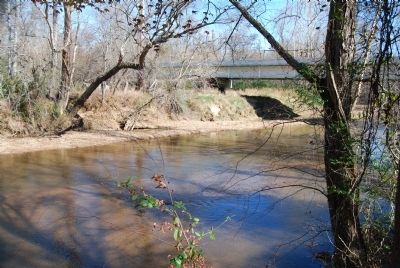 By Brian Scott, November 22, 2008
5. Enoree River Looking East to the Battle of Musgrove's Mill Memorial Bridge
The ford referenced in the marker was in this general area.
to retreat." Shelby decided to lure the Provincials into an ambush and annihilate them. Shelby, Williams and five to six men went out on a reconnaissance and ran into a five man Loyalist patrol that was returning to their camp.

The two sides fired at each other. The Patriots killed one Loyalist and wounded two others. The two Loyalist survivors rode back to their camp and warned them that the backwoodsmen were near. Shelby's scouts had two slightly wounded, and they returned to the main force.

Shelby immediately fell back and set up a defensive line on a low ridge across the road. He had his men fell trees and make breastworks. They realized they were now outnumbered two to one and the best chance of survival was to erect fortifications, hold off the British throughout the day, and then try to get away under cover of night.

The backwoodsmen formed a semi-circular defense along a ridge that was 300 yards long. In thirty minutes the breastworks were chest-high. Shelby commanded the right of the defense, with his North Carolinians. Colonel James Williams had his South Carolinians in the center, and Colonel Elijah Clarke and his Georgians were on the left. Two small mounted detachments of twenty horsemen were placed on the flanks. These men were under the command of Josiah Culbertson and were hidden from the view of the Loyalists. Clarke also had a reserve 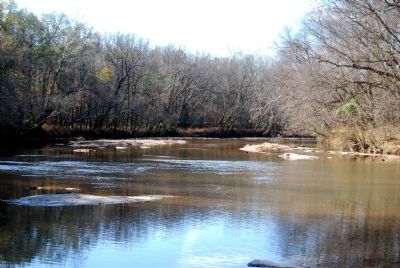 By Brian Scott, November 22, 2008
6. Enoree River Further Upstream Looking West
force of forty men to the rear of the line. Like similar backwoods battles there was no overall commander, and Clarke, Shelby and Williams worked together.

Lieutenant Colonel Alexander Innes was in command of the Loyalists, and quickly convened a council of war at the home of Edward Musgrove. Innes wanted to immediately attack, but Major Fraser and two other officers wanted to wait until after breakfast because 100 mounted men would return from a patrol. Innes overruled them, and immediately set out "to bag" the backwoodsmen. Innes left 100 men to guard the camp, and moved forward in three columns.

Captain Shadrick Inman asked to go forward to skirmish with the enemy, and Shelby sent him with twenty-five expert riflemen to ride close to the approaching Loyalists, and open fire on their three wings. "The sound of their drum and bugle horns soon announced their movements." Inman fired upon the approaching Loyalists, and then fell back, drawing the Loyalists towards the defensive line. He engaged a second time, and drew back, then engaged a third time. The Loyalists dismounted their horses at 150 yards, fired a volley and then advanced with their bayonets shouting "Huzza for King George!"

Shelby had the Patriots withhold their tire until the Loyalists were seventy yards away. 570 McJunkin wrote that the command was "Reserve your fire until you can see 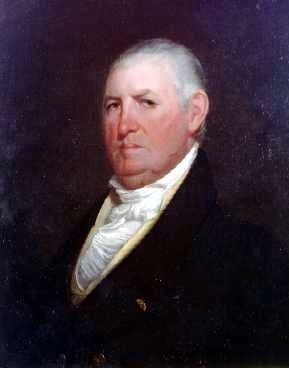 The backwoodsmen opened up with a devastating volley on the Loyalists who were "in full exposure to the American riflemen." The rifles at that range tore through the Loyalist line and they fell back and rallied, then advanced again. It took an hour, but the Provincials came from the left flank, and drove Shelby's men from their breastworks by bayonet.

Clarke sent in the reserve force of forty men, and the Provincials began withdrawing. There rose above the battle wild shouts that chilled the Loyalists blood, sounds they would always remember. Captain Abraham DePeyster called the backwoodsmen the "yelling boys." Shelby's men came on giving the shrill Indian war cry, which in another war would be known as the "Rebel yell." Culbertson's horsemen burst out of their hiding place, and charged with Clarke's riflemen. Clarke was wounded in the exchange.

William Smith, a rifleman with the Over the Mountainmen, shot Alexander Innes through the back of the neck. Smith yelled above the noise of battle, "I've killed their commander." Innes had beer shot in both the neck, and in the thigh, which broke the bone. H was quickly taken to the rear. Major Fraser, of the Royalists, w shot out of his saddle by another frontier rifleman, 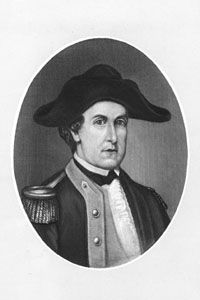 Hargrett Rare Book and Manuscript Library, University of Georgia Libraries
8. Lt. Col. Elijah Clarke
(1742-1799)
Georgia House of Representatives 1781-1790
Robert Beene. Captain Hawsey, a noted leader of the Loyalist militia, was shot down. All of the officers in the New Jersey Volunteers were, wounded in this counterattack.

Colonel William Hill wrote that "This action was one of the hardest ever fought in the United States with small arms. The smoke was so thick as to hide a man at a distance of 20 yards."

The fighting was so confusing that Loyalist militia commander, Colonel Clary, had his horse grabbed by two of Clarke's men. Looking down on the men he yelled, "Damn you, don't you know your own officers!" and was released. Clary then rode to safety. The Loyalist militia saw the Provincials being forced back, and turned and fled. Hill wrote, "The Tories upon the fall of Capt Hawsey broke in great confusion."

The Provincials noticed that they carried on the fight alone, and retreated, running towards the river with the militia. Hill noted "The slaughter from thence to the Enoree River about half a mile was very great. Dead men lay thick on the ground over which our men pursued the enemy." The fighting only lasted fifteen minutes, and it was a complete rout. Hill wrote that the battle had been "bloody & obstinate for upwards of an hour & a half." Inman was killed as he pursued the Loyalists. Draper wrote "He received seven shots from the Tories, one, a musket ball, piercing his forehead."

Golding Tinsley was in the fight and he told L. Miles "they Killed many British & Tories as they fled across the Stream & shot them while in the act of crossing. After they had got over one fellow squatted down, turned his buttock & slapped in derision at the Americans. Tinsley's commander said to him "Cant you turn that fellow over?" Tinsley replied, "I can try." Tinsley had a good rifle, sat down, took good aim, shot & turned him over. They took him up & carried him off."

Shelby was determined to continue with his force to the British post at Ninety-Six, twenty-five miles away, but an express rider from General McDowell told him of the defeat of Gates. Shelby knew that Patrick Ferguson would be coming soon. He mounted the prisoners double with his militia, made them carry their weapons with the flints removed, and withdrew to the northwest. The backwoodsmen rode for 100 miles in the next 48 hours, without stopping for a rest. Hill wrote, "The excessive fatigue to which they were subjected two nights & two days effectually broke down every officer so that their faces & eyes swelled & became so bloated in appearance as scarcely to be able to see." Major John Alexander said, "He was without food for nearly four days. When his engagements permitted and the opportunity offered he pulled some corn and ate it raw and found it delicious."

Riding for that distance was a good choice, since the early morning patrol of 100 Loyalists returned and quickly rode to the battlefield, only to find that Shelby was gone. The Loyalist's patrol became an ambulatory detail to remove the wounded to the newly created hospital at Musgrove's home.

Most of the casualties were from the Loyalist and Provincial forces. One of the reasons for the differences in the losses of both sides may have been because the Loyalists were firing downhill towards the Patriots.

Lyman Draper commented "forest hunters...often shoot too high when their object is below them." Richard Thompson "stated that there were marks of battle for· two miles along the road on the east side of the river and that he made this observation in regard to the shooting of the different parties: The marks of the balls shot by the Whigs on the trees were generally form three to five feet above the ground, while their antagonists had generally shot entirely above the heads of the Whigs."